IRSYAD FATWA RAMADHAN EDITION SERIES 104: THE RULING OF PERFORMING TARAWIH PRAYER OF 4 RAKAAT WITH ONE SALAM 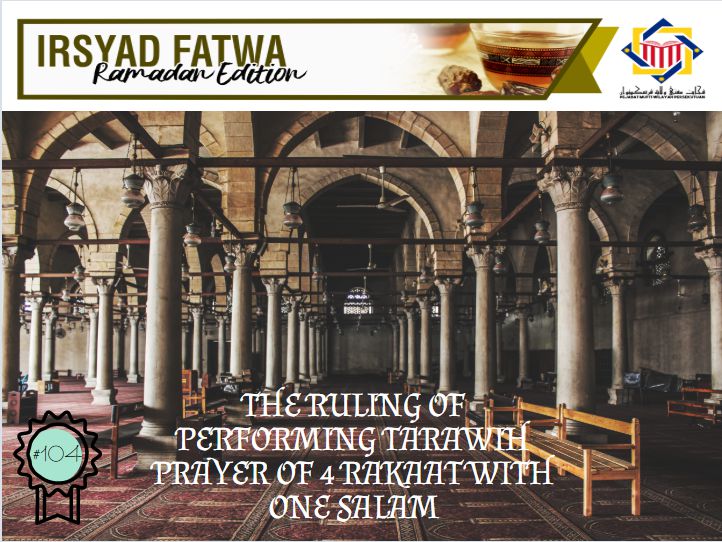 Assalamu‘alaikum SS Datuk Mufti. I want to ask regarding tarawih prayer of 4 rakaat with one salam. Is this permissible?

Scholars have differing opinions regarding this issue:

Mazhab Syafi’e: According to Imam Nawawi, tarawih prayer of 4 rakaat with one salam is invalid, and this is the fatwa issued by Qadhi Husain, for it contradicts what has been stated by syara’ (khilaf al-masyru’). Terawih prayer must be performed with 2 rakaat and one salam. (Refer Al-Majmuk Syarh al-Muhazzab, 4/32)

This is in accordance with the hadith of the Prophet PBUH:

“Salat during the night (terawih) should consist of pairs…”

Imam Ramli further explains, tarawih prayer of 4 rakaat with one salam is invalid if it is performed purposely. If not, then it is considered as sunnah mutlaq (general Sunnah). Refer Nihayatul Muhtaj, 2/127). Syeikh Zakariyya al-Ansari said, 4 rakaat sunnah prayer is the same as the obligatory prayer, thus, it is impermissible (Refer Fathul Wahhab bi Syarh Minhaj at-Thullab, 1/67).

Mazhab Hanafi: The opinion of Hanafiyyah scholars state, if someone perform the entirety of his tarawih prayer with one salam, then his prayer is valid, however, it is makruh (undesirable) if it is performed purposely.

However, according to Muhammad bin Hasan al-Syaibani, his prayer is invalid. This opinion is different from the opinion of Imam Abu Hanifah himself and Qadhi Abu Yusuf both ruled the prayer valid. Then, it is enough to give salam on the final rakaat of tarawih prayer. (Refer Bada’ie as-Sona’ie, 1/289)

Mazhab Hanbali: According to al-Marwadi, it is prioritized in performing sunnah prayer with two rakaat and one salam, however, if more rakaat is performed, then it is still valid. (Refer Al-Insaf fi Ma’rifat ar-Rajih minal Khilaf, 2/186 and Al-Mausu’ah AL-Fiqhiyyah al-Kuwaitiyyah, 27/144-145)

However, the above hadith does not refute the fact that the Prophet PBUH sit for every two rakaat and give salam according to the Prophet PBUH words: “Salat during the night (tarawih) should consist of pairs…”. And it is impossible for the Prophet PBUH to teach something and practise the opposite. This is the opinion of Imam Al-Zarqani. (Refer Syarh Al-Zarqani ala Muwatto Al-Imam Malik, 1/432)

However, considering the issue is a khilaf muktabar (accepted differing opinions by scholars), then we should adopt an accepting attitude. For those who hold the opinion from other mazhab, then we should not prohibit or rebuke them.