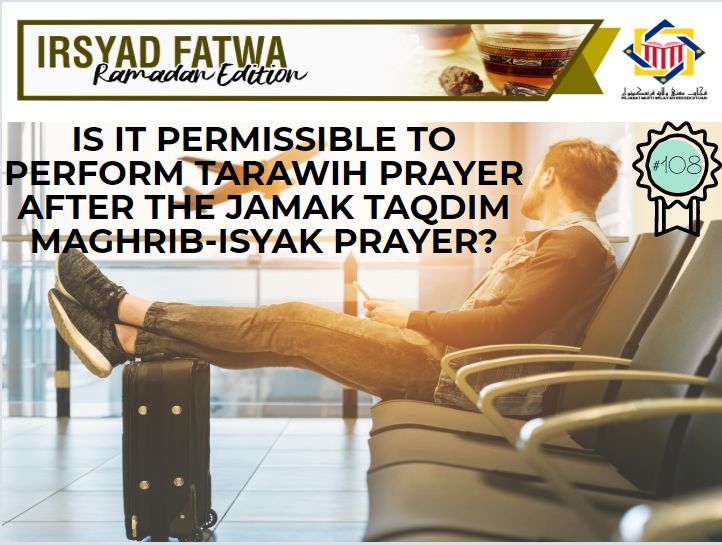 Assalamu‘alaikum SS Datuk Mufti. If I am travelling and perform the jamak taqdim of Maghrib-Isyak prayer, is it permissible for me to straight away perform the tarawih and witir prayer or should I wait until the Isyak prayer time to perform my tarawih? Thank you. Happy fasting!

Regarding the time for the sunnah witir prayer, it starts after the Isyak prayer until sunrise. The same is for tarawih prayer which analogically deduced (qiyas) with witir prayer. This is in accordance with the hadith of the Prophet PBUH:

“Indeed, Allah has add a prayer for you, which is the Witir prayer, thus, you should perform it after the Isyak prayer until sunrise.”

Hence, when someone perform the jamak taqdim by grouping the Isyak prayer together with Maghrib prayer during the Maghrib prayer time, it is permissible for him to perform the tarawih and witir prayer after the Isyak prayer. This fact is stated in the book Busyra al-Karim Syarh al-Muqaddimah al-Hadhramiyyah (pg.313 & 316) by Syeikh Sa`id Ba `Isyn al-Hadhrami Rahimahullah:

“(And the time – for witir prayer is between the Isyak prayer) even if the prayer is done by jamak taqdim (and sunrise) according to both salaf (predecessor) and khalaf (later) scholars.”

“(And the time – for tarawih prayer) is between after the Isyak prayer, even if it is jamak taqdim, and ends with the rise of the sun, the same as the witir prayer.”

Nonetheless, the scholars teach us to delay the tarawih. Syeikh Umairah Rahimahullah said: “Performing it right after the Isyak prayer (early) is the bidaah of the people who are lazy.”

Imam Syihabuddin al-Ramli Rahimahullah said in al-Imdad Syarh al-Irsyad: “The chosen opinion for the time of tarawih prayer is after the fourth of the night.”

Hence, answering the above question, it is permissible for someone to straight away perform the tarawih prayer after performing the jamak taqdim prayer of Isyak in the time of the Maghrib prayer. This is to ensure the ease for someone in his travels in R&Rs but at the same time grabbing the opportunity of worship the blessed month of Ramadhan. The tarawih prayer can also be performed in one’s car taking the facilitation of someone who is travelling. It is not an issue. May Allah SWT accept our worship during this blessed month of Ramadhan. Amin.