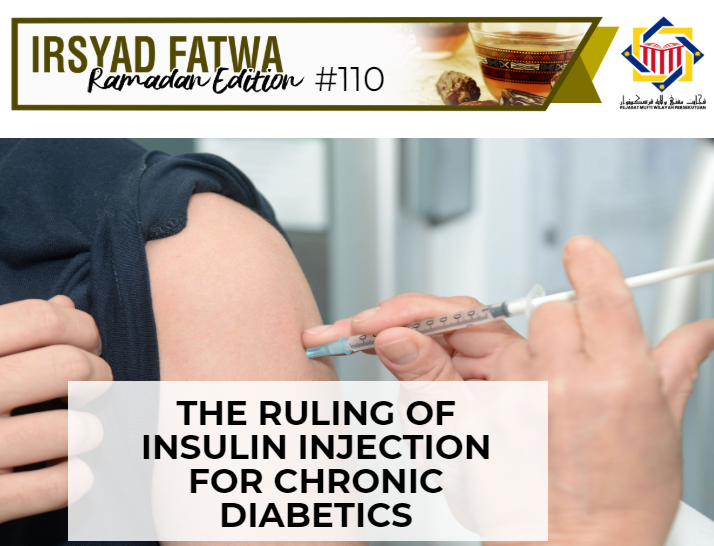 Assalamu‘alaikum. What is the ruling of injecting insulin for diabetes patients during the day in Ramadhan?

Among the things invalidate fasting is purposely inserting anything inside any open cavity of the body. Ibnu Ruslan states in his matan:

Imam al-Nawawi said: “Among the things that invalidate fasting is the insertion of anything into any open cavity of the body.” Refer Raudhah Al-Talibin Wa ‘Umdah Al-Muftin (2/356)

Answering the question asked, insulin is a type of hormone produced by the pancreas responsible in controlling the blood sugar level in our body. Diabetes is a type of sickness where the body fails to properly produce insulin, or the insulin cannot be properly utilized by the body. Insulin injections are administered to help in maintaining the blood sugar level in the body. [1]

Scholars have discussed the issue of injecting any type of substances inside the body during the day in Ramadhan.

“Whoever forgets that he is fasting, and eats or drinks is to complete his fast, as it was Allah who fed him and gave him something to drink.”

Imam al-Nawawi states that the above hadith is the evidence used by most scholars. If someone eats, drinks, or have intercourse unintentionally (because he forgets that he was fasting or accidentally) during the day in Ramadhan, then it does not invalidate his fast. (Refer Al-Minhaj Syarh Sohih Muslim, 8/35). However, if it is on purpose, then the fast is invalid.

The same applies to nutrient injections during the day in Ramadhan, it invalidates the fast. This is the statement made by Imam al-Nawawi in his book al-Majmu’. (Refer Al-Majmu’ Syarh Al-Muhazzab, 6/313)

This is the opinion of most Syafi’iyyah, Hanafiah and some scholars of madhhab Hanbali. Syeikh Mansur al-Buhuti said: “The harms (things that invalidate fasting) of fasting is rectal injection. This is an act that invalidates fasting for it results in the insertion of something into a body cavity, for it is equivalent to directly inserting something inside a human cavity. The same is applicable where the fast is invalid if the treatment is through a mean where the medicine will reach and enter a human cavity. The reason is treatment is a choice of a person.” Refer Kassyaf Al-Qina’ ‘an Matn Al-Iqna’ (2/318)

We advise that the insulin is not injected at the stomach or buttocks. These two areas are close and connected to the cavity. However, it should be reminded that the side effect of insulin injection is hypoglycaemia, which decreases the sugar levels in a patient’s body which could weaken him. In this situation, the patient is given a choice of breaking his fast and replacing it later. This is in accordance with the statement of Allah SWT:

“[Fasting for] a limited number of days. So, whoever among you is ill or on a journey [during them] - then an equal number of days [are to be made up].”

We recommend diabetics such as the questioner to refer to a medical expert and get the advice on the correct and appropriate way of performing the insulin injection as to benefit from it without resulting or causing any harm.

We end with a supplication to Allah SWT so that all of us are granted with health: