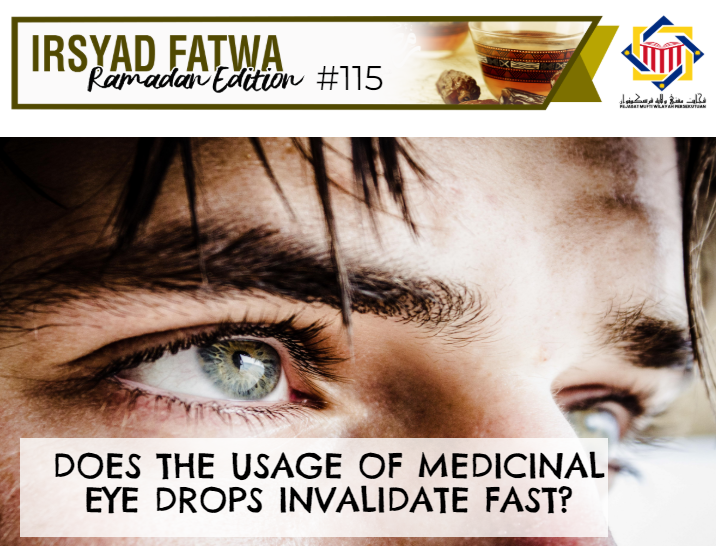 Assalamualaikum. If a person uses some eye medication (eye drops), does this invalidate his fast?

In discussing this topic, we should first consider the matters which invalidate fast as stated in Fiqh al-Manhaji:

“If one has a sudden attack of vomiting while one is fasting, no atonement is required of him, but if he vomits intentionally, he must make atonement.”

“And eat and drink until the white thread of dawn becomes distinct to you from the black thread [of night]. Then complete the fast until the sunset. And do not have relations with them as long as you are staying for worship in the mosques.”

However, it does not invalidate his fast if he forgets that he is fasting, this is analogically deduced with eating and drinking.

"Isn't it true that a woman does not pray and does not fast on menstruating?"

Inserting Something into Open Body Cavities

Among the matters which invalidates fast is inserting something into open body cavities (the cavity starting after the halqum (throat- around the area of Adam’s apple) all through the intestines and stomach) through open cavities which are the mouth, ears, genitals and anus of both man and woman. If it reaches the inner part of the cavity then his fast is invalidated. The same if a person puts or inserts a medicine inside his ears, then his fast is invalidated. However, if a person uses eye drops or eye medication inside of the eyes, then this does not invalidate his fast because the eyes are not included as open body cavities. (See al-Muktamad fi al-Fiqh al-Syafie, 2/181)

Dar al-Ifta Jordan issued a fatwa saying: “Eye medication does not invalidate fast even if it can be tasted in a person’s throat. The reason is the eye is not included as an open body cavity which channels something into the body cavity.”

Likewise, it is stated in Dar al-Ifta al-Misriyyah on their official social website answering the issue of using or placing eye medication. According to the opinion of Imam al-Syafi’e, inserting medication in the eye even if it reaches the throat does not invalidate fast.

Coming back to the above-presented question, based on the above evidences and arguments, we would like to conclude that using or placing eye medication inside the eyes does not invalidate fast. The reason is the eye is not categorized as an open body cavity. Even if the traces of the medication can be tasted in the throat it does not invalidate fast.

Furthermore, if something is accidentally inserted or entered into open body cavities such as the mouth, ears, genitals and anus, it does not invalidate the fast as stated in a hadith narrated by Abu Hurairah RA, where the Prophet PBUH said: