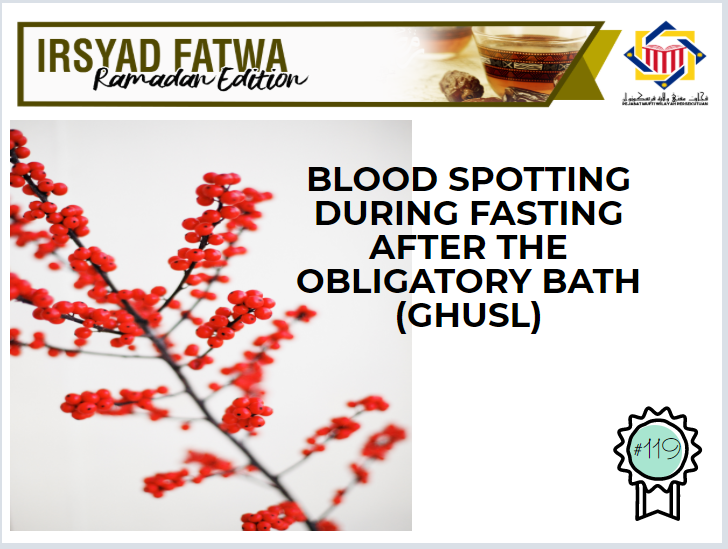 Assalamualaikum w.bt SS Dato’ Seri, my period is over, so I took the obligatory bath (ghusl), and then I prayed and fast, all of a sudden around 5 o’clock, I realize that there is a spotting of blood. Is my fast valid?

One of the conditions of validity of one’s fasting is free from the discharge of haidh and nifas. It is mentioned in the book of al-Fiqh al-Manhaji (2/81): “The conditions for one’s fasting to be valid are:…. 3) Nothing is hindering (that would invalidate) him/her from fasting. Constant fainting and insanity for a whole day as well as the discharge of haidh and nifas blood.”

Syeikh Sa’id Ba I’syn speak on this condition in his book Busyra al-Karim (page 554): “If a person renounces Islam, or having discharge of haidh and nifas, or becoming insane even if it is for one lahzah (split second).. therefore, his fast is invalidated just like the (ruling of) prayer itself.”

Blood discharged from women’s womb is haidh although it is discharged after she took the obligatory bath (ghusl). The blood is not considered as fasad (false blood) or non-menstrual vaginal bleeding (istihadhah) because the discharge is still in the period of 15 days of maximum bleeding for menstruation. Meanwhile, the period of non-bleeding (bleeding) stops, even if it is more than one day, is considered as fatrah naqa’ which still in the menstruation phase, when it comes in between two periods of bleeding as long as it still is in the period of 15 days. We already discussed the issue of fatrah naqa’ in the article of Al-Kafi #690: Melewatkan Mandi Wajib Kerana Menunggu Darah Haid Habis Keluar.[1]

Based on the facts and explanations stated above, it is clear that menstruation or the haidh duration has not yet ended. The spotting of blood which takes place on 5 o’clock is bleeding after fatrah naqo’, as long as the bleeding occurs at least for a day and a night (the minimum period of blood considered as haidh). Therefore, fasting on that particular day is considered as invalid and should be replaced later on. Wallahua’lam.