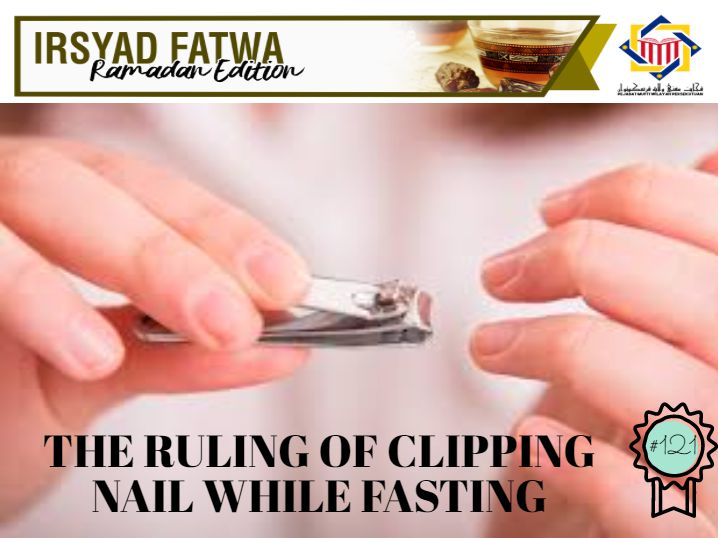 Assalamu‘alaikum SS Dato’ Mufti. What is the ruling of clipping nails while fasting?

Before we answer the above question, clipping nails is natural for humans based on a hadith from Abu Hurairah RA, where the Prophet PBUH said:

“Five things are of the inborn characteristics of man: circumcision, shaving the pubes, plucking out hair under the armpit, paring the nails and clipping the moustaches.”

The above matters are matters which invalidate fasting if done on purpose (except insanity). While if it is done unintentionally, forgetfulness or forced, then it does not invalidate it. (See Fiqh al-Manhaji, 1/241-245)

After reviewing the matters which invalidate fasting, the we found that clipping nails is not included in the matters that invalidate fasting. Possibly, the person who ask the question is confused with the matters that are prohibited in the state of ihram. The reason is, clipping nails is prohibited when someone is in the state of ihram, and whoever commits this prohibition will have to pay a fine (also known as dam).

As for the ruling of biting nails while fasting, it is permissible as long as he does not swallow the nail. This is stated by Dar al-Ifta’ al-Misriyyah.

As a conclusion, clipping nails does not invalidate fasting, whether it is sunnah fasting or obligatory fasting. Lastly, may Allah SWT accept all our good deeds in this blessed month of Ramadhan and reward us with the great rewards promised to His slaves who loves worshipping Him. Amin.