IRSYAD AL-FATWA RAMADHAN EDITION SERIES 126: IS THE GATE OF AL-RAYYAN SPECIALIZED ONLY FOR THE UMMAH OF OUR PROPHET MUHAMMAD PBUH? 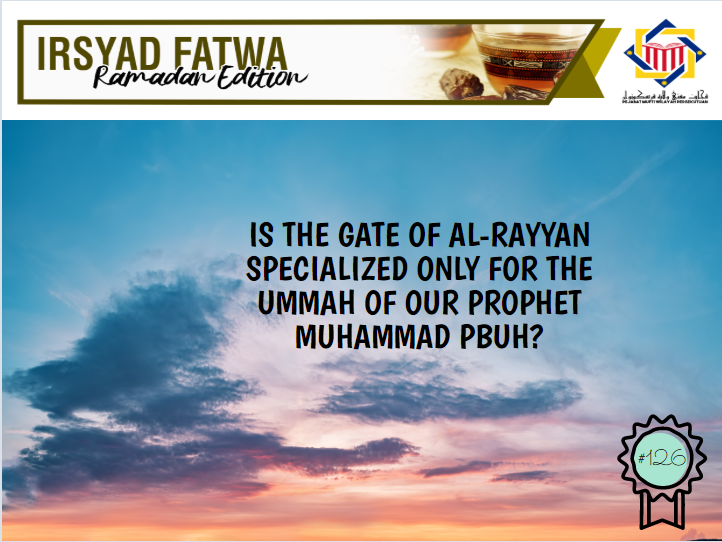 One of the blessings of Allah SWT upon His servants is every person will enter paradise through the gate of his deeds. One of the gates is the gate of al-Rayyan which specially meant for those who fast a lot. This is in accordance with a hadeeth narrated by Abu Hurairah RA. The Prophet PBUH said:

Imam al-Nawawi upon commenting on this hadeeth stated that every person will enter from the gates of his deeds due to his consistent acts of worship like prayer, fasting and others. (Refer Al-Minhaj Syarh Sohih Muslim, 6/100)

This means, if a true worshipper of Allah (mu’min) does the act of worship consistently, he will be welcomed to enter the Paradise from any specific gates meant for him. In fact, Al-Hafiz Ibnu Hajar said that apart of the mentioned gates, there are other gates as well like the gates of Hajj, dhikr, knowledge, and the right side is the gate of tawakkal which meant for those who enter Paradise without being judged. (Refer Fath AL-Bari Syarh Sohih Al-Bukhari, 7/37)

Referring to the above question, the hadeeth mentioned is taken by its general meaning. It means that the gate of Al-Rayyan will also be entered by the ummah of other prophets as well. Specialized unseen things (ghaibiyyat) require evidence or excerpts of the Quran and Sunnah. If there is none, then the mentioned hadeeth will be applied based on its general meaning. A legal maxim mentions:

“If the excerpt of syara’ uses general words and there is no other evidence found specifying the issue, then it sticks compulsorily on the general meaning”

This means, every nation (ummah) before the Prophet Muhammad PBUH is eligible to enter the gate of Al-Rayyan as long as they believe in Allah SWT. However, the earliest nation to enter the Paradise is the nation of Muhammad PBUH. This is generally based on the hadeeth narrated by Abu Hurairah RA. The Prophet PBUH said:

May Allah grant the understanding of this religion to us all. Wallahua’lam.