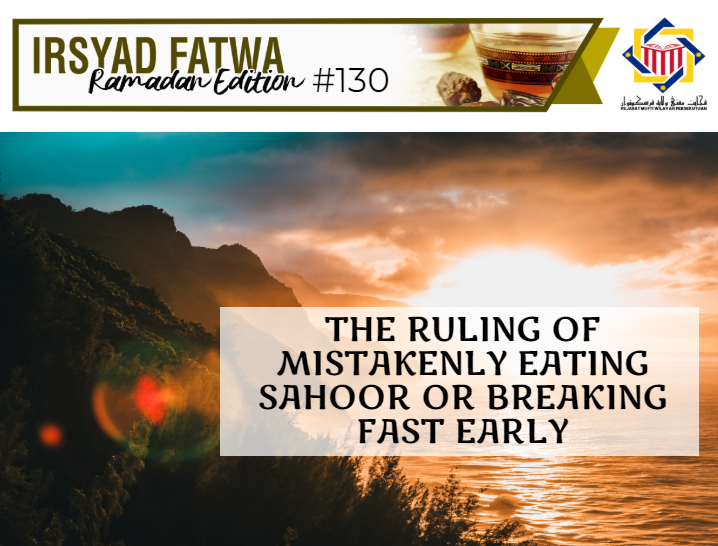 I want to ask why is it if a person mistakenly eats for sahoor after the adhan for Subuh or breaks his fast early before its time then his fast is invalid and he has to replace (qadha’) his fast? While for a person who eats and drinks because he forgets that he is fasting, his fast is valid and he does not have to replace his fast?

Hope for an explanation from you.

Allah SWT sanctions the worship of fast for the ummah of the Prophet Muhammad PBUH just as it has been sanctioned for the previous ummah. Allah SWT states:

“O you who have believed, decreed upon you is fasting as it was decreed upon those before you that you may become righteous,”

Fast lexically means to abstain oneself. While in syarak, the term means abstaining oneself from matters which invalidate the fast through certain means from the time the sun rises until the sun sets. (Refer Syarh al-Yaqut al-Nafis: 294)

Apart from the obligation of fasting, Allah SWT also gives a facilitation for certain groups of people to break their fast. Allah SWT states in the Quran:

“And whoever is ill or on a journey - then an equal number of other days.”

Ibn Kathir commented on this verse saying that if a person is ill or travelling then he can break his fast or choose not to fast. The reason is if he continues to fast, it would burden him and cause him hardship, then he should break his fast then qadha’(replace) it on another day. (Refer Tafsir Ibn Kathir, 2:184)

Likewise, Allah SWT gives the facilitation to those who did something that invalidate his fast when he forgets or it is accidental, then his fast is not invalidated. This is according to a hadith narrated by Abu Hurairah RA, where the Prophet PBUH said:

It is also narrated by Ibn Abbas, the Prophet PBUH:

“Allah has forgiven for me my nation their mistakes and forgetfulness, and what they are forced to do.”

Thus, whoever did something that invalidates his fast when he forgets, it is accidental and if he is forced, then his fast is not invalidated and he should complete his fast until the time for breaking fast.

However, it is different for the situation of a person who is uncertain about the time of breaking fast and sahoor following only his ijtihad. In this situation, the scholars divided the ruling for this situation into two:

However, if afterwards he found out that he makes a mistake of eating and drinking after the Subuh adhan or mistakenly breaks his fast before the Maghrib time in a situation when he is certain that he had made a mistake. Then, his fast in invalidated and he should qadha’ (replace) it on another day. This is based on the maxim:

“Assumptions are no longer applicable when the mistake is clear.” (Refer Ithaf al-Anam bi Ahkam al-Siyam: 106-107)

Furthermore, a person who made a mistake of eating sahoor after Subuh, he should abstain from eating and drinking and everything that invalidates the fast until the time to break the fast. (Refer Sullam al-Raja Syarh Safinat al-Naja: 59)

According to the above discussion, we concluded that the fast of a person who has doubts of when the time to break his fast is, is invalid and it is haram for him to eat except after he is sure that the time has started.

Whereas, the fast is not invalid and it is permissible for him to continue eating and drinking when he is uncertain that the time of sahoor has ended. However, if it became clear and certain that he had made a mistake by eating after the sahoor time has ended, then his fast is invalidated and he should replace his fast on another day. Both situations are in accordance with the Islamic legal maxim:

“The original ruling of something persists according to what precedes it.”

May Allah SWT give us sahih understanding in His religion and grant us taufiq to always perform good deeds. Amin.