IRSYAD AL-FATWA SERIES RAMADHAN EDITION 137: IT’S NOT WRONG TO BREAK ONE’S FAST AT A FRIEND’S HOUSE WHO IS A NON-MUSLIM, BUT… 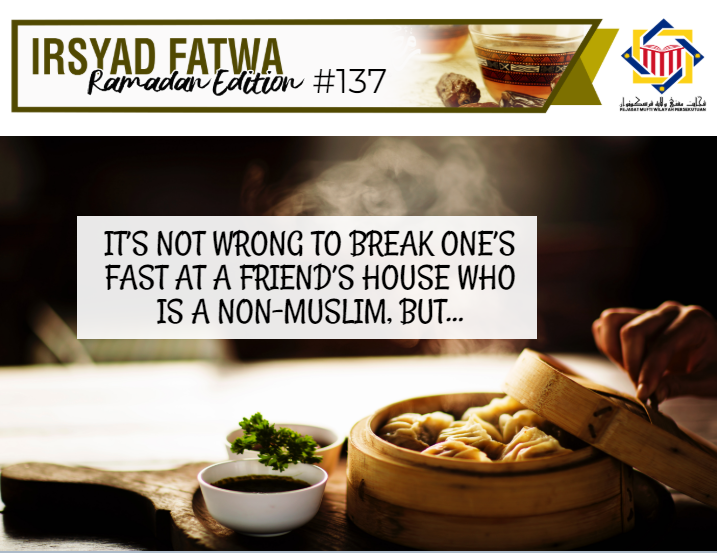 Assalamualaikum ustaz. My friend who is a non-Muslim invited me to break my fast at his house. Is it permissible for me to go because I don’t want to offend him or hurt his feelings? Hope for an explanation.

We have previously answered the issue of praying in churches or monasteries in the article Irsyad Al-Fatwa Series 238: The Ruling of Praying in Churches or Monasteries. The conclusion is that it is makruh (undesirable) to pray in churches but it is not haram. In our opinion, it is permissible to break a person’s fast in a non-Muslim’s house according to this analogical deduction and there are no syarak evidences which prohibit this matter. Thus, it falls back to the Islamic legal maxim:

“The original ruling of something is its permissibility until there is evidence that prohibits it.”

From the above explanation, we can understand that:

According to the above facts and discussions, we are inclined towards the opinion that states that it is permissible to answer the invite of a non-Muslim to break one’s fast at their house and it is even sunnah. This is so on the condition that the food and drink served is halal and safe from anything that is haram such as swine, alcoholic beverages and other najis. Our advice, use this opportunity the best way by showcasing good character and conduct of a Muslim, convey the message of Islam and at the same time sharing the blessings Allah SWT has granted us all in the form of food and drinks.