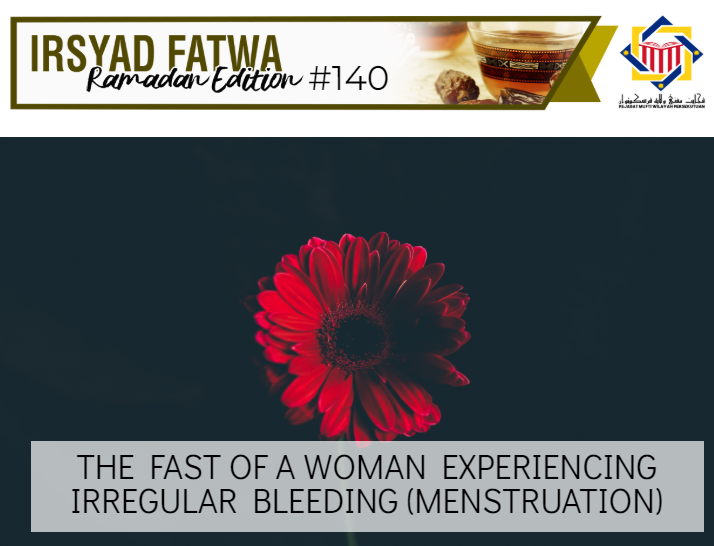 I need some help. I was experiencing some vaginal bleeding and observed some blood spots for two days which is on the 4th and 5th May (2019), which is a day before Ramadhan and the first day of Ramadhan. The next day, I was no longer bleeding up to the 17th May. On the 18th there is some bleeding after Asar. I’m not sure whether the bleeding will continue or not.

My question is, on the 18th May (where I experienced bleeding), should I consider it as the 15th day of my menstruation or the first day of my next menstruation cycle? How about the 12 days that I have fasted, are they valid?

The basis that we should first understand in order to answer this question is the meaning or definition of menstruation (haidh). The author of the book al-Fiqh al-Manhaji defined the term haidh as:

“Lexically, haidh means flowing. While the meaning of haidh according to syara’ is natural and normal blood which is excreted from the vagina of a healthy woman who has reached maturity in certain time.”

According to the above definition, it can be understood that haidh blood is blood which flows out during the normal time (usual time she would experience her menstruation) of a healthy woman. Thus, abnormal bleeding and bleeding caused by a disease is not haidh (menstruation) and considered as fasad blood or istihadhah. In al-Fiqh al-Manhaji, istihadhah is defined as:

“Istihadhah is diseased blood which flows through the vein at the end of the uterus which is known as al-‘Azil (العاذل).”

The important criteria that should be taken into consideration from this definition is blood which flows at certain times. Among the times are the minimum, maximum and usual times of menstruation. In madhhab al-Syafie, the minimum duration for menstruation is a whole day and night. This is the fatwa issued by Imam al-Syafie in al-Umm and held by the ashab. Refer al-Majmu’ Syarh al-Muhazzab (2/376)

The meaning of a whole day and night is 24 hours as stated by Syeikh al-Islam Zakariyyah al-Ansari in his book:

“Which means the duration of day and night which is for 24 hours.”

The duration for the bleeding of 24 hours may be continuous or irregular (with gaps). If a woman experienced irregular menstruation, for 4 days, then it adds up to 24 hours, then on the fourth day she will be considered as has been menstruating for a day.

Afterwards, if the bleeding stops then starts again after a few days, the duration when the bleeding stops, or also stated as the naqa’ duration, it is still considered as the menstruation duration, according to the final opinion. While according to the second opinion in the madhhab, throughout the naqa’ duration a woman is considered as pure and her prayer and fast performed during this time is accepted and valid.

The condition for the irregular bleeding is that it must not exceed 15 days for it to be considered as menstruation. If it exceeds 15 days, then the entirety of it is considered as fasid or diseased blood and not menstruation blood.

Thus, if after 15 days have passed but the bleeding does not complete the 24 hours, whether it is continuous or irregular, then if she experiences bleeding after the 15 days, then it should be considered as a start of menstruation.

The following we state all the conditions for the naqa’ duration to be considered as menstruation:

According to the above facts and explanations, the 12 days of fasting by the questioner is valid. The reason is a few spots of blood observed on the 4th and 5th of May do not complete the duration of 24 hours in 15 days. While bleeding on the 18th May is considered as the starting day where the above methodology is applicable to determine whether it is menstruation or fasid blood. The reason is, when it is certain that the first 15 days of blood spots is not menstruation blood, then the minimum 15 days of pure is not applicable here.