IRSYAD AL-FATWA SERIES RAMADHAN EDITION 142: THE QURAN IS REVEALED ALL AT ONCE OR IN STAGES? 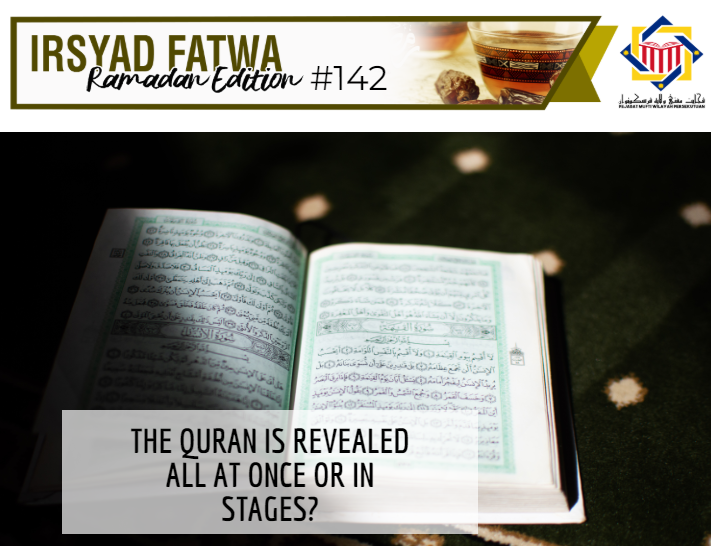 Assalamualaikum, I’m confused, why do some people say the Quran is revealed all at once while others state that it is revealed in stages?

In answering this question related to nuzul al-Quran, we should first understand the story of nuzul al-Quran that we have discussed in our previous article. We stated:

The Meaning of Nuzul al-Quran

The literal meaning of nuzul means staying in a certain place or descending from a high place. Its verb form nazala (نزل) means ‘he descended’ or ‘he becomes a visitor’. Actually, the usage of the terminology nuzul al-Quran is through majaz or (symbolic) which means the announcement of al-Quran. The purpose is to show the great and high distinction and status of the Quran.

The statement that the Quran is sent down in stages or all at once in truth are not contradictions to each other. However, both are true, for the Quran is revealed in stages and all at once. This can be understood when we analyse the following discussion on this matter.

“But this is an honored Qur'an. [Inscribed] in a Preserved Slate (Luh Mahfuz).”

In commenting the above verses, Imam al-Qurtubi and al-Tabari said Luh Mahfuz is by Allah SWT side and protected, where the shaytan cannot reach it. See al-Jami’ li Ahkam al-Quran (10/196), Jami’ al-Bayan fi Takwil al-Quran (12/531).

“The month of Ramadhan [is that] in which was revealed the Qur'an,”

Imam al-Qurtubi said the scholars agreed and there is no khilaf on the meaning of the verse which is the Quran is sent down all at once from Luh Mahfuz to the skies of the earth on the night of Qadar. See al-Jami’ li Ahkam al-Quran (2/297).

“The Trustworthy Spirit has brought it down. Upon your heart, [O Muhammad] - that you may be of the warners - In a clear Arabic language.”

According to the above discussion, we would like to state that the Quran is revealed all at once in the first two stages where it is sent down to the Luh Mahfuz and then to the Bait al-Izzah or the skies of the earth. This is what is meant in verses of the Quran where Allah SWT stated the Quran is sent down all at once.

Hopefully, we will all be blessed with guidance to understand and practise everything that has been revealed in the Quran. Amin.