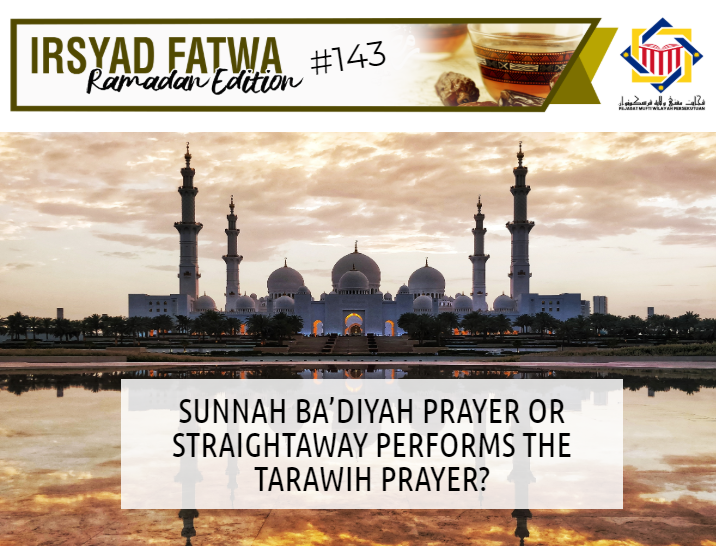 Assalamualaikum ustaz. I once prayed in a surau where right after the Isya’ prayer the imam straight away performs the tarawih prayer without giving the chance for the makmum to perform sunnah ba’diyah prayer. Is this the prioritized way?

The tarawih prayer is an encouraged worship for Muslims to enliven the nights in the month of Ramadhan. This is in accordance with a general hadith:

“Whoever stood for the prayers in the night of Ramadhan out of sincere Faith and hoping for a reward from Allah, then all his previous sins will be forgiven."

In short, tarawih prayer is among the encouraged worships exclusive for the month of Ramadhan other than other worships such as reciting the Quran, dhikr, donating to charities and others.

This is according to a hadith narrated by Ummul Mukminin Saidatina Aisyah RA, where the Prophet PBUH said:

“Then help me to achieve this for you by devoting yourself often to prostration.”

Coming back to the question presented, the best way is to first perform the ba’diyah Isya’ prayer before performing the tarawih prayer. The reason is the two rakaat following the fardhu prayer is a sunnah prayer that the Prophet PBUH never misses.

Imam al-Nawawi said that the ashab have reached a consensus that sunnah rawatib prayer is prioritized for it is a prayer that is always performed unlike the tarawih prayer. This is the sahih opinion. (Refer Al-Majmu’ Syarh Al-Muhazzab, 4/5)

Moreover, jurists from other madhhabs such as madhhab Hanbali stated that the time for tarawih prayer is after the sunnah prayer after the Isya’ prayer. Al-Buhuti said:

May Allah SWT give us all the correct understanding in religion and grant us the strength to always perform the sunnah prayers. Wallahua’lam.