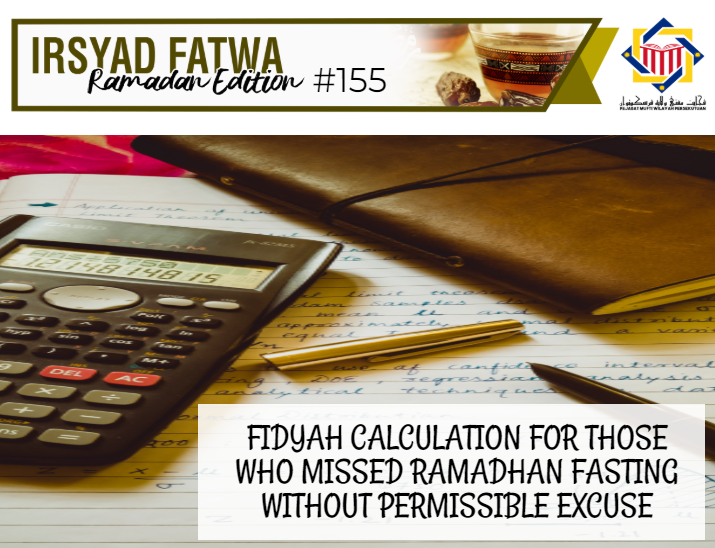 How much is the fidyah that I and my siblings (4 people) have to pay because we had left past Ramadhan fasting without any permissible excuse? We are not sure the exact number of days we had not fasted. Hope for an explanation. Thank you.

The Obligation of Fasting

Fasting in the month of Ramadhan is one of the pillars of Islam which is obligated upon every Muslim. This is clear as stated in a hadith narrated by Ibn Umar RA where the Prophet PBUH said:

(The superstructure of) al-Islam is raised on five (pillars), testifying (the fact) that there is no god but Allah, that Muhammad is His bondsman and messenger, and the establishment of prayer, payment of Zakat, Pilgrimage to the House (Ka'ba) and the fast of Ramadan.

However, Islam still gives the chance for its ummah of whom had gone astray by leaving the fasting intentionally and have the conscience to repent to Allah SWT on the condition that he regrets his actions, immediately stop and determined to never commit it again.

For further explanation on the ruling for leaving Ramadhan fasting intentionally, you may refer to our article in Irsyad al-Fatwa Ramadhan Edition Series 133: The Ruling of Leaving Ramadhan Fasting Without Any Permissible Excuse

Coming back to the above question, whoever leaves Ramadhan fasting without any permissible excuse, he has committed a sin and it is wajib for him to qadha’ (replace) it as the Prophet PBUH said:

Whoever makes himself vomit has to make up for the fast

This is because those who leave Ramadhan fasting with excuses like sickness and travel also have to replace it again, even more so for (min bab al-Awla) or those who intentionally break their fast without any excuse. Also, they should abstain from eating and drinking (after intentionally breaking fast) until it is the time to break the fast (Maghrib) and it is wajib for them to qadha’ (replace) it before reaching the next Ramadhan. [See: al-Mu’tamad fi al-Fiqh al-Syafie (2/200)]

If he neglects and does not replace it until the next Ramadhan comes, he is sinful and it is wajib for him to pay fidyah, which is providing staple food to the needy for one mudd for each missed day and the fidyah will be multiplied according to the number of years it is not replaced.

This is in accordance with an athar from Ibn Abbas, Ibn Umar and Abu Hurairah RA that they said:

“Whoever has some fasts to be replaced, but did not do so until he reaches the next Ramadhan, he should give food (fidyah) due to the previous (last Ramadhan)” [Dr Muhammad al-Zuhayli said that these athar are narrated by al-Daruqutni with a sahih sanad]

One mudd is equivalent to one raup or (1 1/3) Baghdad bushel, which is approximately 600 grams. For people who are continuously sick until he reaches the next Ramadhan, it is wajib for him to only qadha’ without paying fidyah. Those who pass away before qadha’ their fasting, it is not sinful for them and their fasts should not be replaced by others because it is not due to negligence. While for people who did not qadha’ his fasting while he is able to do so when he is alive, it is Sunnah for the wali to fast on his behalf, replacing his fasts. The meaning of wali in this context is family relatives of the deceased.

"Whoever dies while he still has some fasts to make up (of the days of Ramadan), then his heir (any of them) should fast on his behalf.”

Next, a hadith narrated by Ibn Abbas RA, where he said:

A man came to the Messenger of Allah (ﷺ) and said: Messenger of Allah, my mother has died (in a state) that she had to observe fasts of a month (of Ramadan). Should I complete (them) on her behalf? thereupon he (the Holy Prophet) said: Would you not pay the debt if your mother had died (without paying it)? He said: Yes. He (the Holy Prophet) said: The debt of Allah deserves more that it should he paid.

The Latest Fidyah Calculation According to MAIWP [1]

The Federal Territory Islamic Religious Council (MAIWP) has agreed that the fidyah rate for one day of missed fast is 1 mudd of rice which can be made into zakat fitrah (1//4 of Baghdad bushel).

In monetary form, it is according to the price set by the Federal Territory Islamic Religious Council (MAIWP) until the year 2019; 1 mudd of rice is equivalent to 600 grams

If one left his fasting for 3 days and replaced them after 3 times of Ramadhan, so his fidyah is:

The Procedure of Paying Fidyah at MAIWP [2]

The method of calculation and the amount of fidyah to be paid may be done at General Resources Unit, Baitulmal Division, while payment can be done either by cash or through cheque/postage registered under the name MAJLIS AGAMA ISLAM WILAYAH PERSEKUTUAN

The fidyah price is different according to the price set by the authority in certain areas, while its calculation is based on the price of rice (local staple food).

Based on the question asked above, after considering the opinions of Shafi’e scholars, we conclude as the following points:

We also advise to always make du’a and never lose hope in asking for Allah SWT’s forgiveness. Hopefully, Allah SWT will accept our tawbah and make us be from among the better Muslims.

We end this with the saying of Allah SWT:

Allah does not charge a soul except [with that within] its capacity. It will have [the consequence of] what [good] it has gained, and it will bear [the consequence of] what [evil] it has earned. "Our Lord, do not impose blame upon us if we have forgotten or erred. Our Lord, and lay not upon us a burden like that which You laid upon those before us. Our Lord, and burden us not with that which we have no ability to bear. And pardon us; and forgive us; and have mercy upon us.