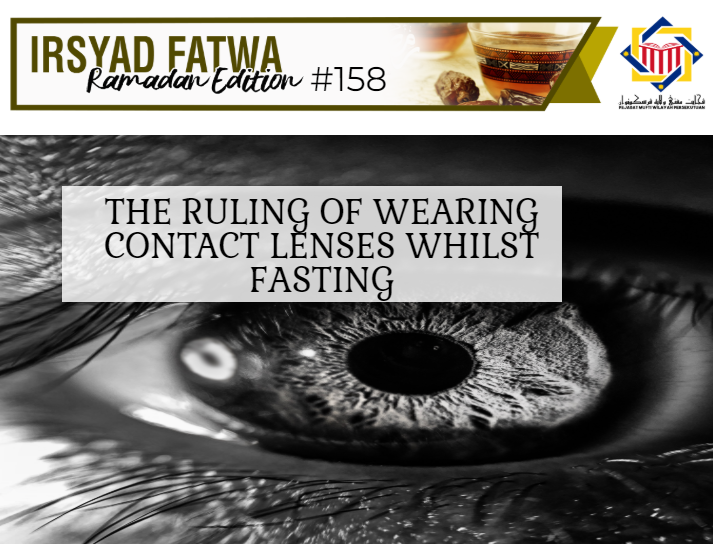 Assalamualaikum. What is the ruling of wearing contact lenses while fasting? Is it considered as inserting something inside an open body cavity that would invalidate a person’s fast?

In a narration, 'Ubaid Allah b. Abu Bakr b. Anas reported on the authority of Anas b. Malik:

“He used to apply collyrium when he was fasting.”

Based on the above hadith, according to the opinion of madhhab Syafie, scholars ruled that for a fasting person, it is permissible for him to apply collyrium and it does not invalidate his fast for the eyes are not included as open body cavity.

The reason is among the matters which invalidate fast is inserting anything into an open body cavity (cavity from Adam’s apple all through the intestines and stomach) through an open cavity (manfaz maftuh) such as the mouth, ears, private parts (penis, vagina, anus) for both men and women. Regardless of whether or not the cavity functions as a processing organ for food and medicine. If something is inserted inside of it that it reaches these cavities, then his fast is invalidated. Whereas the eyes are not included as the stated open cavities. (See al-Muktamad fi al-Fiqh al-Syafie, 2/181)

Imam al-Nawawi said: “And it is permissible to wear collyrium according to the narration from Anas where he himself apply collyrium when he is fasting, thus, the fast is not invalid if something reaches through it (the eyes).” (Refer Al-Majmu' Syarh al-Muhadzzab, 6/361)

Imam Ibn Hajar al-Haitami said: “And a person should prevent himself from inserting something inside any open body cavity called as the stomach, for a person who does so is named a mumsik (a person who abstain himself), this is different from traces of something reaching it, for example, the taste (of food) and scents smelled, for example, smelling the scent of burnt agarwood (gaharu) the wafts is inhaled and entered the stomach, even if it is done intentionally does not invalidate the fast.” (Refer Tuhfah al-Muhtaj, 3/400-401)