IRSYAD AL-FATWA SERIES RAMADHAN EDITION 160: IS OUR FAST VALID IF WE ALSO INTEND TO BE HEALTHY BY FASTING? 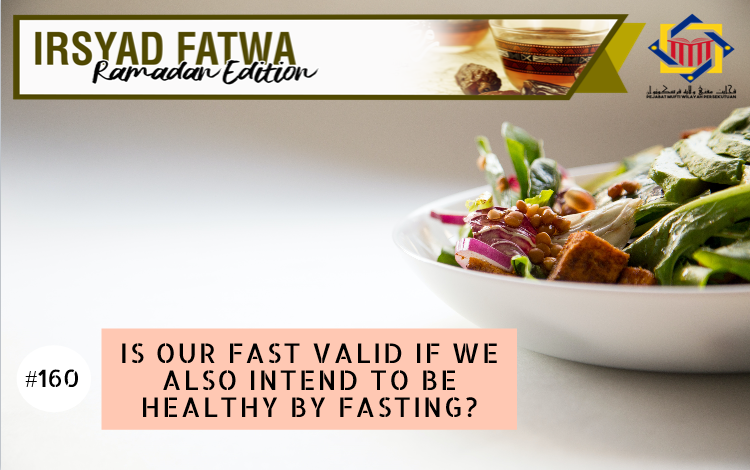 What is the ruling if I sincerely fast for Allah SWT, but at the same time intend to be healthy through my worship of fasting based on the hadith of the Prophet PBUH: “Fast, surely you will be healthy,” Jazakallah khair.

The worship of fasting is often related to the aspect of health. The reason is the act of fasting which involves abstaining oneself from eating and drinking starting from when the sun rises until it sets is a different routine for most Muslims in months other than Ramadhan.

Some of us argued that the worship of fasting has a positive effect on our health based on the hadith:

“Fast for you will be healthy,”

We have explained the status of this hadith in our previous article titled: IRSYAD AL-HADITH SERIES 272: THE STATUS OF THE HADITH FAST AND YOU WILL BE HEALTHY [1]. To conclude, the hadith is narrated by a group of the Companions, but it is not an authentic hadith from the Prophet PBUH.

However, this does not mean that the meaning of the matn or text of the hadith is also unauthentic. The reason is the knowledge on medicine and science have proven that fasting has great benefits on one’s health.

In this matter, then an issue arises: what is the ruling if a person sincerely performs a worship for the sake of Allah SWT but at the same time intends to attain worldly advantages and benefits; does this considered as riya’ (pretentious righteousness) and affect the validity of the worship?

According to Imam Jalaluddin al-Suyuti, this matter should be specified by scholars and in the case of fasting to attain a better health and a form of medical treatment, then the fast is valid and it does not affect the fasting although there is khilaf among scholars.

According to Imam Syihabuddin al-Qarafi, fasting with the intention to be healthy and as treatment for an illness does not affect the true maqasid (objective) of fasting itself.

Likewise, for the case of those who went to war sincerely for Allah SWT and at the same time intend to collect the spoils of war (ghanimah). It is not an offense for ghanimah came together with jihad itself; different from those who joined the battle to be known as a brave person or attain a high status by the side of the ruler, then it is considered as riya’ which is prohibited.

At the same time, he explained that although intending to attain worldly gains is not considered as a sin nor does it invalidate a worship, it should be reminded that it could decrease the rewards for the worship. A pure worship, unadulterated with worldly desires increases the rewards of the worship and vice versa. (Refer Anwar al-Buruq fi Anwa’ al-Furuq 3/22-23)

Syeikh Umar bin Sulaiman al-Asyqar when commented on the explanation of Imam al-Qarafi saying that mixed intentions in worship is not included under the category of riya’ as misunderstood by some scholars. (Refer Maqasid al-Mukallafin, pg. 454)

In short, we would like to state that the fast of a person who is sincerely fasting for Allah SWT at the same time also intending to get healthy is valid.

However, we would like to emphasize that the main purpose a person fast is as a sign of obedience of a slave towards Allah and to attain taqwa. As for other health benefits of fasting, it is a bonus and wisdom blessed by Allah SWT for His obedient slaves who perform it.

We should also increase our supplications to Allah SWT as stated in the Iftitah supplication we recite in every prayer asking that we are always sincere in our every deed:

Say, "Indeed, my prayer, my rites of sacrifice, my living and my dying are for Allah, Lord of the “worlds.”

May Allah SWT grant us the strength to perform the worship of fasting the best we could. Amin.