IRSYAD AL-FATWA RAMADHAN EDITION SERIES 161: KAFFARAH FOR THOSE WHO HAD INTERCOURSE WHILST FASTING, IGNORANT OF ITS PROHIBITION 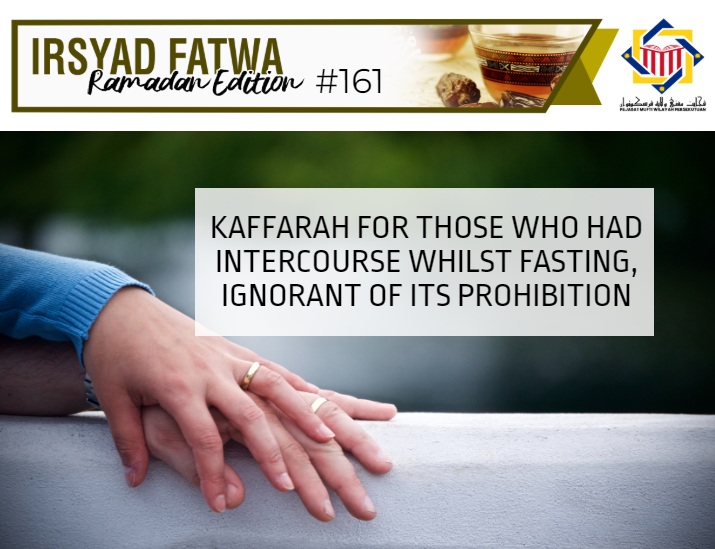 Assalamualaikum ustaz. I once had sexual intercourse with my husband while studying abroad and it was during Ramadhan. At the time we were both ignorant about kaffarah and matters pertaining this until a classmate of us informed us on the matter. My husband and I had intercourse in Ramadhan of 2017 for a day. From my understanding, there are 3 methods to pay kaffarah:

Freeing a slave, fasting for 2 months consecutively and providing food for the needy.

However, I have several questions:

Ramadhan fasting is an obligation upon each Muslim individual. And it is one of the pillars of Islam. Allah SWT command the Muslim ummah as well as past nations to perform the worship of fasting as stated in His saying:

O you who have believed, decreed upon you is fasting as it was decreed upon those before you that you may become righteous –

Kaffarah in fasting is only imposed on those who had intercourse on the daytime of Ramadhan.

Dr. Muhammad al-Zuhayli in his book state that kaffarah will not be imposed on a person in the following situations:

Among the conditions which obligate kaffarah is one being aware that he is fasting, knowing that the ruling of intentionally breaking fast is haram and not in rukhsah situations like travelling or being sick.

Besides that, whoever had intercourse while fasting in the month of Ramadhan because he does not remember or have no knowledge on its prohibition, or breaks his fast not in the month of Ramadhan, or just breaks his fast, but not having intercourse, or had intercourse while being a musafir which permits him to break his fast, then in these situations, it is not wajib for him to pay kaffarah and it is only wajib for him to replace his fast.

People Who Are Obligated to the Kaffarah

Kaffarah is only imposed on the husband and not upon the wife. This is as mentioned by Dr Muhammad al-Zuhayli in his book:

“It is wajib for a husband to fulfil the kaffarah. And it is not imposed on the wife even if she was fasting at that time. This is because the obligation to pay the kaffarah for jima’ (intercourse) is specialised only towards men and not women like in the payment of mahr. This is because the action of intercourse is said upon the man, so, kaffarah is wajib for him. Therefore, women are only obligated to replace the fast.” (See: al-Mu’tamad fi al-Fiqh al-Syafi’e, 2/204)

The same is stated in al-Fiqh al-Manhaji:

“Kaffarah due to breaking Ramadhan fasting is wajib upon the husband only and not upon the wife even if she is fasting at that time. This is because, the wrongdoing of a husband is heavier and worse.” (See: al-Fiqh al-Manhaji, 3/116)

And among the invalidators of fasting is having intercourse during the day. This is in accordance with the saying of Allah SWT:

It has been made permissible for you the night preceding fasting to go to your wives [for sexual relations].

Besides, pertaining to replacing the fasting, it is wajib to be done before reaching the next Ramadhan. And fidyah is imposed if he failed to perform it until he reaches the next Ramadhan. This is like what is stated by Dr Muhammad al-Zuhayli in his book: Having intercourse is an invalidator of fasting, like eating, whether there is ejaculation or not. (See: al-mu’tamad fi al-Fiqh al-Syafi’e, 2/184)

“And it is wajib upon him to qadha’ his Ramadhan fasting, however, if he failed to do so until he reaches the next Ramadhan on the next year, so, it is wajib for him to qadha’ and pay fidyah following the days he missed.” (See: al-mu’tamad fi al-Fiqh al-Syafi’e, 2/203)

Coming back to the above-presented question and according to the scholars’ opinions given, it can be concluded that:

Therefore, having intercourse while fasting in the month of Ramadhan is a great offense and is prohibited by syara’ as well as obligates repentance with a strong determination to not repeat it again. May Allah SWT forgive all our sins as well as give us understanding in practising His commandments.

Furthermore, you can also refer to the following articles:

AL-KAFI #759: IS KAFFARAH WAJIB FOR THOSE WHO HAD INTERCOURSE WHILE PERFORMING QADHA’ FASTING

AL-KAFI #1299: IS KAFFARAH IMPOSED ON THOSE WHO BREAK THEIR FASTS BY HAVING INTERCOURSE WHEN THE HUSBAND IS PERFORMING SHAWAL SUNNAH FASTING WHILE THE WIFE IS REPLACING HER FAST?

IRSYAD AL-FATWA SERIES RAMADHAN EDITION 147: A PERSON BREAKS HIS FAST BECAUSE HE WAS TRAVELLING THEN HAD INTERCOURSE AFTER HE ARRIVES HOME; IS HE FINED WITH KAFFARAH?