IRSYAD AL-FATWA RAMADHAN EDITION SERIES 162: THE RULING OF FASTING AND QADHA’ FOR PEOPLE WHO EMBRACE ISLAM DURING THE DAY IN RAMADHAN 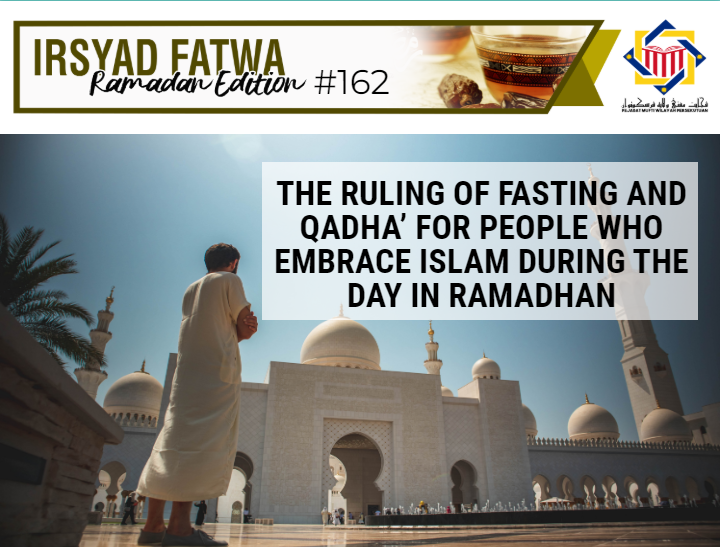 Assalamualaikum. I am a muallaf who reverted to Islam in the midst of Ramadhan last year. I would like to ask on fasting when I first embraced Islam which was on the daytime of Ramadhan and I was not fasting on that day or the days before when I was not yet a Muslim. Do I have to replace the fasting on that day and if I failed to replace it this year, do I have to pay fidyah as there are some who say that I do not have to replace the fasting on the day I became a Muslim? Hope for an explanation. Thank you.

The advantage given to those who embrace Islam is all of their sins and evildoings committed before they become a Muslim are forgiven. This is in accordance with a hadith narrated by Abu Said al-Khudri RA:

"If a person embraces Islam sincerely, then Allah shall forgive all his past sins,”

Ibn Hajar explains that one’s Islam becomes good by his intention and sincerity as well as when he embraces Islam with sincerity completely (his actions and his heart). (See Fath al-Bari, 1/99)

Coming back to the question asked, Islam is the main condition in determining the validation of one’s worship, the same goes for fasting which will become valid when one is a Muslim. It is not wajib and invalid if the non-Muslims do so.

The Ruling of Replacing Fast When One Embraces Islam

In discussing this issue, if one embraces Islam on the daytime of Ramadhan it is not wajib for him to replace the fasting of that day and the days before. This is because Allah SWT has forgiven all of his past sins committed before.

Say to those who have disbelieved [that] if they cease, what has previously occurred will be forgiven for them. But if they return [to hostility] - then the precedent of the former [rebellious] peoples has already taken place.

Imam al-Nawawi said, while for those pure disbelievers, they are not commanded to fast because their fasts will be invalid. However, if they embrace Islam, it is not wajib for them to replace what are in the past. This is like the saying of Allah SWT in surah al-Anfal, verse 38. And this is because, if they are obligated to replace all of the past deeds, this will drive them away from Islam. (See al-Majmu’ Syarh al-Muhazzab, 6/252)

The same for the opinion of Khatib al-Sharbini which he states that according to the consensus (ijma’) of scholars, it is not wajib for the non-Muslims to replace their fasting so that it will not drive them away from Islam. (See Mughni al-Muhtaj, 2,170)

Besides, Dr Wahbah al-Zuhayli said, and if it is obligated upon them to replace their past fasts while they were disbelievers, this will drive them away from Islam. (See al-Fiqh al-Islami wa Adillatuhu, 3/1664)

Whoever embraces Islam on the daytime of Ramadhan, the scholars have differing opinions on this either to replace the fast or if it is an obligation upon him to continue fasting on that day.

Imam al-Nawawi said, according to the opinion of the writer (al-Muhaddhab) and the Iraq scholars, they are of the opinion that a person who loses his sanity, when becoming sane, a non-Muslim when he embraces Islam and a child who reaches puberty on the daytime of Ramadhan, and they are not fasting, it is Sunnah for them to observe themselves from committing actions which will invalidate fasting on that day.

Imam al-Nawawi also said, and on the matter of whether it is wajib for him to replace it, there are two opinions; the sahih opinion in the madhhab is in accordance with what is said by al-Buwaiti and Harmalah, which states he is not obligated to replace it and according to the opinion of Ibn Suraij, it is wajib for him to replace it. The author (of al-Muhadhhab) states the evidences of all opinions if a child reaches puberty and he is fasting, then he should complete his fasting as stated. This is the asoh (most sahih opinion among the scholars of Shafi’e school) with ittifaq (agreement) of the ashab of al-Shafi’e. Pertaining to this matter, it is unnecessary for him to replace his fast.

Imam Khatib al-Sharbini states, when someone embraces Islam on the daytime of Ramadhan then it is unnecessary for him to replace the fast of that day and this is the asoh opinion. This is because there is not enough time to complete his fasting and to complete it on that day is impossible. This is the same as when a person has the chance to enter a time of prayer in the period of one rakaat, then he becomes insane. For the second opinion, it is wajib for him to replace his fasting of that day because he already enters part of the time of obligation and it is impossible for him to complete the fasting of that day. So, he should replace it on other days. According to the asoh opinion, it is unnecessary for him to observe himself from invalidators of fasting for the rest of the day. (See Mughni al-Muhtaj, 2/170)

Dr Muhammad al-Zuhayli in his book discusses on this matter stating if a person embraces Islam on the daytime of Ramadhan and he is not fasting, then it is Sunnah for him to observe himself from invalidators of fasting as a sign of respect towards the month which is the month of Ramadhan. It is not an obligation for him to fast and it is not wajib for him to replace the fast of that day. This is the same as a person who has the chance to enter a time of prayer on the period of one rakaat then he becomes insane. So, it is not wajib for him to perform the salah and also not wajb to replace it. (See al-Mu’tamad fi al-Fiqh al-Syafi’e, 2/169)

Based on the question and the opinions of the jurists, we can conclude here that one who embraces Islam on the daytime of Ramadhan are as the following:

Hence, by this belief, it is enough for Allah SWT to forgive the obligations he left before embracing Islam. Therefore, how lucky are those who are given guidance and hidayah from Allah SWT to accept Islam. This is in accordance with the saying of Allah SWT:

And We will have removed whatever is within their breasts of resentment, [while] flowing beneath them are rivers. And they will say, "Praise to Allah, who has guided us to this; and we would never have been guided if Allah had not guided us.”

May Allah SWT give us correct understanding in His religion as well as taufiq and hidayah to practice His shari’a accordingly.