IRSYAD FATWA RAMADHAN EDITION SERIES 163: WHEN SHOULD PARENTS START TO TRAIN THEIR CHILDREN TO FAST? 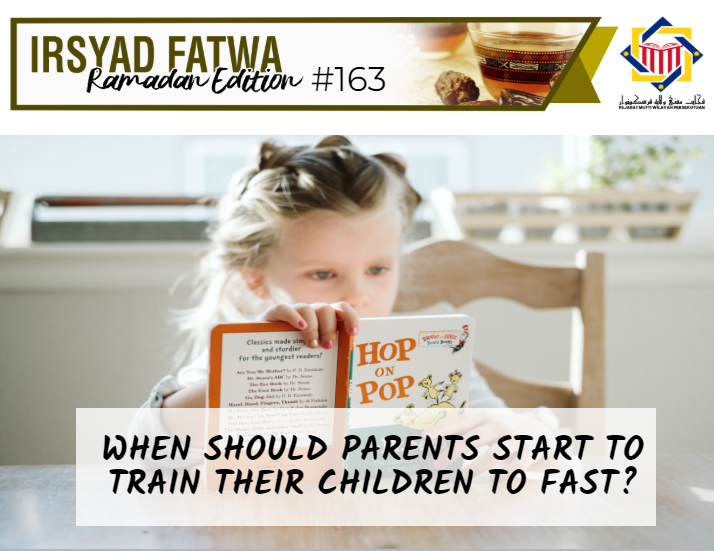 What is the appropriate age to train or ask a child to practice fasting?

Scholars have decided that children who have not reached their puberty yet are not obligated to fast according to the hadith which states that there is no taklif and responsibility upon children until they reached puberty. Sayyidina Ali bin Abi Talib RA narrated that the Prophet PBUH said:

There are three (people) whose actions are not recorded: A boy till he reaches puberty, a sleeper till he awakes, a lunatic till he is restored to reason.

However, if a mumayyiz child fasts, then his fasting is valid. Imam al-Qalyubi said:

(And one of the valid conditions of fasting) is the ability to reason, in other words, tamyiz; able to differentiate between good and bad. So, the fasting of a mumayyiz child is validated. (Refer Hasyiyata al-Qalyubi wa ‘Umairah 2/76)

A question arises, what is the appropriate age of a child to be trained or taught to fast? According to Imam Zainuddin Ahmad al-Malibari and Sheikh Dr Muhammad Hassan Hito, parents or guardians should instruct their children to fast starting from seven years old, and educate them with ‘light hit’ which is not painful when they reach ten if they refuse to do so. This is analogically deduced (qiyas) with the hadith which mentions the commandment on how and when it is to educate children to pray:

Command a boy to pray when he reaches the age of seven years. When he becomes ten years old, then beat him for prayer.

However, parents or guardians should always make sure that the fasting may not harm the children and analyse their capabilities on how long they should go on fasting.

Consequently, we state here that parents or guardians should teach or command their children to fast as early as seven years old and educate them with a light hit when they reach ten if they refuse to do so. This ruling is analogically deduced with the hadith which command to educate the children to pray as stated above.