IRSYAD FATWA RAMADHAN EDITION SERIES 167: THE RULING OF DIVIDING A LENGTHY VERSE OF AL-QURAN INTO PARTS IN DIFFERENT RAKAATS OF TARAWIH PRAYER 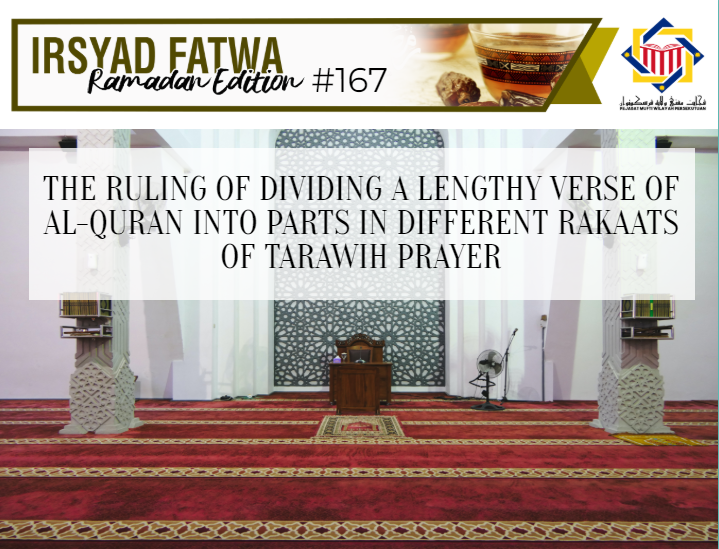 I have a question. When performing tarawih prayer, the imam read a lengthy verse from al-Quran which is verse 282 of Surah al-Baqarah. However, he divided the verse into four rakaats of tarawih prayer. My question is, is it permissible to do so and will he get the Sunnah reward even if he does not read the verse completely? Hope for an explanation pertaining to this matter.

Reading al-Quran is a form of ibadah. In every verse and phrase, there are rewards for those who read them. It is narrated by Abdullah bin Mas’ud RA that the Prophet PBUH said:

Likewise, reading other surah and verses of al-Quran after the recitation of al-Fatihah is a sunnah act which completes the reward of prayer. This is in accordance with a hadith narrated Abu Qatadah that:

"The Prophet (ﷺ) used to recite Al-Fatiha along with another Sura in the first two rak`at of the Zuhr and the `Asr prayers and at times a verse or so was audible to us."

Coming back to the question asked, generally, there is no prohibition for one to divide one surah or even one verse into some parts to be recited in several rakaats in his prayer as long as the meaning is still intact. Especially if the verse is too long like the verse on debt in surah al-Baqarah which covers one whole page.

This is supported by the statement of Ahmad al-Nafrawi al-Maliki that:

“After reciting surah al-Fatihah, recite after it… some of (the verse of) al-Quran even with a short verse like (ذَوَاتَا أَفْنَانٍ) or (مُدْهَامَّتَانِ) or some of the long verse like the verse on debt (which is verse 282 of Surah al-Baqarah). And it is better (to recite) the complete surah (one whole surah).” (See al-Fawakih al-Dawani, 1/178)

“The original Sunnah reward (after the recitation of al-Fatihah) is gained by reciting some of (the verses of) al-Quran and in clear even if (he recites) one phrase, but there is a dispute on this. And it must be followed with a condition that it is beneficial (meaningful) … If one recites parts of the verse, he will still receive the original Sunnah reward and it depends on whether it gives meaning like the short verses which give meaning.” (See Tuhfah al-Habib ‘ala Syarh al-Khatib, 2/68)

"The Sunnah reward (of reciting other surahs after reciting al-Fatihah) will be gained by simply (reciting) only one verse. In fact, rewards are still given if he recites part of it (of the verse) if it is beneficial (is meaningful). However, it is better (to recite) three verses. And (reciting) one surah as a whole is way better than reciting parts of a long surah.” (See Tuhfah al-Muhtaj, 2/51-52)

Therefore, we are of the opinion that it is permissible to divide one lengthy verse to parts which are recited in some rakaats in prayer and he will still receive the Sunnah rewards even if he recites parts of it. However, this must be followed with a condition of it being meaningful.

However, this action contradicts the more prioritized one (khilaf al-awla) which is completing the recitation in one rakaat without cutting it. This is because each verse has its own meaning that is interrelated to one another. By cutting or dividing it into some parts, normally, this will make its meaning becomes inaccurate and incomprehensive as what is intended. Therefore, previous scholars are of the opinion that reciting one whole surah in a complete manner is better than reciting parts of it in prayer because it is safer and more cautious in preserving the continuity and topic brought in the verses of al-Quran as being understood from the words of Imam al-Nawawi. (See al-Minhaj Syarh Sahih Muslim, 4/174)

Based on the above discussion and arguments, we conclude that we are of the opinion that it is not a problem to divide one lengthy verse to different parts to be recited in prayer on the condition that it gives understandable meaning. And it is sufficient for him to receive the Sunnah rewards.

However, the action contradicts the prioritized from it (khilaf al-awla), which is by reciting the verse in full in one rakaat without cutting it because it is safer and more cautious in preserving its meaning which is interrelated with one another.

The following words of an Ansar man is enough for us to contemplate. It is told that an Ansar man was shot by an arrow while performing his prayer and his friend (among the Muhajirin) at that time was fast asleep. When the Muhajirin man awoke and saw that his friend’s body (that Ansar man) was covered with blood, he said: “Subhanallah! Why didn’t you wake me up when he first shot you with the arrow?” The Ansar man answered:

“At that time I was in the middle of a surah and I don’t like to cut it (stop it halfway)”.