IRSYAD FATWA SERIES RAMADHAN EDITION 168: THE RULING OF AN AMIL KEEPING THE CHANGE MONEY OF ZAKAT 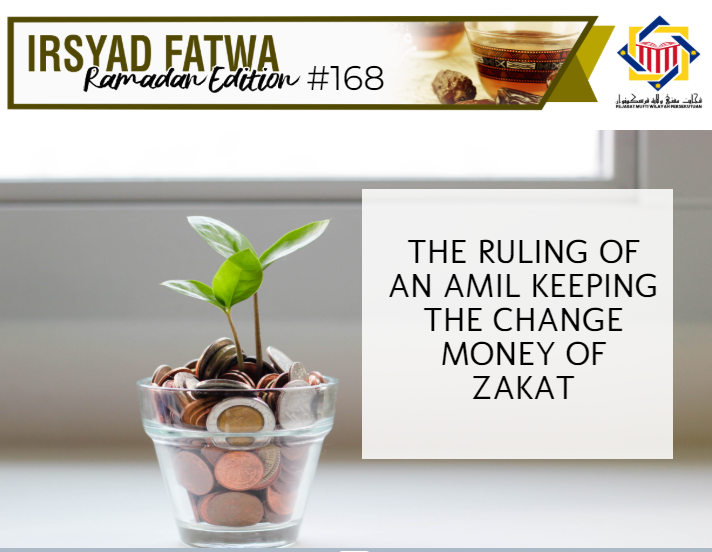 Is it permissible for me (amil) to keep the change money from the zakat paid? Sometimes, zakat fitrah payer does not want to take his change. Is it sinful for me to take it? Hope for an explanation. Thank you.

Amil of zakat is defined as those who are directly involved with zakat institutions whether they are individuals or organisations to manage and administer all matters related to zakat including the collection, distribution, financial administration and etc.

Amil is one of the recipients of zakat according to the saying of Allah SWT in the Quran:

Zakah expenditures are only for the poor and for the needy and for those employed to collect [zakah] and for bringing hearts together [for Islam] and for freeing captives [or slaves] and for those in debt and for the cause of Allah and for the [stranded] traveller - an obligation [imposed] by Allah.

In fulfilling the duties as an amil, sometimes, the payer of zakat does not want to take the change money of the zakat paid. Is it permissible for the amil to keep the change?

And whoever betrays, [taking unlawfully], will come with what he took on the Day of Resurrection.

There is a hadith on the prohibition for an amil to take portion of zakat unlawfully:

The Prophet (ﷺ) appointed a man from the tribe of Bani Asad, called Ibn Al-Utabiyya to collect the Zakat. When he returned (with the money) he said (to the Prophet), "This is for you and this has been given to me as a gift." The Prophet (ﷺ) stood up on the pulpit (Sufyan said he ascended the pulpit), and after glorifying and praising Allah, he said, "What is wrong with the employee whom we send (to collect Zakat from the public) that he returns to say, 'This is for you and that is for me?' Why didn't he stay at his father's and mother's house to see whether he will be given gifts or not? By Him in Whose Hand my life is, whoever takes anything illegally will bring it on the Day of Resurrection by carrying it over his neck: if it is a camel, it will be grunting: if it is a cow, it will be mooing: and if it is a sheep it will be bleating!

This hadith indicates that an amil should be amanah (do not betray the trust given to him) in doing his job, does not take any wage or portion more than what is meant for him.

According to Imam al-Nawawi, amils do not reserves the right to ask for more than the amount he is decided to be given by those who appoint him as an amil. (Refer Raudhah al-Tolibin wa ‘Umdah al-Muftin, 2/327-328)

In conclusion, an amil cannot take any wage other than what is given by syara’ which is 1/8 from the zakat collected and special allowance given by those who appoint them.

However, the 65th conference of the Federal Territories’ Islamic Legal Consultative Committee on 19th December 2005M equivalent to 18 Zulkaedah 1425H had discussed on reviewing the portion of 1/8 as the wage of the amil for zakat fitrah in Federal Territories and the decision is as follows:

“The Committee has decided that the wage for the amil in Federal Territories is to be given on the portion of 1/12 with the reason of that generally, the sole duty for Head Amil and Amil is to collect the zakat fitrah and what is related only while the administration is under Majlis.”

If there are zakat payers who do not want to take their change money for the zakat paid, it is haram for the amil to take it. He should put the change money to the mosque’s donation box, giving it to the poor and needy or combine it together with the rest of zakat money.