IRSYAD AL-FATWA SERIES RAMADHAN EDITION 170: IS EATING AT THE BEGINNING OF THE NIGHT CONSIDERED AS SUHOOR? 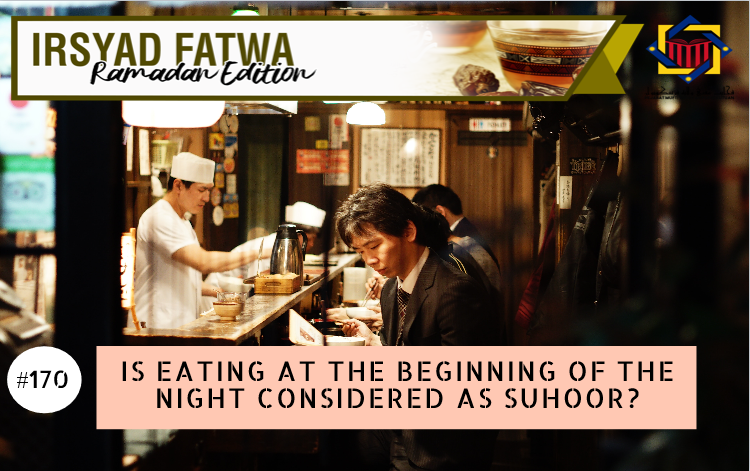 Assalamualaikum. I live together with all my single friends and we would usually have our suhoor after the tarawih prayer which ends at around ten or eleven at night. My question is, is the time that we eat is considered as the time for suhoor or is suhoor is limited to the time of imsak? Hope for an explanation from the Mufti’s Office. Thank you.

The worship of fasting is one of the pillars of Islam and it has been one of the worships of the previous nations. This is as stated by Allah SWT:

Thus, in the worship of fasting, there are manners and sunnah that are encouraged and one of it is eating suhoor. The Prophet PBUH encourages his ummah to take their suhoor for there are numerous advantages and blessings in it. This is in accordance with a hadith narrated by Anas bin Malik RA, where the Prophet PBUH said:

"Take Suhur as there is a blessing in it."

Imam al-Nawawi stated, scholars have agreed that suhoor is among the greatly encouraged sunnah. It is not wajib but there are apparent blessings in suhoor. The reason is it strengthens as well as motivates a person to fast. (See Syarah al-Nawawi ala Muslim, 7/206)

Furthermore, we have also written an article titled IRSYAD AL-FATWA SERIES RAMADHAN EDTION: WHAT IS MEANT BY THE BLESSING IN SUHOOR?

The Time for Suhoor and the Prioritization to Delay It

In answering the above question asked, we present several evidences regarding the time for suhoor so that we can understand the subject matter in-depth. Imam al-Nawawi stated in his book:

“The time for suhoor is in the middle of the night until the sun rises.”

Imam Khatib al-Syirbini stated; And the time for suhoor begins in the middle of the night as stated by Imam al-Rafi’e in al-Iman and this is also stated in al-Majmu’. According to another opinion on the beginning time (for suhoor) it is at the last one-sixth of the night. (See Mughni al-Muhtaj, 2/166)

Dr Muhammad al-Zuhaili said that the time for suhoor is between the middle of the night until the sun rises and it is considered as suhoor even with just a sip of water. And it is sunnah to delay the suhoor. (See al-Mu’tamad fi al-Fiqh al-Syafi’e, 2/189)

This is as stated in a hadith narrated by Ummu Hakim binti Wada’ who said, I heard the Prophet PBUH said:

“Hasten in breaking your fast and delay the suhoor.”

Imam al-Nawawi also stated that the ashab of al-Syafie and other scholars have agreed that suhoor is sunnah and delaying it is prioritized. (See al-Majmu’ Syarh al-Muhazzab, 6/360)

The duration of which suhoor should be delayed is up to the time when a person is able to recite 50 verses of the Quran. This is narrated as when the Prophet PBUH had his suhoor according to the hadith from Zaid bin Thabit RA who said:

"We took the Suhur with the Prophet (ﷺ). Then he stood for the prayer." I asked, "What was the interval between the Suhur and the Adhan?" He replied, "The interval was sufficient to recite fifty verses of the Qur'an."

In explaining the issue of eating suhoor at the beginning of the night, it is not named as suhoor and he would not receive the rewards of suhoor. This is stated by al-Syeikh al-Dimyati:

The time for suhoor is in the middle of the night, then if a person eats before its time (the middle of the night), then it is not considered as suhoor. Thus, there is no reward of suhoor for him. And it is prioritized to delay it until it is near the time of fajar of 50 verses of the Quran. (See al-I’anah al-Talibin, 2/277)

Coming back to the above question and the discussion of scholars that followed, we conclude them as the following:

Thus, we advised us all to eat or drink even if it is just a little in the middle of the night or at the end of its time to attain the advantages and blessings of suhoor. This is as stated in a hadith narrated by Abu Said al-Khudri RA, where the Prophet PBUH said:

“Eating during suhoor is a blessing. Don’t you leave it even if it is just with a sip of water. Indeed, Allah shower His blessings and the angels supplicate for those who eat suhoor.”

May Allah SWT give us taufiq and hidayah to benefit from this Ramadhan. Wallahua’lam