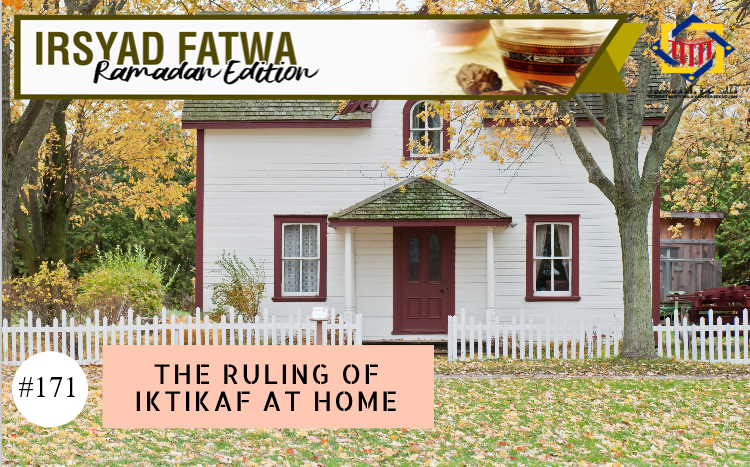 Assalamualaikum. As we know, iktikaf in the last 10 days of Ramadhan is an encouraged worship. However, in our current situation where we are forced to close the mosques in order to contain the Covid-19 pandemic. Then, is it permissible for us to perform iktikaf in a special area in our house to replace the iktikaf in the mosque?

There are numerous narrations which explained the encouragement of iktikaf, among the narrations is from Abdullah Ibn Umar R.Anhuma, where he said:

“The Messenger of Allah (ﷺ) used to perform I'tikaf during the last ten days of Ramadan.”

It is also narrated from Ummul Mukminin A’isyah R.Anha, she said:

According to the above evidences, al-Imam al-Nawawi Rahimahullah stated the ruling of iktikaf is sunnah mu’akkadah (greatly encouraged). It is sunnah all the time, but it is especially encouraged in the last ten days in the month of Ramadhan. With the purpose of following the guidance of the Prophet PBUH and to seek Lailatul Qadr. (Refer Raudhah al-Tolibin 2/389)

Is Iktikaf Only Applicable in Mosques?

“And do not have relations with them as long as you are staying for worship in the mosques.”

“And take, [O believers], from the standing place of Abraham a place of prayer. And We charged Abraham and Ishmael, [saying], "Purify My House for those who perform Tawaf and those who are staying [there] for worship,”

From these words of Imam al-Nawawi, it shows that although the final opinion says that it is impermissible, however it signals that there is no consensus on the matter.

“Scholars have agreed that the condition for iktikaf is in the mosque, except Muhammad bin Umar bin Lubabah – scholars of madhhab Maliki – who ruled iktikaf permissible in any place; Hanafiyyah scholars ruled it permissible for women to perform iktikaf in her house and on this issue there is a qaul qadim in madhhab Syafi’e which one wajh of the opinion among Syafi’iyyah scholars whilst Malikyyah scholars permits iktikaf at home for sunnah worships are prioritized to be performed at home. (Refer Fath al-Bari Syarh Sahih al-Bukhari 4/272. Also cited by Imam al-Syaukani in Nail al-Autor 4/317)

On this basis, Syeikh Dr Ali Muhiyiddin al-Qaradaghi issued a fatwa on this issue and among the contents of the fatwa affirms that:

This fatwa is issued on several considerations:

However, Syeikh also reminded that iktikaf performed at home should maintain the conditions and dhawabit (guidelines) of iktikaf which are:

A very similar fatwa is issued by Syeikh Muhammad Abd al-Sami’, the Fatwa Secretary of Dar al-Iftaa al-Misriyyah which states that it is permissible for a woman to perform iktikaf in the praying area in her house, while for a man who always perform iktikaf in the month of Ramadhan in previous years and set the intention for iktikaf this year, inshaAllah he would receive the rewards of iktikaf the same as if he performed it in a mosque. [2]

However, this permissibility is only temporary and it remains permissible as long as the mosques and surau where Friday prayers are performed are closed from the public. An Islamic legal maxim states:

“A necessity is limited to its rightful extent.”

However, after the situation stabilizes and the spread of the Corona virus has been successfully been contained and mosques are reopened, then it shifted back to the original ruling, where iktikaf is only permissible in mosques and surau where Friday prayer is performed.

In short, we would like to state that the original ruling for iktikaf according to the majority of scholars is it must be in a mosque, for both man and woman. However, in our current situation where mosques and surau are forced to close in an effort to curb the spread of Covid-19 pandemic, it is permissible to perform iktikaf at home in order to perform worship according to the qaul qadim of madhhab Syafi’e, several opinions from other madhhabs and fatwa of contemporary scholars.

This opens the space for Muslims to increase their opportunities to perform worship and multiply their rewards, especially during this honoured and blessed month of Ramadhan.