IRSYAD AL-FATWA SERIES RAMADHAN EDITION 172: WILL A MOTHER WHO COOKS AND PREPARES THE FOOD FOR BREAKING FAST RECEIVE THE REWARDS OF PROVIDING FOOD FOR THOSE WHO ARE FASTING? 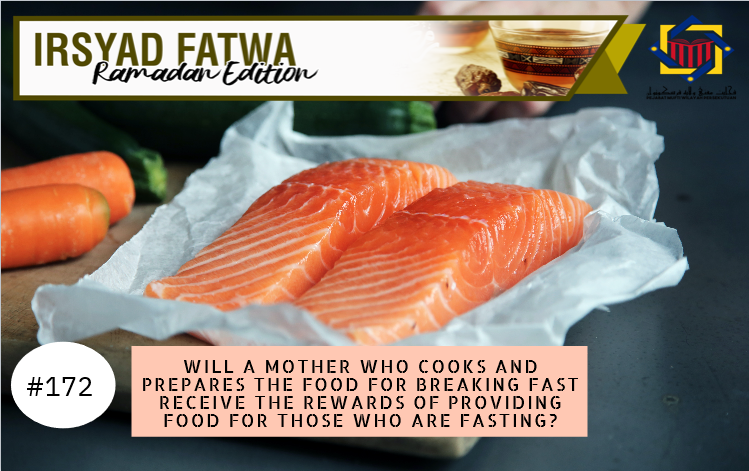 Assalamualaikum ustaz, will a mother who cooks for her family receives the rewards of providing food for those who are breaking fast?

In the month of Ramadhan, we are greatly encouraged to increase our good deeds. Among the good deeds encouraged is providing food for people who are breaking fast. This is in accordance with a hadith narrated by Zaid bin Khalid al-Juhani RA, where the Prophet PBUH said:

Furthermore, Imam Izzudin Al Izz bin Abd al-Salam when explaining the benefits of providing food for those who are fasting said: “Whoever provides food to 36 people who are fasting throughout the year, then he would receive the rewards of fasting for a whole year.”

The reason is for every good deed performed by a person, he will receive 10 rewards of it as stated in the statement of Allah SWT:

“Whoever comes [on the Day of Judgement] with a good deed will have ten times the like thereof [to his credit],”

Thus, when a person provides food to 36 people who are fasting, then he would have received the rewards of fasting of 36 times. After that the rewards are multiplied by 10 for each, which makes a total of 360 rewards and this is the total number of days in a year according to the hijri calendar.

Thus, there are differences of opinions among jurists as to whether the food given is filling or any other form of food such as dates, a glass of water, light refreshments and others, in our opinion, the prioritized type of food is of which is filling. While for a person who provided food such as dates and a glass of water is also rewarded for the act of providing food.

This is clear from a narration by Salman al-Farisi RA, he said, the Prophet PBUH said:

Thus, the lesson from the above hadith is the rewards are given according to the amount of effort for each person in providing food for those who are breaking fast. This is as showed in a hadith narrated by Khalid al-Juhani RA where he said the Prophet PBUH said:

Imam al-Nawawi in the commentary of the above hadith, he said:

“The rewards are a result of every effort, whether it is a little or a lot and (this rewards are also attained) by every individual who takes care of the welfare of their families who went to war in terms of fulfilling their necessities, helping them in terms of monetary or physical help in their affairs and it (the rewards) is different according to the rate of the effort whether it is a little or a lot. In the hadith, there is also encouragement to have ihsan for those who are working for the betterment of the Muslim ummah or taking their place in protecting their responsibilities and interests.”

To conclude, after analysing the above evidences and arguments, we would like to state that for a mother who cooks the food for breaking the fast for her family who are fasting, it is also included as the act of providing food for those who are fasting. The same for all of her family member, regardless of whether they are her husband or children who also help her in cooking or preparing the food, they would also receive the rewards stated in the hadith. This reward is according to the effort put into it, in terms of the greater the effort the greater the rewards. Wallahua’lam.