IRSYAD FATWA RAMADHAN EDITION 96: SIGNS AND THE WISDOM BEHIND WHY THE NIGHT OF AL-QADR IS KEPT A SECRET 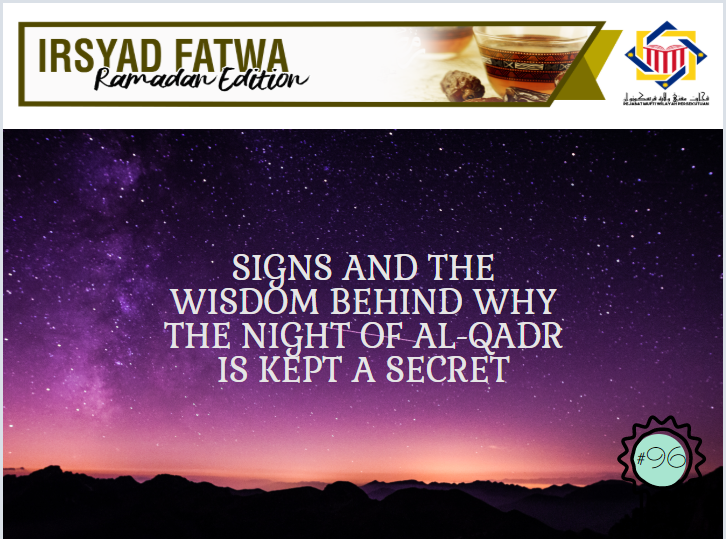 Assalamualaikum. What are the signs of lailatul qadr and the wisdom behind why the night of al-Qadr is kept a secret?

Answering the above question, among the reasons of why al-Qadr is kept a secret is so that it will be a motivation for people to seek for it. Furthermore, it will also increase our determination so that we will put in our best efforts in worship to search and attain the night of al-Qadr. This is the same as to why the time where any supplication will be granted on a Friday is also kept a secret.

Regarding to the signs of the night of al-Qadr, some scholars details the signs of al-Qadr which are observed by some Muslims with the permission of Allah SWT every Ramadhan. The signs are collected from various hadiths of the Prophet PBUH which explain the signs of this blessed night:

“Indeed, on that night, it is clear, as though the moon illuminates brightly, it is pleasant, where it is not too cold nor too hot, and the stars are not visible all through the night until dawn. And among the signs are the sun rises bright without rays like a full moon and shaytan has no place to come out with it on the day.”

“And its indication is that the sun rises bright on that day without rays.”

“Indeed, the sun rises from between the two horns of the devil, except on the dawn of the night of al-Qadr.”

An important point to ponder is, if someone knows or predict a certain night as the night of al-Qadr, should he tell other people or should he keep it to himself?

Imam al-Subki issued a ruling in al-Halabiyyat referring to the narration (of which Allah SWT kept the night of al-Qadr as a secret from the Prophet PBUH), that it is sunnah to keep it a secret if someone observes the lailatul qadr. The reason is, it is kept a secret by Allah SWT even towards the Prophet PBUH. Then, the best course of action to take is to follow the sunnah and not tell it to others. This is stated in Syarah al-Minhaj and al-Hawi. Among the wisdoms as to why it is kept a secret, is because it is an honour (karamah) and keeping it a secret is so that he will not be look upon with envy or fall into riyak (performs an act of obedience in order to be praised by people). See Fath al-Bari (268/4).

In al-Hawi it is stated for whoever who observes the night of al-Qadr to supplicate sincerely for his worldly and hereafter needs. However, he should prioritize religious and hereafter needs (when compared to worldly matters). See al-Majmu’ (461/6).

As a conclusion, it is our responsibility as a Muslim who believes in Allah SWT and His messenger the Prophet PBUH to seek for this blessed night of al-Qadr for the great rewards, as commanded to us by the Prophet PBUH in the following hadith:

“Search for the Night of Qadr in the odd nights of the last ten days of Ramadan.”

Lastly, may Allah SWT bless us to be able to find this blessed night of al-Qadr and filling the night with worship and good deeds, enlivening the night, be granted forgiveness and saved from the punishments of the hellfire. Amin.