IRSYAD FATWA SERIES 95 RAMADHAN EDITION: AMOUNT OF ZAKAT FITRAH IS NOT DECIDED BASED ON THE TYPE OF RICE (STAPLE FOOD) WE PERSONALLY EAT 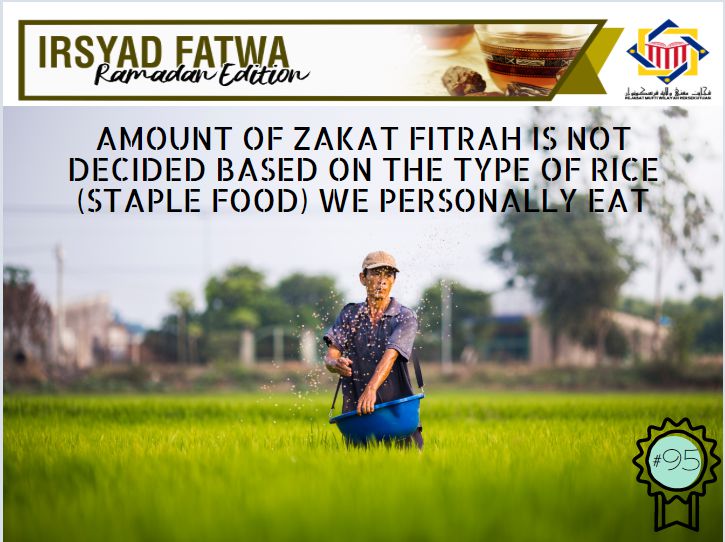 Zakat fitrah is an annual obligation for every Muslim. From Ibn Umar R.Anhuma, he said:

“The Messenger of Allah (ﷺ) enjoined the payment of one sa” of dates or one sa' of barley as Zakat-ul-fitr on every Muslim, slave or free, male or female, young or old, and he ordered that it be paid before the people went out to offer the 'Id prayer.’”

According to scholars of mazhab Syafi’e, the sound opinion regarding the amount payable for zakat fitrah is in accordance with غالب قوت البلد (the staple food for the majority of the citizen). Refer al-Majmu` Syarh al-Muhazzab by Imam al-Nawawi (6/132).

During the 57th Muzakarah of Fatwa Committee of National Council for Islamic Religious Affairs Malaysia on 10th June 2003, it has been decided that the amount for zakat fitrah in Peninsular Malaysia depends on the price of local Super Tempatan ‘A’ Grade rice from BERNAS, according to one Baghdad’s sa’, which is equivalent to 2.60 kg.

The price of zakat fitrah for Sabah and Sarawak depends on the current local rice price decided by BERNAS, according to the price of Vietnam White rice in Sarawak for one Baghdad’s sa’ which is approximately 2.70kg.

Approaching Ramadhan, Sharia’h Council or States’ Fatwa Council will decide the price of rice to be considered as zakat fitrah according to the province, type or grade of rice eaten by the society. Then, the price will be decided, taking into consideration the amount of one sa’ of the rice which is approximately 2.60 kg. [1]

The 99th Federal Territories of Islamic Legal Consultative Committee Meeting on November 30, 2016 at Dewan Syura Perdana, has discussed the "Proposal for Zakat Fitrah Rate Determination in Federal Territory of Kuala Lumpur, Putrajaya and Labuan for the Year 1438H / 2017M". The meeting considered and reviewed this proposal and noted the following:

The committee discussed this matter and decided the rate of zakat fitrah for the year 1438H or 2017M for the Federal Territories of Kualal Lumpur, Putrajaya, and Labuan which is RM7.00.

[1] 1 sa’ according to the syarak or the calculation in Baghdad is 4 mud, which is equivalent to 5 1/3 ratal or 4 handfuls. The weight is 7585 dirham or 2.57 liter or 2176 g. This is the opinion of Imam al-Syafie, the Hijaz jurists and the companions determine it as 1 1/3 ratal Iraqi. While for mazhab Hanafi and the jurists of Iraq, one sa’ is 8 ratal with 1 mud equivalent to 2 ratal, or 3800 g for one sa’. Another famous opinion states that one sa’ is equivalent to 2751 g. Wallahua’lam. Refer al-Fiqh al-Islami wa Adillatuh(1/142) by Syeikh Wahbah al-Zuhaili Rahimahullah.