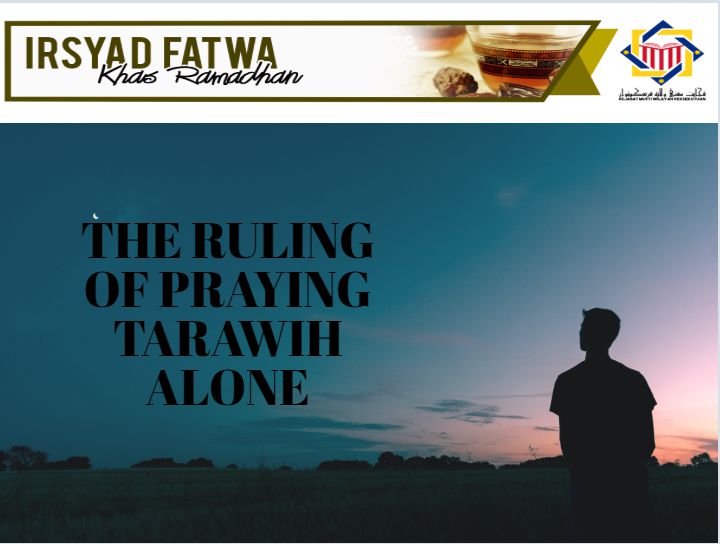 Assalamu‘alaikum SS Datuk Mufti. What is the ruling for someone to perform the tarawih prayer alone?

Tarawih prayer is an encouraged sunnah prayer. There are great rewards for anyone who performs the tarawih prayer as narrated by Abu Hurairah RA, where he said, the Prophet PBUH said:

“Whoever prays during the night in Ramadan out of sincere faith and seeking its reward from Allah, will have all of his previous sins forgiven.”

The above hadith is clear in stating that qiyam in Ramadhan includes tarawih prayer, reciting the Quran, dhikr (remembrance of Allah SWT) and supplication (du’a) and other types of worship on the night of Ramadhan, if it is done due to sincere belief of obeying the sanctioning of Allah SWT and to seek the rewards from Allah SWT, surely, he will be forgiven for all his previous sins.

The sanctioning of tarawih prayer is stated in a hadith from Umm al-Mukminin Aisyah R.Anha, where she said:

“One night, Allah's Messenger (ﷺ) offered the prayer in the Mosque and the people followed him. The next night he also offered the prayer and too many people gathered. On the third and the fourth nights more people gathered, but Allah's Messenger (ﷺ) did not come out to them. In the morning he said, "I saw what you were doing and nothing but the fear that it (i.e. the prayer) might be enjoined on you, stopped me from coming to you." And that happened in the month of Ramadan.”

Regarding the issue of performing tarawih prayer alone, is it permissible? The following we include the opinions of scholars regarding this issue:

Al-Syeikh al-Buhuti Rahimahullah in his book Daqaiq Uli Al-Nuha (1/2245) said: “It is prioritized to perform the tarawih in a mosque compared to others, for the Prophet PBUH performed it in congregation for three consecutive days.” Narrated by Aisyah R.Anha, the Prophet PBUH said:

“If a man prays with the Imam until he leaves, that will be continued for him as if he spent the whole night in prayer.”

Imam al-NAwawi Rahimahullah in Syarah Al-Nawawi ‘Ala Muslim (6/377), discusses this issue stating: The scholars agreed that tarawih prayer is sunnah. Though they have differing opinions regarding which is prioritized; performing tarawih alone or in congregation in a mosque. Imam al-Nawawi divided the opinions as the following:

First opinion: Imam al-Syafi’e and most of Syafi’eyyah scholars, Imam Abu Hanifah, Imam Ahmad, and some Malikiyyah scholars hold the opinion that it is prioritized to perform tarawih prayer in congregation as has been practised by Umar al-Khattab and the companions of the prophet PBUH R.Anhum. And their tradition continues (performing tarawih in congregation) to showcase the eminence of Islam, the same the Eid prayer.

Second opinion: Imam Malik, Abu Yusuf and some Syafi’eyyah scholars hold the opinion that it is prioritized to pray alone in one’s house. This is in accordance with the hadith of the Prophet PBUH:

“For the best prayer of a person is that which he prays in his house except the compulsory prayers.”

Nonetheless, in Al-Majmu’, Imam al-Nawawi said: Tarawih prayer is sunnah according to the majority of the scholars. It is permissible to be performed alone or in congregation. However, which is prioritized among the two? There are two sound and strong opinion from the agreed consensus of Syafie’yyah scholars stating that performing tarawih prayer in a congregation is prioritized. Refer Al-Majmu’ Syarah Al-Muhazzab, Al-Nawawi (3/526).

After analysing the above scholars’ opinions, in our opinion performing the tarawih prayer alone is permissible but the prioritized and best way is to perform it in congregation. We would suggest the readers to read the following murajjihat (dispositions):

Lastly, we pray to Allah SWT to be bless with determination in worship and understanding in religion. Ameen.