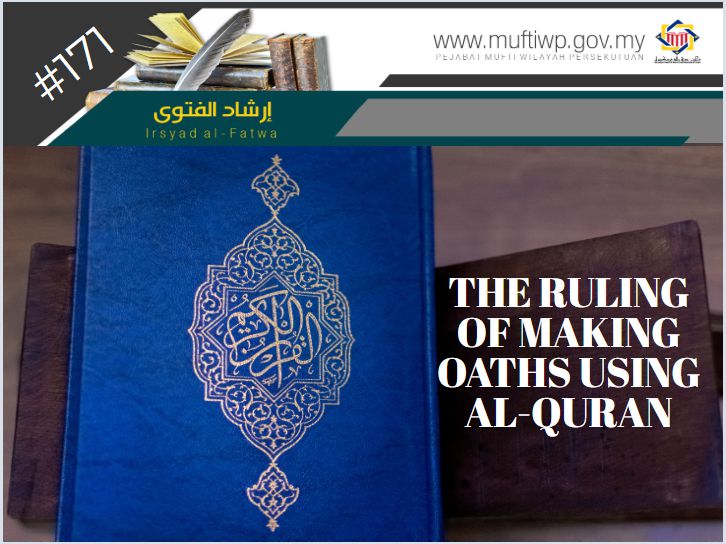 What is the ruling for making oaths using the Quran?

We would start our answer defining the meaning of the term oath. The word aiman (الأيمان) is the plural of yamin (اليمين). Literally it means power or authority. Allah SWT states:

“We would have seized him by the right hand;”

“When the flag is lifted for honor. Surely, 'urabah will find strength in it.”

The word yamin also means the right hand, for strength and authority are related to it. Another meaning for it something that is honored. The reason being, the Arabs would hold out their right hand when they are making an oath. Yamin is used to strengthen words or statements unsupported by evidence, while uttering one of the names or attributes of Allah SWT using certain phrases. It is not used in making meaningless oaths (اليمين اللغو), or oaths that are uttered without any meaning of strengthening or emphasizing something.

For example, someone that always utters the word “no, in the name of Allah (لا، والله)” and no, “indeed, by Allah (بلى، والله)”. Words such as these are not considered as an oath according to syarak. Allah SWT states:

“It (was sent down about such phrases as) a person in his house saying: 'No, by Allah' and 'By Allah.”

Words that strengthen a fact, such as, “By Allah I would one day die,” or “By Allah, indeed, the sun has risen,” when the sun has already risen when he utters it, then it is not considered as an oath.

The reason is, the words themselves are a certainty and it would be impossible for the oath to be untrue. Oaths can, however, be said for something that has happened or is in the past, for example, “By Allah I did not do it,” or “By Allah I did it,”.

This is in accordance with Allah SWT’s statement:

“They swear by Allah that they did not say [anything against the Prophet],”

Oaths can also be made for something in the future, such as, “By Allah I will complete it.” This is in line with a hadith from the Prophet PBUH, where he said:

“I swear by Allah, I shall fight against the Quraysh.”

Regarding the issue of making oaths using the Quran, it is permissible. The reason is, one of the conditions of making an oath is:

One should only make an oath or swear by one of the following:

This is in accordance with a hadith from Abdullah bin Umar R.Anhuma, where Allah's Messenger (ﷺ) met `Umar bin Al-Khattab while the latter was going with a group of camel-riders, and he was swearing by his father. The Prophet (ﷺ) said,

"Lo! Allah forbids you to swear by your fathers, so whoever has to take an oath, he should swear by Allah or keep quiet."

From Umar RA, he said:

In another hadith, the Prophet PUH said:

Furthermore, anyone who swears with anything other than Allah SWT, his oath would be invalid for two reasons:

“Whoever has to take an oath should swear by Allah or remain silent.”

We end our discussion hoping that we would always able to seek knowledge from correct sources in accordance with syarak. May this answer give us a good understanding about our religion and the correct way of making an oath according to syarak. Amin.