IRSYAD AL-FATWA SERIES 135 : FASTING ON THE 10TH OF MUHARRAM SHOULD BE FOLLOWED BY ANOTHER DAY OF FASTING? 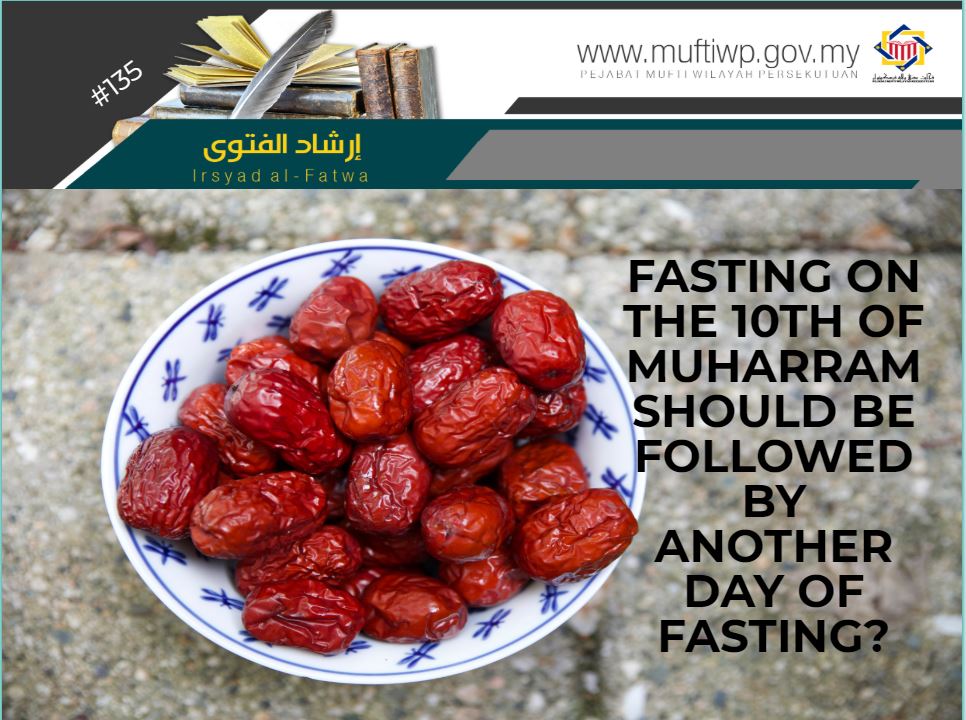 Assalamualaikum Datuk Mufti, if I have fasted on the 10th of Muharram, is it necessary for me to fast on the day after that?

Wa’alaikumussalam w.b.t. Alhamdulillah, praise and thanks to Allah for the many countless blessings He has blessed us all with. Blessings and salutations to the Prophet Muhammad PBUH, his wives, his family, companions and all those that follow his teachings to the day of judgement.

The month of Muharram is undeniably one of the honourable months in Islam. There are numerous Quranic and prophetic evidences that mentioned the advantages of this particular month.

The Advantages of the Month of Muharram

Allah SWT stated the advantages of this month in the Quran:

“Indeed, the number of months with Allah is twelve [lunar] months in the register of Allah [from] the day He created the heavens and the earth; of these, four are sacred. That is the correct religion, so do not wrong yourselves during them.”

The Prophet PBUH explains the four sacred months mentioned in the above verse:

“The year is twelve months, four of which are sacred. Three of them are in succession; Dhul-Qa'da, Dhul-Hijja and Al-Muharram, and (the fourth being) Rajab Mudar (named after the tribe of Mudar as they used to respect this month) which stands between Jumad (al-thani) and Sha'ban.”

Thus, the two evidences above clearly show how Muharram is honoured as one of the sacred months in Islam, where wars are prohibited and the rewards for worship is increased. While sins and misdeeds are also greatly judged during these sacred months.

The Encouragement of Fasting in the Month of Muharram

Among the worships encouraged in Muharram, one of it is sunnah fasting. This is stated in a hadith from Abu Hurairah RA, where he reported that the Prophet PBUH said:

“If you will fast after the month of Ramadan, then fast Al-Muharram, for indeed it is Allah's month.”

According to the above hadiths, there are two advantages for the month of Muharram:

The Encouragement of Fasting on the Day of ‘Asyura

Although it is encouraged to fast all through the month of Muharram, there is a specific prophetic evidence stating the great advantage of fasting on the 10th of Muharram or also known as the Day of ‘Asyura. This is in accordance with several hadiths of the Prophet PBUH.

“Fasting the day of ‘Ashura’, I hope, will expiate for the sins of the previous year.”

In another narration by Abdullah Ibn Abbas R.Anhuma, he said:

“The Prophet (ﷺ) came to Medina and saw the Jews fasting on the Day of Ashura. He asked them about that. They replied, "This is a good day, the day on which Allah rescued Bani Israel from their enemy. So, Moses fasted this day." The Prophet (ﷺ) said, "We have more claim over Moses than you." So, the Prophet fasted on that day and ordered (the Muslims) to fast (on that day).”

Both hadiths are clear evidences for the sanctioning of sunnah fasting for Muslims on the Day of ‘Asyura.

The Commandment to Differ from the Jews

Even though we are encouraged to fast on the 10th of Muharram, we are also encouraged to fast on the day preceding it or the day following it. The reason being, Muslims are commanded to differ from the Jews who fast only on the 10th of Muharram. This is in accordance with a hadith of the Prophet PBUH from Ibn Abbas R.Anhuma, where he reported that the Prophet PBUH said:

“Fast on the Day of ‘Asyura and differ from the Jews. Fast on the day before it or after it.”

The same is stated in another hadith from Abdullah Ibn Abbas R.Anhuma, where the Prophet PBUH said:

“If I live till the next (year), I would definitely observe fast on the 9th(Muharram),”

“When the next year comes, God willing, we would observe fast on the 9th,”

From the above hadiths, it is clear that the Prophet PBUH commanded us to fast a day before 10th Muharram or a day after it to differ from the Jews.

The best way to observe the completeness of fasting for the Day of ‘Asyura is stated by Imam Ibnu Qayyim al-Jauziyyah in his book Zaad al-Ma’ad:

Lastly, we would like to state that it is sunnah to fast on the 9th Muharram or 11th Muharram along with the fast on the Day of ‘Asyura to differ with the Jews. We pray that Allah SWT give us understanding and bless us in our every day lives. Ameen.