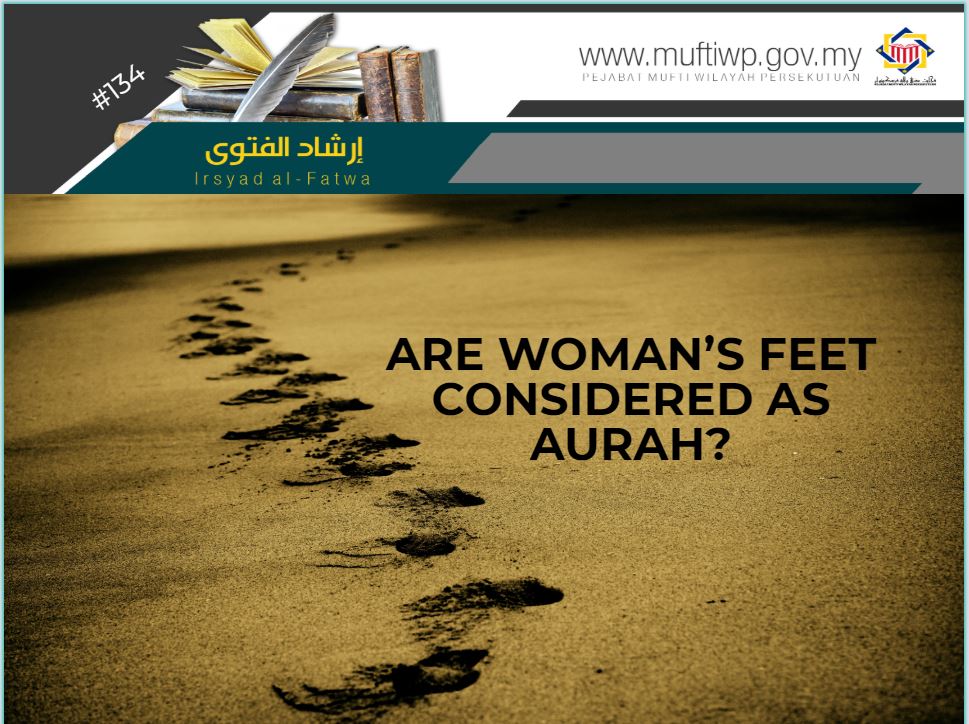 Are the feet of a woman considered as aurah? I always see woman not wearing socks and her feet are visible, sometimes even during prayer. I hope for an explanation.

The issue of whether the feet of a woman is a part of aurah or not are elaborately discussed by scholars. They have two differing opinions on the matter:

This is the opinion of the majority of scholars from mazhab Maliki, Syafi’e and some scholars of mazhab Hanbali.

This is the final opinion of scholars from mazhab Hanafi and al-Imam al-Muzani from mazhab Syafi’e and Syeikh al-Islam Ibn Taimiyyah.

Discussion of the Opinions of Scholars

The majority of scholars hold the opinion that state the feet of a woman is aurah. They referred to a hadith from Umm Salamah R.Anha, where she asked the Prophet PBUH:

“Can a woman pray in a shirt and veil without wearing a lower garment?” He replied: “If the shirt is ample and covers the surface of her feet.”

Al-Imam al-Khattabi Rahimahullah commented on the above hadith:

“This is the evidence for the opinion stating that a prayer is invalid if a part of the body is revealed, unless if the clothes worn is big and covers the surface of her feet. Thus, one of the valid conditions of prayer is to cover all parts of the body.” (See Ma’alim al-Sunan. Al-Matba’ah al-‘Ilmiyyah, 1/180)

While al-Imam Ibn Qudamah al-Maqdisi stated in his book al-Mughni:

“And Malik, al-Auza’ie and al-Syafi’e have stated that all parts of woman is aurah with the exception of her face and both palms, and everything else is obligated to be covered during prayer.” (See al-Mughni, 1/431)

Whereas, for the second opinion that the feet of a woman are not aurah, it is because feet are the part of the body that are usually exposed in everyday lives.

The second opinion is the final opinion in mazhab Hanafi. It is also the opinion of al-Imam al-Muzani from the Syafi’eyyah scholars and Syeikh al-Islam Ibn Taimiyyah from Hanabilah scholars.

This is recorded by al-Imam Ibn ‘Abidin:

“Indeed, feet are not aurah according to the final opinion.” (See Hasyiah Ibn ‘Abidin, 6/369)

The same is said by al-Imam Ibn Qudamah in al-Mughni:

Since there are differing opinion regarding this issue, we are of the opinion that a woman’s feet are aurah, since it is the safer opinion, and avoiding indulging into the khilaf.

Thus, the prayer of a woman is invalid if her feet are exposed, unless she covers them by wearing socks or any type of clothing that covers them.

However, if we see a woman praying without wearing socks and her feet are exposed, it may be because of her ignorance, or she follows the opinion that does not include feet as a part of aurah. Ask her politely to avoid creating discords among Muslims.

[1] Feet in this discussion are referring to the part below the ankles which includes our heel and sole.