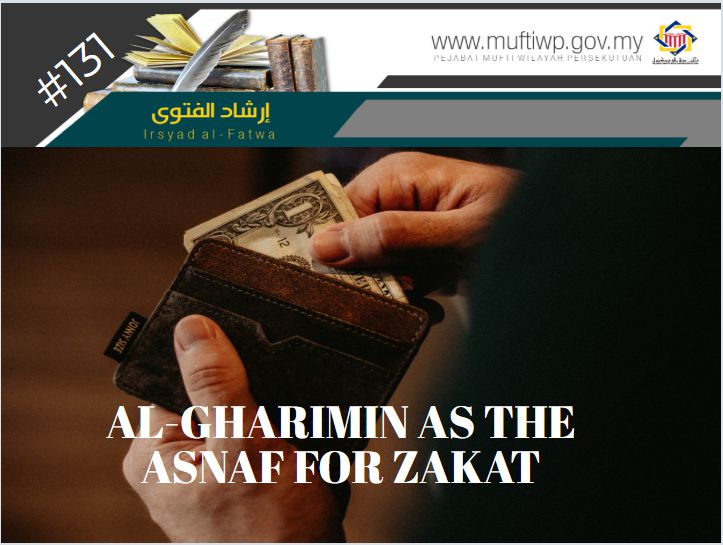 Who is meant as the al-Gharimin stated as an asnaf for zakat?

Regarding the asnaf for zakat, they are the group of people eligible to receive zakat mentioned by Allah SWT in the Quran:

“Zakah expenditures are only for the poor and for the needy and for those employed to collect [zakah] and for bringing hearts together [for Islam] and for freeing captives [or slaves] and for those in debt and for the cause of Allah and for the [stranded] traveler - an obligation [imposed] by Allah. And Allah is Knowing and Wise.”

According to the above verse, it is clear only people who are mentioned above are eligible to receive zakat according to syarak and one of them is al-Gharimin or debtor.

“And those who say, "Our Lord, avert from us the punishment of Hell. Indeed, its punishment is ever adhering;”

And the punishment of hell is ever adhering and everlasting. Thus, it is named al-Gharim, الغارم for the debt becomes his obligation to be settled. Meanwhile, al-Gharim, الغريم (creditors) is named like that because he will regularly bother al-Madin (debtors) to settle his debt.

There are a few conditions set for those who are eligible to receive zakat because he is in debt for himself:

If he is only capable to settle a portion of his debt, then he is eligible to receive zakat to settle the rest of his debt.

If an individual should be able to settle his debt because he is a working individual, he is still eligible to receive zakat, for debts need to be settled according to the stipulated time. Furthermore, even if he has an income, he would need to work for a long time before he will be able to settle all of his debts, at the same time he has to prioritize sustaining his daily needs and his family.

If someone is rich, then automatically he would be ineligible from receiving zakat, for he is capable to settle his own debts. If he has property (land), house, clothes or tableware but he has no money to settle his debts, then he is still eligible to receive zakat. The reason is, he still needs his assets to be able to live.

People who are in debt for the sake of others are honoured, for they are willing to be in debt for the benefit of others. For example, a person acts as a mediator in resolving a conflict or mending the relationship of two parties/qabilah in regards to property or blood (payment of diyat and others), then he uses his own money or property which results in him being in debt, then he is eligible to receive zakat to settle his debts.

The same is for people who are in debt for the benefit of others, such as building orphanages, mosques, hospitals and others for the benefit of the public. Then, he is eligible to receive zakat to settle his debts even if he is rich, in accordance with the opinions of some scholars from mazhab al-Syafi’e. [2]

A guarantor is eligible to receive zakat under the asnaf of al-Gharimin on the following conditions:

This is in accordance with a hadith from Qabisah bin Mukhariq al-Hilali, where he said:

Are Natural Disaster Victims Eligible to Receive Zakat Under the Asnaf of al-Gharimin?

We have addressed the above issue in our article Irsyad al-Fatwa Series 14, discussing the ruling of giving zakat to natural disaster victims referring to the opinion of Mujahid, where he stated that someone who experienced destruction of property due to flood or fire and has family members to provide for, but he is unable to do so and is forced to fall into debt is included in the asnaf of al-Gharimin.

He referred to the above hadith from Qabisah and in the commentaries of the hadith, Syeikh al-‘Azim al-Abadi said: “Whoever experienced destruction of property, whether it is because of extreme temperature, ice, flood and others, which make him unable to sustain himself, then he can ask from others until he has enough to live.” (Aun al-Ma’bud, 3/36)

Several scholars issued their fatwa regarding the asnaf of al-Gharimin and one of them is Dr Yusuf al-Qaradhawi, he states: “I included people who are natural disaster victims and people who experienced huge destruction to their property that forced them to fall into debt as the people in the asnaf of al-Gharimin. Hence, it is permissible for them to receive zakat.” (Fiqh al-Zakat, 2/623)

Dr Husamuddin bin Musa ‘Iffanah, Professor of Fiqh and Usul from the University of al-Quds, Palestine state the same ruling of permissibility for them to receive zakat.

Al-Gharimin has been defined by early and contemporary scholars. Here, we conclude the scholars’ opinions regarding the eligible people to receive zakat under the asnaf of al-Gharimin:

May this explanation regarding the asnaf of al-Gharimin give understanding and information for our Muslim society specifically to be more sensitive in the issues of zakat. Wallahua’lam.

[2] Some scholars of mazhab al-Syafi’e state that anyone who are in debt because they build something, free prisoners of war or provide accommodation for travellers is eligible to receive zakat, even if he is someone who is rich in term of property and not in term of money. [See al-Raudhah al-Tolibin by al-Imam al-Nawawi, 2/319]