IRSYAD AL-FATWA SERIES 128: IS IT SUFFICIENT TO SLAUGHTER ONLY ONE LAMB FOR THE AQIQA OF A SON? 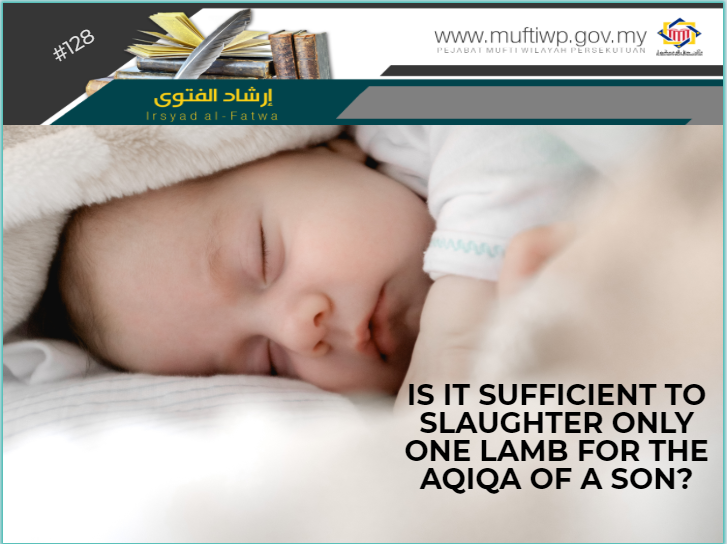 If I want to do aqiqa for my son, is it sufficient to slaughter a single lamb?

‘Aqiqa is sunna for those who can afford it. It is based on a hadith narrated by Salman bin Amir al-Dhabbi r.a:

The Messenger of Allah (ﷺ) is reported saying: Along with a boy there is an 'Aqiqah, so shed blood on his behalf, and remove injury from him.

‘Aqiqa is a sunna to be done on the seventh day of the birth of a child while at same time to name the child and shave the newborn’s hair. This is in accordance with the saying of the Prophet PBUH:

That the Messenger of Allah (ﷺ) said: "The boy is mortgaged by his 'Aqiqah; slaughtering should be done for him on the seventh day, he should be given a name, and his head should be shaved

Pertaining the number of lamb to be slaughtered in doing ‘aqiqa, it is two lambs for a boy. Meanwhile, it is one lamb for a girl. The Prophet PBUH said:

If anyone has a child born to him and wishes to offer a sacrifice on its behalf, he may offer two resembling sheep for a boy and one for a girl.

Referring to the hadith, ‘aqiqa is two sheep for a boy and one for a girl. This is the perfect practice of ‘aqiqa.

Pertaining the question asked; whether it is sufficient to do ‘aqiqa for a boy by slaughtering just single lamb? The answer is it is indeed sufficient and permissible.

This is based on a hadith narrated by Ibn Abbas r.anhuma:

“The Messenger of Allah (ﷺ) sacrificed a ram for both al-Hasan and al-Husayn each (Allah be pleased with them).”

Based on what has been stated by the hadiths mentioned before, we would like to conclude here that doing ‘aqiqa for a boy with a single lamb is permissible. It is a form of practice to show our gratitude to Allah when we are blessed with a child. It is indeed something to be thankful and grateful, for it is a blessing from Allah SWT and the Prophet PBUH is proud of having a large number of ummah. Wallahua'lam.