IRSYAD AL-FATWA SERIES 125: THE RULING OF A MUSLIM TREATING A NON-MUSLIM USING RUQYAH AND VICE VERSA 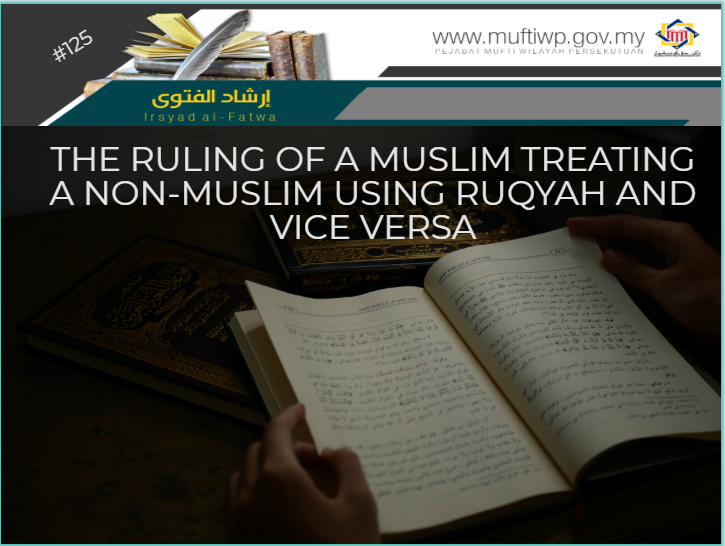 What is the ruling of a Muslim treating a non-Muslim using ruqyah and vice versa?

Ibn Manzhur narrated the words of Ibn al-Athir rahimahullah on the definition of ruqyah: “A protection spell imposed on the sick such as fever and convulsions (epilepsy). Spell here means seeking refuge in Allah SWT.” (Refer Lisan al-‘Arab. Dar Sadir, 14/332)

Ruqyah is performed by writing words and hang it to a particular place or by reciting something from the verse of the Quran, al-Mu’awwizat and Du`a' Ma'thur (supplication based on transmitted reports).

All scholars agreed that it is permissible for a Muslim to treat a non-Muslim using ruqyah. This is in accordance with a hadith narrated by al-Bukhari[1] and al-Muslim[2] by Abu Sai’d al-Khudri RA; there was a time when some Sahabah (companions of the Prophet PBUH) went travelling (safar) out of Medina. When they arrived at an Arab village, it was getting dark. So, they asked for some shelter. However, they were refused help or hospitality. Suddenly, they were informed that the head of the village was bitten by a scorpion and was in a real pain. As the villagers were becoming lost on what to do, they asked the sahabah to help treat their leader. The sahabah refused if there is no reward for them. After agreeing on that particular condition, one of the sahabah performed ruqyah by reciting Surah al-Fatihah. By the will of Allah, the village’s leader was healed.

This situation was then narrated to Rasulullah PBUH and he did not refute the practice. As for the village’s leader, it is recorded that he is not a Muslim.

The scholars have differing opinions in this issue. Al-Imam al-Shafie permitted it, while al-Imam Malik said that it is undesirable according to the Shari’a (makrooh) for ahlul kitab to do ruqyah for a Muslim.

The opinion of permitting it is based on the saying from al-Muwatta’ which said:

Meaning: Abu Bakar RA visited ‘Aishah R.Anha when she was sick. A jewish lady was seen by her doing ruqyah for her. Then, Abu Bakar RA said: “Heal(ruqyah) her with the words of Allah”

Al-Rabi’ bin Sulaiman rahimahullah also commented on this issue stating: ‘I once asked al-Syafie on ruqyah, his answer is: “It is not wrong to do ruqyah by reciting words from the Quran and what is known from the zikr”. Then, I asked further, “Is it permissible for ahli kitab to do ruqyah on a Muslim?” al-Syafie answered, “Yes, if the words of ruqyah are taken from the Quran and zikr”. [Refer al-Umm. Dar al-Ma’rifah, 7/241]

This is also said by al-Imam al-Nawawi in his book al-Majmu’ Syarh al-Muhazzab quoting the same words as recorded by al-Umm. [Refer al-Majmu’. Dar al-Fikr, 9/65-66]

However, the ruqyah must be done in accordance with syarak, does not insult the words of Allah whether by adding something else, or changing the meaning or the pronunciation of the verses of Allah SWT. Wallahua’lam.