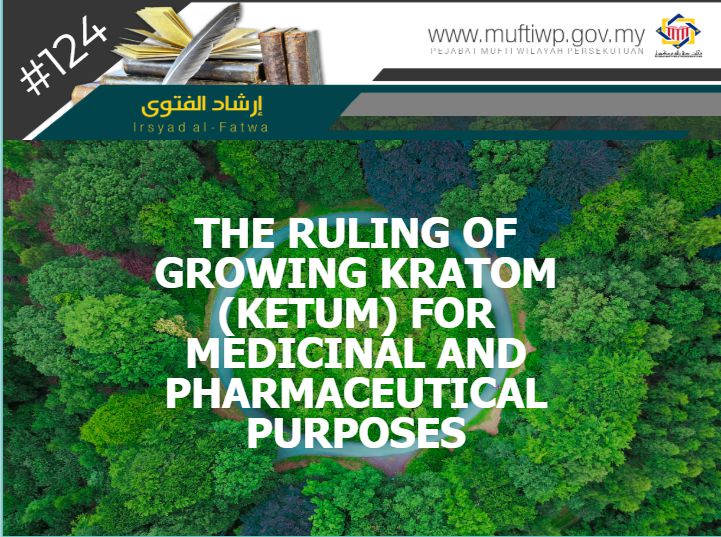 What is the ruling of growing kratom (ketum) for commercial purposes (to be sold to medicine and pharmaceutical industry)?

Regarding the above issue, we will start our discussion with a brief introduction about kratom.

Kratom or the scientific name Mitragyna speciose is an evergreen tropical tree native to the Southeast Asia, specifically found in Thailand and Malaysia. It is traditionally used in treating fatigue, back pains and flatulence problems by the ingestion of raw leaves or consumption of teas made from the leaves of kratom trees.

Kratom tree is popular in the early 2003 as the cause of addiction. It contains a compound known as mitraginin. Mitraginin is a compound listed in Third Schedule of Poisons (Psychotrapic Substance) Regulation 1989, Poison Ordinance 1952. Thus, it is banned in January 2003. [1]

The Ruling of Growing Kratom

Originally, growing kratom is permissible, the same as growing other types of plants. There are no specific evidences that prohibit planting kratom trees, thus, it is included as mubahat (permissible) matters. However, the permissibility could change into a prohibition if there are other factors that proves it brings a greater harm.

The same could be said regarding kratom trees. Undeniably, kratom leaves have been used as a traditional remedy to treat several ailments, however, despite its benefits, there is a greater harm (addiction problem) that has been reported in Malaysia. This is in accordance with Allah SWT’s statement:

“They ask you about wine and gambling. Say, "In them is great sin and [yet, some] benefit for people. But their sin is greater than their benefit."

Al-Imam Ibn Jarir al-Tabari stated in his commentaries; even though there is benefit from them (gambling and wine), however the sin is greater than the benefit. For example, wine is a delicious drink but results in intoxication that would lead to other harm (such as insulting and hurting others or damaging property), that could ultimately lead to murder or accidental killing. The same goes for gambling, for it is a game filled with anticipation and entertainment that promises (uncertain) great wealth, however, it is also the very reason for deception and callousness in humans. There is benefit, but the mafsadat (harms) are greater.

Everything That Is Harmful is Prohibited to be Consumed

Syeikh Dr Yusuf al-Qaradhawi Hafizahullah state in his book al-Halal wa al-Haram fi al-Islam: “It is impermissible for a Muslim to eat or drink from anything, even if it is in a small portion, that could harm him, whether immediately or slowly, such as poison or anything that can harm or trouble him. The same goes for eating or drinking excessively, for excessive drinking or eating is harmful for him.”

A Muslim individual does not own himself, but he is owned by his religion and the ummah in terms of his life, health and property. Everything that a person has, in truth are blessings of Allah SWT for him and it his responsibility to take care of His blessings. Allah SWT states:

“And do not throw [yourselves] with your [own] hands into destruction [by refraining].”

The same as wine (alcoholic beverages - intoxicating), drug is an intoxicant that hinder one’s ability to think rationally, and kratom leaves have the same effects. Thus, regarding this issue the prohibition of drugs and kratom leaves is concluded through qiyas (analogical deduction).

This is supported by Hujjatul Islam al-Imam al-Ghazali Rahimahullah in his book al-Mustasfa where he said, anything that is an intoxicant, whether it is a type of food or drink is prohibited through qiyas with the ruling for alcoholic beverages. It is prohibited as a protection of the intellect (hifz al-‘aql), taking into consideration of the benefit of the prohibition for every Muslim. (See al-Mustasfa, 1/174).

Kratom leaves may have benefits, but the mafsadah is greater, hence, Malaysia’s government also banned it through the Poisons Act 1952, Section 30 (3) by including it as a psychotropic substance. Indirectly employing sad al-Zari’ah (closing the doors of harm); for addiction or abuse of kratom leaves.

Fatwa of the National Council for Islamic Religious Affairs Malaysia

Here we include the fatwa from the National Council on the ruling of drugs such as syabu and new designer drugs, where kratom leaves falls under the same category for the same ‘illah (reason of a ruling) they all share in common; which is as an intoxicant and harmful.

The 76th discussion of Fatwa Committee of the National Council for Islamic Religious Affairs Malaysia convened on 21 - 23 Nov 2006 discussed the Ruling on Substance Abuse of Syabu and Other New Drug Types. The discussion has decided that syabu and other types of drugs have the same harmful effects as ecstasy, katamine and Gamma Hyroxybutyric Acid (GHB).

Therefore, drug abuse of syabu and other new drugs are prohibited and all activities related to the abuse of this drug, such as planting, processing, possession, selling, distributing, buying or allowing the premises to be used for or participate in any activities of the above-mentioned substances are also prohibited.

DISCUSSION OF THE ISLAMIC LEGAL CONSULTATIVE COMMITTEE OF FEDERAL TERRITORIES

On August 1, 2016 equivalent to 27 Syawal 1437H, Islamic Legal Consultative Committee of Federal Territories has decided that the proposed planting or growing of kratom tree is prohibited. This is based on the greater mafsadah (damage) and harm than its benefits.

THE STATEMENT OF MUFTI OF FEDERAL TERRITORIES

After analysing various views and opinions regarding planting or growing kratom trees, we are inclined towards the opinion to avoid planting the said trees for the following reasons:

Furthermore, in our opinion there are many more types of trees that could be commercialized to increase our income other than growing kratom leaves. Lastly, may Allah SWT protect Malaysians from any disasters and give us understanding in religion. Wassalam.