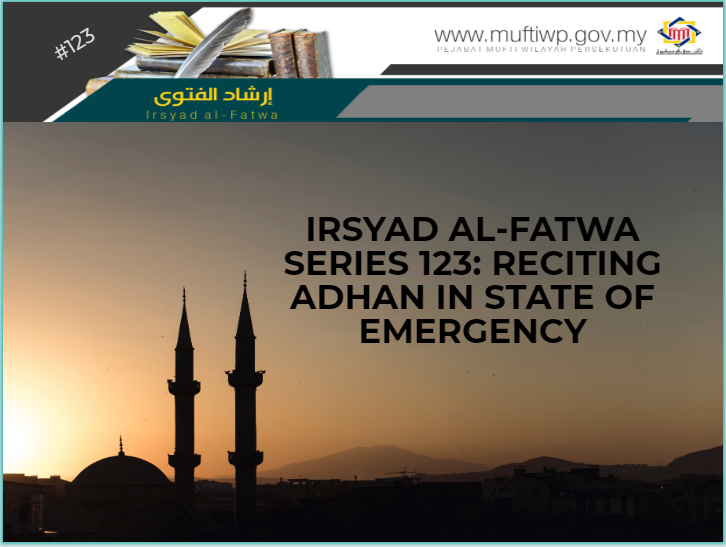 Recently there is a coup attempt (Kudeta) on the Turkish government by military force. What interesting is the mosques all around Turkey recite the adhan although it is not yet the time for prayers. Is this a practice in accordance with syarak?

Adhan and iqamah both are the symbols and identity of Islam. They are also designed as a call for prayers and before performing salah (obligatory prayers). The ruling is sunnah kifayah for the community’s purpose and sunnah ‘ainiyyah for individual purpose.[1]

Recitation of Adhan Outside Prayer Time

There are situations in which the adhan is recited outside of the prayer times. We listed out here the situations and their judgements.

Its basis is a hadith recorded by Abu Dawood and al-Tirmizi narrated by Abi Rafi’, by his dad RA:

“ I saw Rasoolullah PBUH recites adhan at the ears of al-Hassan bin Ali – when he was given birth to by Fatimah – with the same adhan when calling for prayers.”

There is also a statement of the sahabah and tabi’een (athar) said by ‘Abd al-Razzak in al-Musannaf and al-Baghawi in Syarh al-Sunnah in which it is narrated that Umar bin Abdul ‘Aziz rahimahullah when he was granted with a child, he recited adhan at the right ear and iqamah at the left ear. However, this athar is critisized by scholars. Wallahu’alam.

This is based on hadith narrated by Jabir bin Abdullah RA:

“If alghilaan (jinn and devil) troubling (by changing their looks), recite azan”

This hadith is also critisized by scholars. Some said that this hadith is weak (dhai’f) due to a break in the chain of narrators (sanad). Al-Imam Hassan al-Basri which is one of the narrators claimed that he never narrated from Jabir bin Abdullah RA as per claimed by Abu Hatim and al-Bazzar.

Although adhan is meant to call for prayers originally, however, there are situations in which adhan is recited outside of prayer times as being stated by Fiqh scholars. Al-Imam Ibn Hajar al-Haithami said: “It is a sunna to recite adhan outside of prayer times such as adhan at the ear of a newborn baby, a person overwhelmed by sadness and grief, a person experiencing convulsions, in anger, reciting adhan at the ears of a person or an animal who has a bad behavior, when there is a dispute (arm force), when there is fire...”[3]

It is also the case as being recorded in the hasyiahs like in Hasyiah al-Syabramallisi and Hasyiah al-Qalyubi, however with no evidence (dalil) provided to support it. However, based on our observation, due to the fact that adhan can chase away syaitan, its usage is analogically deduced (qiyas) on other conditions outside of the prayer times as being said by al-Imam Ibn Hajar al-Haithami rahimahullah.

In a hadith recorded by Muslim, it is stated that the syaitan will be chased away on hearing the recitation of azan.

“When Satan hears the call to prayer, he turns back and breaks the wind so as not to hear the call being made.”

However, there are scholars who refuse to imply the analogy(qiyas) as being mentioned above and claimed that the situation in which syaitan runs away when hearing adhan is only applicable on the adhan specifically for the prayer times and not the other way around. This is as per claimed by Abu Zur’ah narrated by himself through al-Syabramalisi in his hasyiah. Instead, al-Syabramalisi has his own opinion on this matter, in which he said that it cannot be denied that syaitan will run away, not only for the adhan intended to call for prayers, but also for purposes other than that.

By relying on the opinion given by al-Imam Ibn Hajar al-Haithami rahimahullah and al-Syabramalisi on this issue, we say that it is permissible to recite adhan in state of emergencies such as the incident that happened in Turkey recently. Adhan recitation may perhaps calm the chaos.

Furthermore, adhan would give strength to the Muslims and remind them to rely to Allah SWT while instiling fear in the soul of the enemy. As a conclusion, we would like to state that reciting adhan during the chaotic military situation in Turkey is permissible. Wallahua’lam.