IRSYAD AL-FATWA SERIES 116 : THE RULING OF OFFERING CONDOLENCES TO NON-MUSLIMS 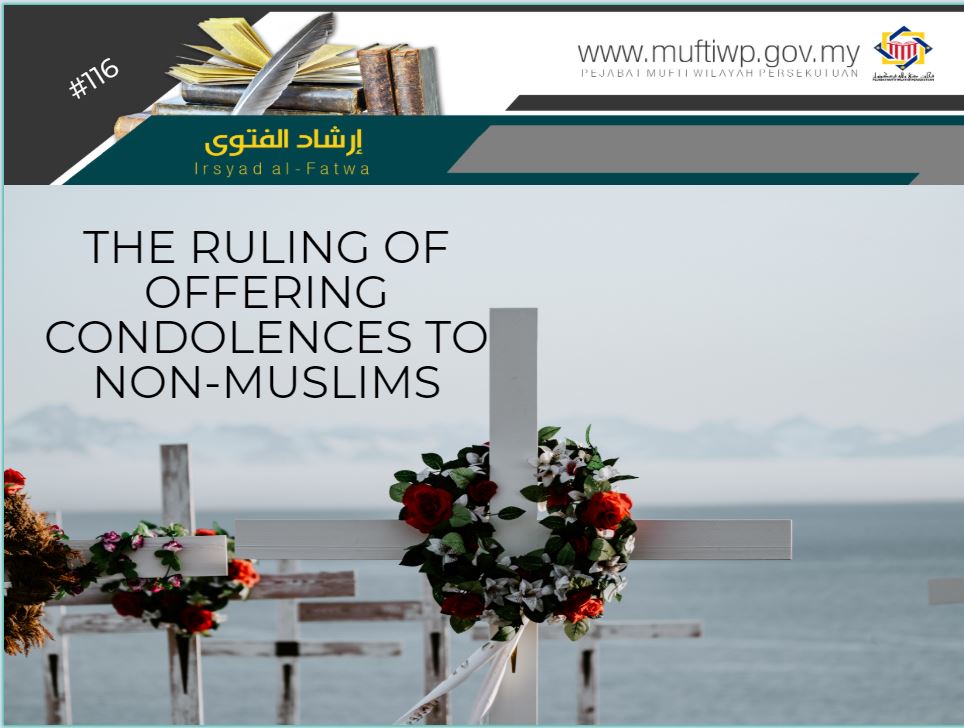 Can we offer our condolences to non-Muslims if there is a death among them?

Scholars ruled it permissible to offer our condolences to non-Muslims when disaster falls upon them, whether it is a death of family members or others, however, they must be among the zimmi non-Muslims and not harbi non-Muslims. This is the opinion of al-Imam al-Syafi’e (w.204H) and al-Imam Abu Hanifah (w.150H). (See al-Majmu’ Syarh al-Muhazzab, 5/275 and Hasyiah Ibn ‘Abidin, 3/140)

Al-Imam al-Nawawi (w.676H) Rahimahullah said: “It is permissible for a Muslim to offer his condolences to a non-Muslim (zimmi) and for a Muslim who has family members who are non-Muslims…” (See Raudhah al-Talibin, 2/145)

Al-Imam Ibn Qudamah al-Maqdisi (w.610H) states the opinion of al-Imam Ahmad bin Hanbal (w.241H) in his book al-Mughni; there are two opinions regarding this issue:

“Do not salute them (Jews and Christians) first,”

If even salutation is prohibited towards the non-Muslims, surely offering condolences is prohibited. (See al-Mughni. Maktabah al-Qaherah, 2/406)

“A young Jewish boy used to serve the Prophet (ﷺ) and he became sick. So, the Prophet (ﷺ) went to visit him. He sat near his head and asked him to embrace Islam. The boy looked at his father, who was sitting there; the latter told him to obey Abul-Qasim and the boy embraced Islam. The Prophet (ﷺ) came out saying: "Praises be to Allah Who saved the boy from the Hell-fire."

According to the above hadith, it is permissible for Muslims to visit sick non-Muslims and to offer our condolences to them. (See al-Mughni. Maktabah al-Qaherah, 2/406)

Offering Condolences to the Non-Muslims

According to fiqh books, such as al-Hawi al-Kabir, al-Majmu’, al-Mughni, among the condolences that we can offer are:

The majority of Islamic scholars ruled it permissible for Muslims to visit and offer condolences to non-Muslims. Furthermore, in certain situations, it is encouraged to visit them if there is an opportunity of maslahah for inviting them to embrace Islam and showcasing the true teachings of Islam.

However, there are several conditions of offering condolences to non-Muslims as listed below:

Thus, comfort them with words of patience and remind them about the reality of life, where everything will eventually end and others.

May this explanation give us understanding in practising our religion and applying it in our daily lives when a death occurs in our community.