IRSYAD AL-FATWA SERIES 111: THE GREAT FLOOD DURING THE TIME OF PROPHET NOAH AS 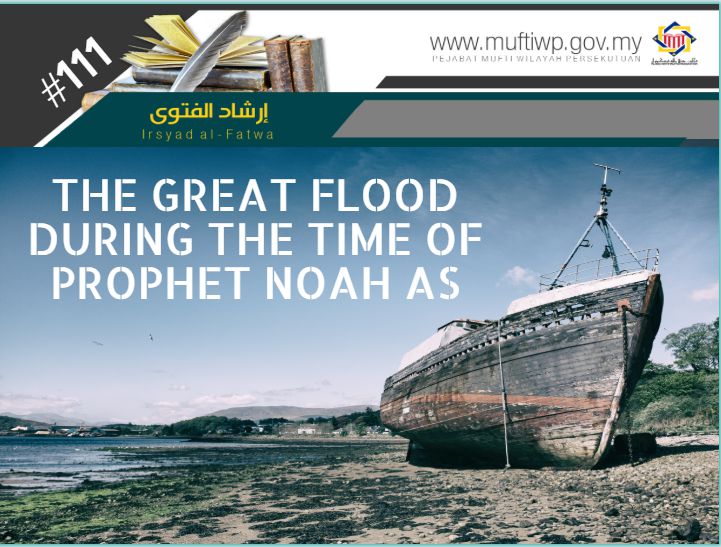 Is it true that during the great flood in the time of Prophet Noah AS, all mankind is destroyed?

There are a few surahs that explained this incident. Here, we include several narrations of this incident in the Quran:

“So, We saved him and those with him in the laden ship. Then We drowned thereafter the remaining ones.”

“[So it was], until when Our command came and the oven overflowed, We said, "Load upon the ship of each [creature] two mates and your family, except those about whom the word has preceded, and [include] whoever has believed." But none had believed with him, except a few.”

“And they denied him, so We saved him and those with him in the ship and made them successors, and We drowned those who denied Our signs. Then see how was the end of those who were warned.”

“And We made his descendants those remaining [on the earth]. And left for him [favorable mention] among later generations: "Peace upon Noah among the worlds." Indeed, We thus reward the doers of good. Indeed, he was of Our believing servants.”

We include the following commentaries of the mufassirun (scholars in tafseer) for the above verses of the Quran:

As for the duration of the great flood, through our research, we found that it happened for 150 days. We include the narration from al-Imam Ibn Kathir (w.774H) Rahimahullah in his book al-Bidayah wa al-Nihayah: “‘Ilba’ bin Ahmar narrated from Ikrimah, while he narrated from Ibn ‘Abbas R.Anhuma, he said: The people together with Noah in his ark are 80 men with their families and they are on board for 150 days…”

The same is stated by Qatadah Rahimahullah where he said: “They aboard the ark on the tenth day of Rejab and set sail for 150 days and anchored on mount al-Judiyy for a month. They finally disembark the ark on the tenth day of Muharram and Ibn Jarir al-Tabari narrated by narration which is attributed to the Prophet PBUH (marfu’) that they were fasting at the time.” (See al-Bidayah wa al-Nihayah. Dar Hajr, 1/272-273)

Regarding the issue of the destruction of mankind, some scholars hold the opinion that the great flood did not affect all mankind, which means not all humans and animals are affected by the flood. However, this opinion is general (umum) in compared to the majority of the scholars (jumhur), in which they referred to evidences which are more specific (khusus). They (the minority opinion) only referred to a general verse of the Quran that states:

“And never would We punish until We sent a messenger.”

According to the above discussion, in our opinion the great flood in the time of Prophet Noah AS destroyed everyone with the exception of the followers of the Prophet Noah AS in his ark.

However, this is not the matter that we should really focused on. We should take lessons from the punishment of Allah SWT towards people who disobey the messenger that has bent sent to them. The wisdom from this incident is for us to uphold and obey everything that the prophets have taught especially following their commandments and avoiding their prohibitions.

May Allah SWT bless us with guidance in our lives and we pray that every one of us will be able to receive mardhatillah. Amin.