IRSYAD AL-FATWA SERIES 109: THE RULING OF JOURNEY FOR UMRAH BY RIDING A BICYCLE 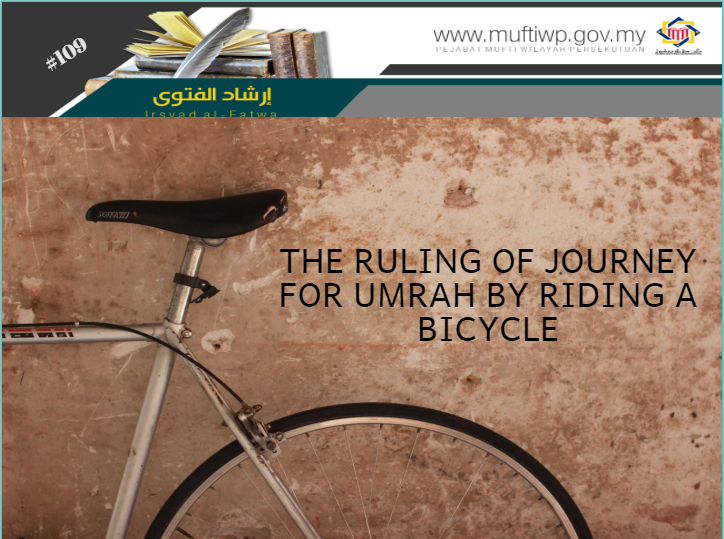 Recently, I heard of a couple of husband and wife are on their journey to Mecca to perform umrah by riding bicycles. What is the ruling of their action?

Recently, our friends came to our office to tell their intention of cycling to Mecca to perform umrah. Alhamdulillah, on the 8th of the month, we had the chance to attend the ceremony of them cycling to Mecca which being held at Masjid Negara. The program is called ‘Misi Kembara Memburu Hikmah’. The mission is to cycle across some countries while completing other missions as well.

We start the explanation by giving some information on the conditions needed to be fulfilled before a person is obligated to perform umrah or hajj. Briefly, they are as follow:

On regard to the question asked, we can see that it is related to the condition of ‘capability (istito’ah)’. The definition and further explanation of the word may be helpful on this.

It is one of the requirements in performing hajj and umrah, which is the expenses (along the journey and the transportation needed). It is the opinion of the jumhur which are Hanafiyyah, Syafii’eyyah and Hanabilah. It is also the opinion of Sahnun, Ibn Habib (one of the scholars in Mazhab Malik) and most of Fiqh scholars.

This is based on the evidences which are used as references in this issue. One of them is:

Capability (istito’ah) in this verse does not refer to the physical capabilities. This is because, if that is what is intended, then there is no need of mentioning it in the verse as Allah, the All-Knowing already knows the capability of His creations and never will He imposes something beyond the limitation of the creations. (Refer Al-Muhalla, 7/54 & Subul al-Salam, 2/180)

In a hadith narrated by Ibn Umar R.anhuma:

"A man came to the Prophet and said: 'O Messenger of Allah! What is it that makes Hajj obligatory?' He said: "The provisions and a means of conveyance."

At the end of the hadith, al-Imam Abu Isa al-Timizi said: The status of the hadith is hasan and a way to impose it is if a man has expenses and transport, it is essential (wajib) for him to perfom hajj.

The word ‘al-Rahilah’ here means a transport that able to bring him to Mecca to perform umrah either by buying it or renting.

Next, Allah says in the Quran:

“And take provisions, but indeed, the best provision is fear of Allah”

Al-Imam Ibn Kathir rahimahullah in his tafseer bring along a story from Ibn ‘Abbas R.anhuma in which the Yemeni people did the pilgrimage, but with no expenses. They even said, “We are the people who only rely on Allah SWT”, then this verse is revealed. (Lihat Tafsir al-Quran al-‘Azim, 1/548)

A man is considered capable when he posses wealth enough for him to do umrah or hajj. It includes travel expenses to go and back, as well as the expenses of travel, passport and fares for umrah or hajj guider as being asked by the government. The expenses or wealth for his hajj or umrah are his surplus savings (extra saving after the deduction of his debts and the expenses for his family during his pilgrimage)

Capability in this context is divided into two types, which are direct and indirect.

First: Direct capability means a man himself is capable in performing the hajj or umrah by his own. It is due to his good health, ability to embark in the journey and capable in completing all the rituals without any sickness or deficiency.

Second: Indirect capability means a mukallaf who possess enough wealth to wage others on doing hajj on his behalf while him being alive or after his death. This is due to his incapability in performing it himself due to some illnesses, old age or any other reasons.

It is based on a hadith narrated by Ibn Abbas RA when a woman came to meet with the Prophet PBUH:

"My mother had vowed to perform Hajj but she died before performing it. May I perform Hajj on my mother's behalf?" The Prophet (ﷺ) replied, "Perform Hajj on her behalf. Had there been a debt on your mother, would you have paid it or not? So, pay Allah's debt as He has more right to be paid."

In another hadith, a man said: 'O Messenger of Allah! My father has died and he did not perform Hajj; shall I perform Hajj on his behalf?'

He said: 'Don't you think that if your father owed a debt you would pay it off?' The man said: 'Yes.' He said: 'The debt owed to Allah is more deserving (of being paid off)."'

“a woman from the tribe of Khath'am came up. Al-Fadl started looking at her and she looked at him. The Prophet (ﷺ) turned Al-Fadl's face to the other side. She said, "My father has come under Allah's obligation of performing Hajj but he is a very old man and cannot sit properly on his Mount. Shall I perform Hajj on his behalf? The Prophet (ﷺ) replied in the affirmative. That happened during Hajjat-al-Wada` of the Prophet (ﷺ) .”

To conclude, we say that istito’ah is the capability in terms of physical and money expenses that able to bring a person to holy Mecca. This included the expenses to reach there, the duration they are there and a peaceful journey back.

After observing and understanding the purpose of our friend going to Mecca by bicycles, we hereby state that it is permissible on the basis of istito’ah that they have. It is clearly stated through the nas in which Allah says in the Quran:

Al-Imam Ibn Kathir rahimahullah in his tafseer upon interpreting the verse said that based on the above mentioned verse, there are scholars who claimed that it is necessary to walk to the Mecca for those capable on doing so, but by vehicles are highly recommended (afdhal). ‘Walking’ mentioned in the hadith means taking it seriously, the power of will and the desire in performing hajj.

If Allah SWT mentioned ‘walking’ which is the hardest way of all is permissible, then surely bicycle is permissible for it is one of the vehicles that existed in our time.

May this righteous intention be rewarded with umrah that is accepted by Allah and may they be eased on doing it.