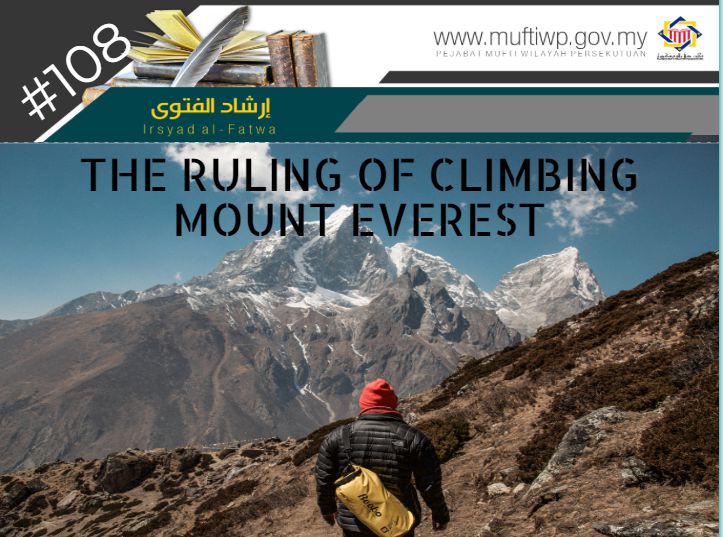 What is the ruling for climbing mount Everest?

Islam encourages its followers to travel, observe and contemplate on the greatness of Allah SWT as the creator of every single thing in this world. Travels with this purpose in mind would strengthen someone’s faith and belief for everything that he sees or experiences are related back to The Creator. Allah SWT states:

“He is Allah, the Creator, the Inventor, the Fashioner; to Him belong the best names. Whatever is in the heavens and earth is exalting Him. And He is the Exalted in Might, the Wise.”

Definition of Climbing and Mountain

According to Kamus Dewan 4th Edition, climbing originates from the verb climb that also means ascending. It is used to describe the action of someone trying to get to the top of a high place. Usually, the word climb is used to climb hill, mountain and others.

Whereas for mountains, Kamus Dewan defined it as a large hill higher than 1500 feet or 457.2 metres. Among famous mountains in the world for climbers are:

Hills and Mountains in the Quran

The creation of mountains is described as pegs that stabilize the earth. Allah SWT states:

“And He has cast into the earth firmly set mountains, lest it shift with you, and [made] rivers and roads, that you may be guided,”

“Have We not made the earth a resting place? And the mountains as stakes?”

Allah SWT showcased the greatness and eminence of the Quran by stating that if the Quran is revealed on mountains, surely, they would come apart in fear of Allah SWT. Allah SWT states in the Quran:

“If We had sent down this Qur'an upon a mountain, you would have seen it humbled and coming apart from fear of Allah. And these examples We present to the people that perhaps they will give thought.”

The Quran also state that the great creations of mountains are for humans to think and contemplate on the greatness of Allah SWT the Almighty.

The Encouragement for Travel, Observance and Contemplation of the Greatness of Allah SWT

Al-Quran discusses the greatness of Allah SWT where Allah SWT emphasizes Himself as the creator for everything. Allah SWT states:

“Say, “Allah is the Creator of all things, and He is the One, the Prevailing.”

To truly appreciate the greatness of Allah SWT, someone would need to travel, contemplate and learn from the wisdoms they observe and experiences they have through their travels. Allah SWT states:

“Say, [O Muhammad], "Travel through the land and observe how He began creation. Then Allah will produce the final creation. Indeed Allah, over all things, is competent."

Syeikh al-Tantawi Rahimahullah states in his commentaries: “Allah SWT then commanded the Prophet PBUH to change the perspective of his people by observing and contemplating His creations. Hopefully, through their contemplation they would arrive to the truth (through observing the creations of Allah SWT).” (See Tafsir al-Waseet, 11/25)

“It is He who made the earth tame for you - so walk among its slopes and eat of His provision - and to Him is the resurrection.”

In a hadith, there is a narration detailing the travels of the Prophet PBUH where he and his companions travel through hills. From Jabir bin ‘Abdullah:

Syeikh Muhammad bin Soleh al-‘Uthaymeen Rahimahullah in his commentaires of the book Riyadh al-Soliheen by al-Imam al-Nawawi Rahimahullah said: “Al-Imam al-Nawawi Rahimahullah placed this hadith in his book (Riyadh al-Soliheen) under the chapter Bab Adab al-Safar (manners for travel), where it is stated that the manner for someone travelling; he should say takbir (once, twice or thrice) when he is climbing a hill or when he is ascending the air by boarding an airplane, while when he is descending he should say tasbih (once, twice or thrice). The reason is, it is easy for humans to feel as though he is better or great when he is in a high place. Through takbir, it would help us remember how small and helpless we truly are in front of the greatness of Allah SWT. Which also means that whenever you feel arrogant, remember that no one is truly great in front of the Greatness of Allah SWT. When descending, say tasbih so that we glorified Allah SWT as He deserves.” (See Syarh Riyadh al-Soliheen, 4/608-609)

For everyone participating in this expedition, they should observe the manners of travelling as stated in the discussion above. Furthermore, one should have a sincere intention of travelling; which is to contemplate on the greatness of Allah SWT.

The following are the suggestions of the intentions one should have, if he is considering to participate in such endeavour:

May Allah SWT bless us with knowledge and guidance in understanding our religion. Ameen.