IRSYAD AL-FATWA SERIES 120: THE SUNNAH OF 6 DAYS FASTING IN SYAWAL SHOULD BE DONE CONSECUTIVELY OR NOT? 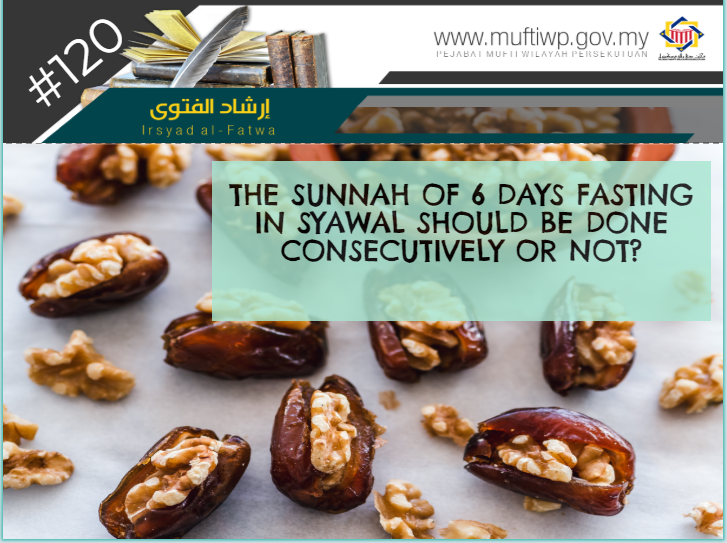 Is it necessary to fast the six days of Sunnah fasting in syawal consecutively?

Al-Imam al-Nawawi commented on the above hadith stating that it is the evidence used in mazhab al-Syafie, Hanbali and Daud (al-Zahiri) who ruled it sunnah to fast six days in Syawal, while the rewards in which they are equivalent to the rewards of fasting a whole year is in accordance with another hadith of the Prophet PBUH, where he said any good deeds will be rewarded and multiplied by 10 (أَنَّ الْحَسَنَةَ بِعَشْرِ أَمْثَالِهَا ) [1].

Should We Observe the 6 Days Sunnah Fasting in Syawal Consecutively?

After learning about the commandment and rewards of the six days sunnah fasting in Syawal, a question arises. Should we observe the fast consecutively or can we observe it separately?

Regarding this issue, al-Imam al-Nawawi Rahimahullah answered it in his book al-Majmu’: “It is sunnah to observe the six days sunnah fasting in early Syawal consecutively. If one observed the fasting separately (not consecutively) or at the end of Syawal, then it is permissible…” [2]

Al-Imam Ibn Qudamah stated in al-Mughni: “…It does not matter (to observe the fast) if it is done consecutively or separately, or at the beginning or at the end of Syawal for the hadith states fast 6 days in Syawal unconditionally without detailing anything else…” [3]

According to the above discussion, we would like to state that there is flexibility in observing the six days sunnah fasting, for it can either be done consecutively or separately, at the beginning or at the end of Syawal. It is not a problem.

In celebrating Eid, surely, we will be invited to numerous functions, events and open houses. Thus, it is not an issue to observe the six days sunnah fasting in Syawal for there is flexibility and great rewards especially for it. It would be better if we could merge two good deeds in the month of Syawal; which are the six days sunnah fasting and maintaining the silaturrahim among us. Wallahua’lam.

[1] Al-Minhaj Syarh Sahih Muslim. Dar Ihya’ al-Turath al-‘Arabi, (8/56). The rewards as if someone fast for a whole year are as follows: Every good deed is multiplied by 10 which means 30 days x 10 = 300 and sunnah fasting 6 x 10 = 60. The total would be 360 thus, this is equal to fasting for a whole year (according to the calculation using hijriyyah calendar). Wallahu a’lam.