IRSYAD AL-FATWA SERIES 119: THE RULING OF ABLUTION DURING ADHAN 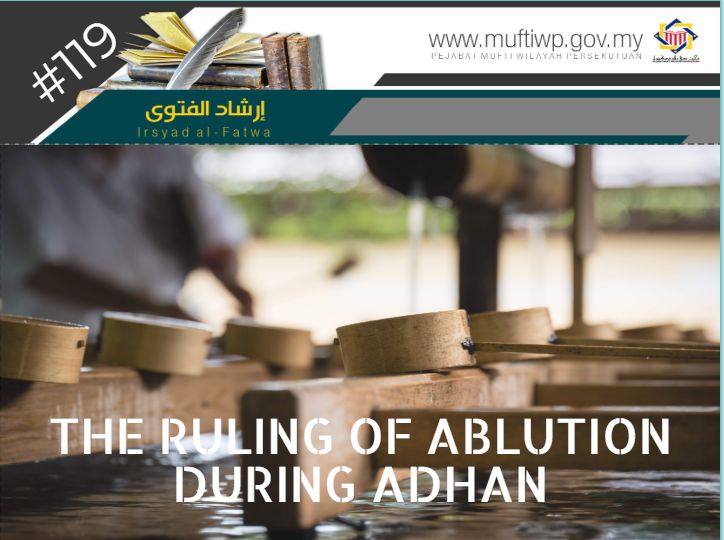 Assalamualaikum S.S Datuk, what is the ruling of performing ablution during adhan?

Waalaikumussalam warahmatullahi wabarakatuh. Alhamdulillah, praise and thanks to Allah for the countless blessings He has blessed us all with. Blessings and salutations to the Prophet Muhammad PBUH, his wives, his family, companions and all those that follow his teachings to the day of judgement.

In answering this issue, we divide it into several situations:

Performing Ablution Before and After the Adhan

“Ablution before the time for prayer is sunnah and prioritized compared to (ablution) after the prayer time. This is the opinion of al-Qammuli in al-Jawahir and ablution is an obligation when the time for prayer begins.” Refer Al-Asybaah wal-Nazhair, al-Suyuthi (1/272).

The Ruling for Answering the Adhan

The commandment to answer the adhan is from a hadith of the Prophet PBUH, where he said:

Based on the above hadith, some fuqaha ruled it obligatory to answer the adhan. The reason is, the command came from the Prophet PBUH himself, where he said: “Repeat…” is a command word in the Arabic language which indicates compulsory (wajib) according to usul al-Fiqh.

However, other fuqaha hold the opinion that answering adhan is sunnah mu’akkadah (encouraged sunnah). They presented another hadith from Anas bin Malik R.Anhu, he said:

The Ruling of Performing Ablution During Adhan

Ablution during adhan is permissible because there are no prohibition or restriction in syarak on this. However, even while someone is performing his ablution, he should try to answer the adhan following the command of the Prophet PBUH:

Lastly, in our opinion the ruling of performing ablution during adhan is permissible. However, it would be best to take your ablution before the adhan for it is prioritized. Performing ablution before adhan would also give us an opportunity to answer the adhan when it is being called. Thus, we would reap greater rewards from Allah SWT. Hopefully this explanation will give understanding to all of us. Ameen.