IRSYAD FATWA SERIES 42: THE RULING OF VISITING GRAVES DURING EID 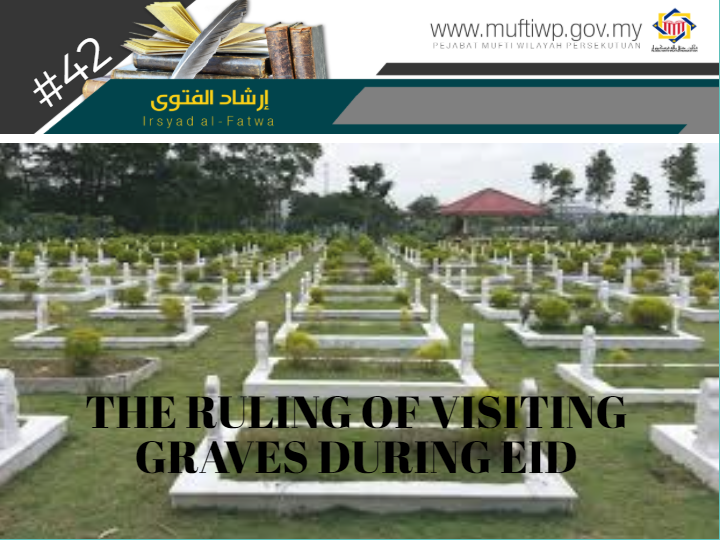 What is the Ruling of visiting graves during Eid?

It is Allah’s blessing to us for giving us strength in continuing our worship on the last days of Ramadhan. As for the question, it was asked numerously by the people. So, we try to come up with the answer to this issue here.

Visiting the graves is originally an encouraged act in Islam. It is sunnah according to a sound opinion. This is in accordance with numerous evidences. Even though the Prophet PBUH on the early days restrict visiting graves, the ruling was then abrogated and he then encouraged it. The following is the hadith of the Prophet PBUH:

“(In the past) I forbade you from visiting graves, but visit them now.”

I asked my Lord's permission to pray for forgiveness for her, but I was not allowed. I then asked His permission to visit her grave, and I was allowed. So, visit graves, for they make one mindful of death.”

The same is stated in a narration by Ibn Majah with a valid chain of narrators, where the Prophet PBUH said:

“I used to forbid you to visit the graves, but now visit them, for they will draw your attention away from this world and remind you of the Hereafter.”

Thus, visiting the graves is a means of remembrance of Allah SWT and would motivate us to worship Him and prepare ourselves for the hereafter.

In regards for women visiting graves, there is a restriction on them, where the Prophet PBUH curse women who visit the graves. However, this issue has been discussed in length by scholars about the reason of the restriction is due to the weakness in their emotions, lamenting and wailing for the deceased following the traditions of the Jahiliyah. Here, we include the conclusion of this discussion with the words of al-Hafiz Ibn al-Arabi when he commented on the hadith narrated by al-Tirmizi stating: “The Prophet permits visiting graves for men and women. However, there are some scholars who hold the opinion that it is makruh (undesirable) for women, the reason being, women are weaker in terms of controlling their emotions in persevering and be patient when visiting graves, or due to the way they cloth themselves (in terms of covering their aurah) completely.”

Next, is the issue of visiting graves during Eid or in the month of Ramadhan. The scholars discussed this issue and their opinions are divided into two:

Imam al-Harawi in his commentary of Sahih Muslim said: “There is no hadith that explains certain days for visiting graves, nor the limit of the number of times one can visit graves.”

After analysing numerous evidences regarding this issue, we are inclined towards the opinion that ruled it permissible to visit graves during Eid, Ramadhan and others. The following are our reasoning:

Hence, a general saying is not specified (remain in its general form).

We would also like to state that it has become a tradition for the people of Terengganu or in the east coast Malaysia to visit graves after the six days of Syawal fasting.

The Fatwa of Syeikh Atiyyah Saqr

To deepen our understanding in this issue, we include the opinion of Syeikh Athiyyah Saqr. He is one of the scholars in Azhar, who was widely known for his knowledge and deep understanding. He is also the former Chairman of Al-Azhar Fatwa Committee. He said: “The original ruling for visiting graves is sunnah, for it is a reminder of the hereafter.”

Thus, it can be concluded that visiting graves after Eid prayer, if the purpose is to remember those who have passed away and ask for blessing from Allah for them through our supplication, then it is permissible for the men. As for the ruling of women visiting graves, this issue has been discussed in the first chapter, pg. 588 of this fatwa (the summary of the chosen opinion of the Syeikh is; it is makruh if there is a possibility of prohibited things to happen such as lamenting and others, if the prohibited things are a certainty, then it is prohibited.)

However, if the act of visiting graves is to renew the sadness and to receive condolences, or to built a shed to receive condolences, then it is restricted. The reason is, receiving condolences after three days the deceased is buried is restricted, where the restriction is either in the form of makruh (undesirable) or prohibited (haram). Furthermore, Eid is supposed to be a day of celebration, not a day of sadness. See Ahsan al-Kalam Fil-Fatawa Wal-Ahkam, (6/646).

Hopefully this explanation gives us understanding, resolve the khilaf and accept the differences in opinions, so that we can strengthen our ukhuwwah Islamiah bonds.