IRSYAD AL-FATWA SERIES 7: RAISING ONE’S HANDS FOR THE SUPPLICATION IN THE SECOND SERMON OF FRIDAY PRAYER 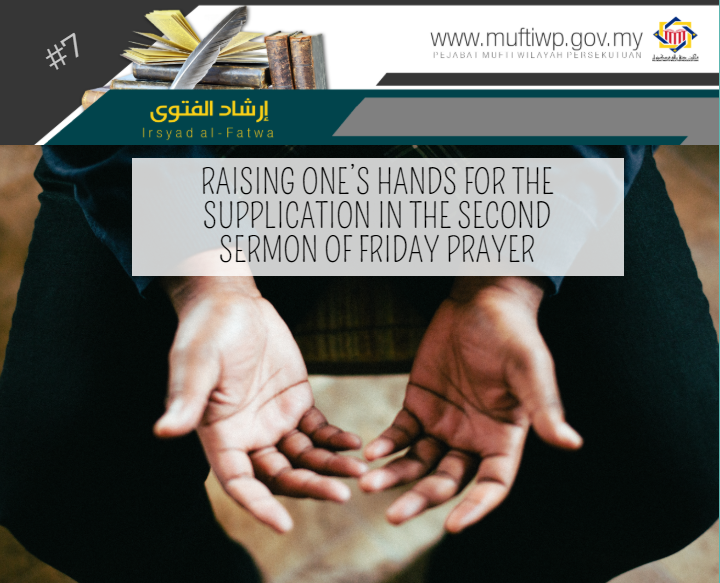 Is it necessary for the makmum of the Friday prayer to raise their hands during the second supplication of the sermon?

And your Lord says, "Call upon Me; I will respond to you." Indeed, those who disdain My worship will enter Hell [rendered] contemptible.”

The same is stated by Allah SWT:

“And to Allah belong the best names, so invoke Him by them. And leave [the company of] those who practice deviation concerning His names. They will be recompensed for what they have been doing.”

From both verses above, they show how Islam encourages supplication to Allah SWT in any type of situations. Regarding the above question, scholars have differing opinions on it. Syeikh Abdul Aziz bin Baz in Fatawa Islamiyyah states that raising one’s hands during Friday sermon is not sanctioned, whether it is for the imam or the makmum, for it is not done by the Prophet PBUH nor by the khulafa’ al-Rasyidin. However, while supplicating for rain during a Friday sermon, the Prophet PBUH raises his hands. He also states: “The same is for the actions of makmum reciting amin for the imam’s dua, I did not find any restrictions on it if it is not done in a raised voice. But the literal meaning from a hadith states that it is sunnah to raise one’s hands and recite amin, for the Prophet PBUH said:

“Your Lord is munificent and generous, and is ashamed to turn away empty the hands of His servant when he raises them to Him.”

We are also encouraged to supplicate during the day and night of Fridays. Dr Wahbah al-Zuhaili in his book Fiqh al-Islami wa Adillatuh said: “It is hoped that one would increase his supplications during the times when it is likely to be granted, where the Prophet PBUH said is on Fridays.”

Among others, the Prophet PBUH said:

"There is a time on Friday at which no Muslim would ask Allah for what is good but He would give it to him." And further said: "This is a very short time."

According to this matter, in our opinion, it is permissible to raise one’s hands and recite amin for the supplication of the imam in a low voice in the hopes that it will be granted by Allah SWT. This is in accordance with several manners of supplication, where the Prophet PBUH said:

Whenever a man entered the fold of Islam, the Prophet (ﷺ) would show him how to perform Salat and then direct him to supplicate: "Allahumm-aghfir li, warhamni, wa-hdini, wa 'afini, warzuqni (O Allah! Forgive me, have mercy on me, guide me, guard me against harm and provide me with sustenance and salvation)."' In another narration: The Prophet PBUH closes all his fingers together except his thumb. For all of them assemble the goodness of this world and the hereafter.”

Regarding wiping one’s face with both hands after supplication, some scholars state that it is encouraged based on several hadiths. Among them is a hadith from Ibn Abbas RA, he said:

"When you supplicate to Allah, supplicate with your palms uppermost, not with the backs of your hands uppermost, and when you finish, wipe your face with them."

Sunan Ibn Majah (3866). This hadith is dhaif (weak) because there is a narrator named Soleh bin Hassam who is stated as munkar al-hadith by al-Bukhari. Abu Hatim evaluate this hadith as munkar. (Al-‘Ilal 2/351)

Another evidence is narrated that al-Saaib bin Yazid said that his father told him that when supplicating, the Prophet PBUH would wipe his face with both his hands. Musnad Ahmad (17943) and Sunan Abu Daud (1494). Al-Zaila’ie said in Nasb al-Rayah (3/43), “There is defect for there is Ibn Lahi’ah.”

Thus, in our opinion it is permissible to raise one’s hands and recite amin for the supplication but with a low voice. While wiping both hands on one’s face after a supplication is encouraged by some scholars, there is not a single hadith that supports it.

May we all be among those who always fulfils his obligation of prayer especially the Friday prayer, at the same time learn the sunnah of the Prophet PBUH through the books of hadith and fiqh.