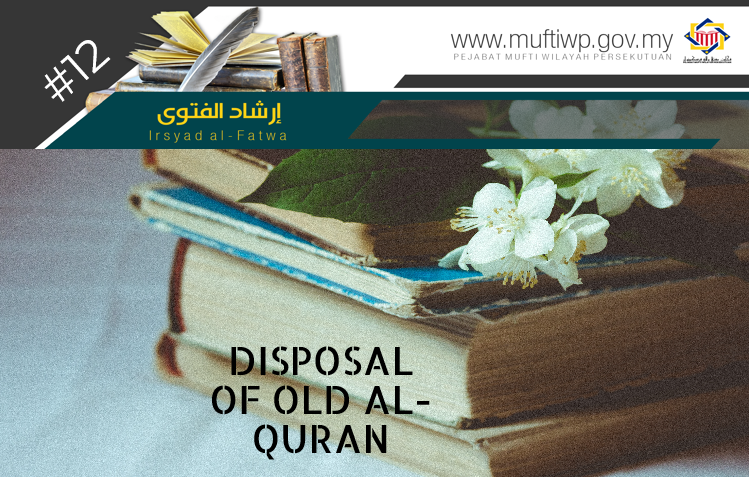 “The deen (religion) is naseehah (advice, sincerity).” We said, “To whom?” He (ﷺ) said, “To Allah, His Book, His Messenger, and to the leaders of the Muslims and their common folk.”

As for advice in His book is read, contemplate, tadabbur and practice it, whether it is the commandments or prohibitions. In Majmu’ al-Fatawa written by our teacher Syeikh Muhammad Soleh al-Uthaimin, he said: “Undoubtedly, for us, Allah SWT describes al-Quran al-Karim with honourable attributes such as wisdoms, noble and virtue.”

Thus, respecting the verses of al-Quran and hadith is part of the symbol of faith in a person. Even if just fragments of these sacred verses are on old newspapers or letters, it should be respected. It is said in history how a sufi honours Allah SWT’s name that falls on earth, his life was changed, where he became a person with real taqwa towards Allah SWT.

Among the best way of disposing materials that contain these sacred texts is by burning them. Other scholars state that they should be burnt and the ashes are collected and thrown to a safe place such as in the sea or buried. There are people who place it in caves where it is protected as what is done in Pakistan.

However, I suggest it to be collected in one place, burnt and buried afterwards. This is according to the actions of the third caliph of Islam Caliph Uthman bin Affan RA, where he collected the Quran into one mushaf and burnt all the other mushaf where there are mistakes in them. His actions were witnessed by the companions of the Prophet PBUH R.Anhum. Ibn Batthal said, the order of Caliph Uthman RA to burn the pages and mushaf of the Quran while it is being collected shows that books containing the names of Allah is permissible to be burnt with the purpose of protecting and honouring it from being step on by the feet of people and from being thrown on earth.