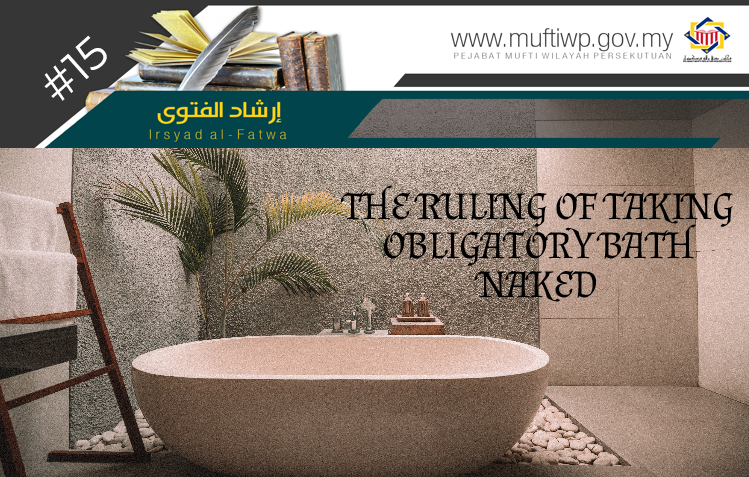 Is obligatory bath valid if it is taken naked?

In al-FIqh al-Manhaji, it is stated: “Allah SWT love those who are clean from hadas and impurities, whether it is material or spiritual impurity.”

Bathing literally means washing something with water on anything. While according to syara’, it means washing the whole body with water with certain intentions. Taking a bath is sanctioned by Allah SWT, whether it is taken for hygienic reasons or to lift hadas and whether it is a valid condition for worship or not. Allah SWT state:

And they ask you about menstruation. Say, "It is harm, so keep away from wives during menstruation. And do not approach them until they are pure. And when they have purified themselves, then come to them from where Allah has ordained for you. Indeed, Allah loves those who are constantly repentant and loves those who purify themselves."

Regarding bathing naked, there are evidences stating its permissibility. Among the evidences is a hadith from Abu Hurairah RA about the story of the Prophet Moses AS who was bathing naked in a far place from the eyes of others. The Prophet PBUH said:

'The (people of) Bani Israel used to take bath naked (all together) looking at each other. The Prophet (ﷺ) Moses used to take a bath alone. They said, 'By Allah! Nothing prevents Moses from taking a bath with us except that he has a scrotal hernia.' So once Moses went out to take a bath and put his clothes over a stone and then that stone ran away with his clothes. Moses followed that stone saying, "My clothes, O stone! My clothes, O stone! till the people of Bani Israel saw him and said, 'By Allah, Moses has got no defect in his body. Moses took his clothes and began to beat the stone." Abu Huraira added, "By Allah! There are still six or seven marks present on the stone from that excessive beating."

Another hadith mentioned the story of the Prophet Job (Ayyub) who took a bath naked. The Prophet PBUH said:

"When the Prophet (ﷺ) Job (Aiyub) was taking a bath naked, golden locusts began to fall on him. Job started collecting them in his clothes. His Lord addressed him, 'O Job! Haven't I given you enough so that you are not in need of them.' Job replied, 'Yes!' By Your Honor (power)! But I cannot dispense with Your Blessings.' "

Furthermore, even Imam al-Bukhari Himself discusses it under the chapter Between a person who is bathing naked alone and the one who covers his awrah, covering his awrah is prioritized.

Al-Hafiz Ibn Hajar in Fath al-Bari said: Imam al-Bukhari uses the story of Prophet Moses and Job who bathed naked as evidence to support the permissibility of taking a bath naked. The reason is, according to Ibn Battal, both of them are prophets and we are commanded to follow them. However, the methodology of the application of this hadith is accurate if we hold on to the principle of the methodology of syarak where previous prophets before the teachings of the Prophet Muhammad PBUH and believe that it is also a part of our syarak. Thus, Ibn Hajar said a clearer evidence states that the Prophet PBUH narrates the story of both prophets bathed naked without commenting on the fact of them bathed naked. This means their syarak is the same as our syarak.

Hence, it is valid to take the obligatory bath naked, but it must be in an enclosed space where no one can see him. The same is for a Muslim who should always maintain his dignity and not uncover his own awrah or shamefulness to others.

“Haya (modesty, bashfulness etc.) is a part of Faith.”