IRSYAD AL-FATWA SERIES 14: THE RULING OF GIVING ZAKAT TO NATURAL DISASTER VICTIMS SUCH AS FLOOD AND OTHERS 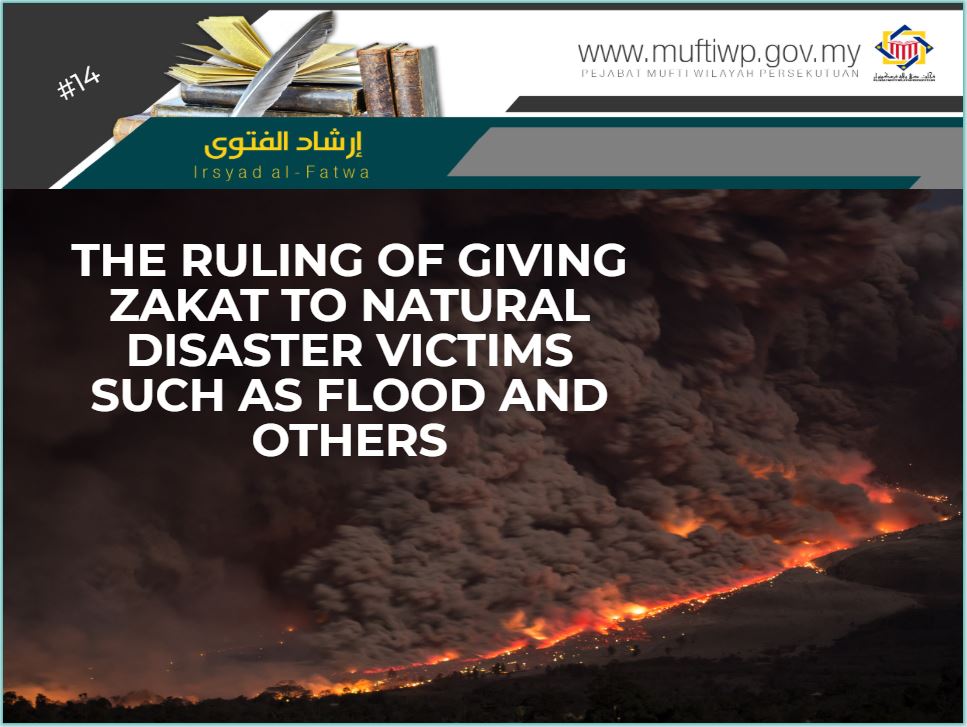 What is your opinion regarding the ruling for giving zakat to flood victims?

Regarding this issue, we should understand that natural disaster victims usually are in dire need of help depending on the destruction they faced. In some cases, only a portion of their assets or property are destroyed, where some may experience a considerable amount of loss while others faced total loss to their property. In this case, let us understand the statement of Allah SWT in surah al-Taubah, verse 60:

“Zakat expenditures are only for the poor and for the needy and for those employed to collect [zakat] and for bringing hearts together [for Islam] and for freeing captives [or slaves] and for those in debt and for the cause of Allah and for the [stranded] traveller - an obligation [imposed] by Allah. And Allah is Knowing and Wise.”

The above verse specifies the only people that have a right (qualified) to receive zakat. The consensus of the fuqaha agrees that it is impermissible to give zakat to people other than the specified people in the above verse.

In mazhab al-Syafie, it is obligated to divide the zakat towards the eight asnaf that have a right to receive zakat. While other mazhab’s opinion state that it is enough to give to a group of the asnaf. This fatwa is issued by Ibn al-Asma’ie and most contemporary scholars agree with this opinion, for it is hard to find all eight asnaf, as stated in Bughyah al-Mustarsyidin.

Regarding the above issue, some scholars hold the opinion that natural disaster that results in the destruction of property, the people involved are in need of help and in debt for themselves or their family. Hence, some scholars include them as the asnaf of al-gharimin or as the people in debt. The scholars set a condition that the debt must be for a necessity (desperate need) and not luxury and indulgence.

Hence, we state that it is permissible to give zakat to people that faced natural disasters, such as a huge flood, typhoon, landslide, earthquake and others that results in the destruction of their home, crops or loss of all their property. They can be categorized as al-gharimin that are qualified to receive zakat.

Other than the above stated evidence, based on opinions of scholars, Mujahid (one of Islamic scholar) states: “3 types of people that are considered as al-gharimin are:

The above statement of Mujahid is in accordance to a hadith from Qabisah bin Mukhariq al-Hilali, he said:

Imam al-‘Azim al-Abadi said: “Whoever that befall on him a disaster from the heaven or earth, such as extreme cold, ice, sink or others like it that results in the destruction of his property and he has nothing left to survive, then it is permissible for him to ask from others until he can live on his own again.” (‘Aun al-Ma’bud 3/36)

One of the scholars that issue a fatwa regarding this issue is Dr Yusuf al-Qaradhawi, where he said: “I specify the characteristics of al-gharimin for victims of natural disasters that faced huge destruction to their property that they are forced into debt, then the ruling is permissible for them to receive zakat.” (Fiqh al-Zakat 2/62)

Dr. Husamuddin bin Musa ‘Iffanah, Professor of Fiqh and Usul from the University of al-Quds, Palestine also ruled it permissible to give zakat to the victims of natural disasters.

My opinion is it is permissible to give zakat to them, based on the presented opinions above and I am inclined to suggest that it must be given through Baitulmal, then Baitulmal will act as the body of authority to disburse the funds by identifying the people who are really in need, according to the destruction assessment made and the necessities needed for each victim. The reason is, if zakat is given directly in huge amounts, it is feared that only some would receive the help they needed while other victims won’t receive any of it. Hence, the people that didn’t receive any zakat will feel wronged by the unjust distribution of zakat.

Baitulmal should mobilize all its resources to solve the problem as soon as possible because the needs in life is immediate. Hopefully this answer will give an enlightenment to those who ask in channelling the aid of zakat or other infaq to help our brothers in Islam who are involved in disasters such as floods and others. Wallahua'lam.