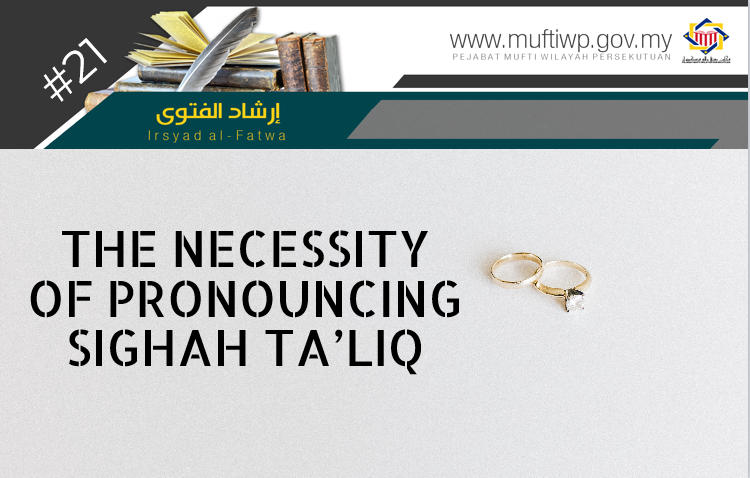 What is the wisdom of the pronouncement of sighah ta’liq (during solemnization) which is a common practice in Malaysia? Is its pronouncement a compulsory matter in the Islamic Family Law in the states in Malaysia? Why is the utterance of talaq stated in a happy and honored occasion of marriage, even if it is conditional talaq?

Islam sanctioned marriage and its conditions perfectly according to strong principles that ensure the stability of community, happiness in families, spreading goodness and protection of good character and conduct while also maintaining the human population. This is in accordance with the statement of Allah SWT:

“…then marry those that please you of [other] women, two or three or four.”

And marry the unmarried among you and the righteous among your male slaves and female slaves.

The same is stated in a hadith from Abdullah bin Mas’ud RA, the Prophet PBUH said:

“0 young men, those among you who can support a wife should marry, for it restrains eyes (from casting evil glances) and preserves one from immorality; but he who cannot afford It should observe fast for it is a means of controlling the sexual desire.”

Before answering the issue of ta’liq, we would like to state that the percentage for divorce cases in Malaysia is worrying. There is an estimatation of 1 divorce case for every 15 minutes and this number has increased eight times compared to eight years ago. Among the causes of divorce cases is the irresponsibility and abuse towards their partner, especially towards the wife.

In truth, it is crucial to consider the issue of ta’liq in a wider aspect. The reason is, the purpose of law is to maintain and protect the harmony and rights of each individual, which includes the pronouncement of ta’liq. All of this is according to the experience of those who are married where there are numerous times when the rights of a wife are neglected. Thus as (سَدُّ الذَّرِيْعَة) the law of ta’liq is introduced.

In our opinion, with our current situation and numerous cases reported, the pronouncement of sighah ta’liq is reasonable to be applied, although there may be a need to amend several conditions and the words of ta’liq itself by experts and researchers regarding this issue.

Hopefully, this explanation will give us understanding regarding the responsibilities and rights of husband and wife that should be fulfilled by both parties.