IRSYAD AL-FATWA SERIES 22: THE RIGHTS OF DRINKING IN ISLAM 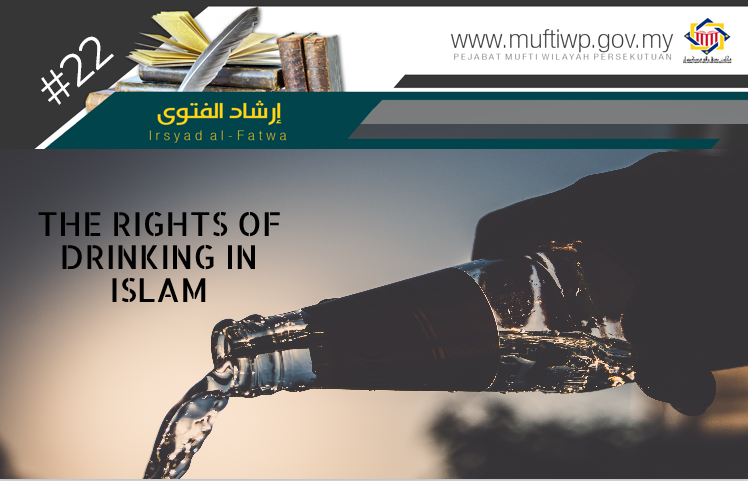 What is the ruling for the right to drink in Islam? Is it permissible for me to drink any water I find in a container? What about the ruling of drinking and bathing in rivers?

Islam is a comprehensive religion which discusses all aspects of life from the most trivial matter to matters of great importance. The companions of the Prophet PBUH stated that the Prophet PBUH even taught them matters regarding bladder and bowel movement. This proves the comprehensiveness of Islam.

The Ruling for the Right of Drinking

The ruling for the right of drinking is according to the type of water. There are four types of water:

Everyone has a right of drinking and watering water. It is used in any form for it is not owned by anyone. The right of using sea water is the same as the right of using or benefitting the sun, moon and air.

For vast rivers such as the Nile, Euphrates and others, humans have a right to drink or water. The reason is, it is permissible for everyone to use and water as long as it does not harm or endanger others, for according to an Islamic legal maxim, preventing harm is an obligation. Although benefitting from something is permissible, however, the permissibility depends on the absence of harm to others such as damaging, polluting and demolishing river banks that could lead to destruction on the lives of humans and crops.

For water trench or stream privately owned by a village or a group of people in a vicinity, every resident has a right to drink (not to water) for it is a basic need. Furthermore, following the principles, water is a joint ownership as stated in a hadith:

“The Muslims are partners in three things: water, pasture and fire, and their price is unlawful.”

Collecting and transferring water to another place is permissible in syarak and water is a necessity for every human being. Thus, if it is prohibited for people to take water, then it will be a huge burden for them. However, if the water trench or stream is located through an owned land, then the owner has a right to restrict others from taking the water without his permission if there are other nearby water sources.

If there are no other water sources nearby and the owner restrict others from taking the water in his land, then it is permissible for the people to take the necessary water needed even if it is by force. This opinion is based on the statement of Umar: “Why did you not use force?”

The reason is water, whether it is from a well or stream is not excluded from the principles of matters which is permissible and owned.

The strongest opinion states that the public has a right to benefit from it for their daily needs such as for drinking, washing, ablution and others, for preventing the public from benefitting from water is a form of oppression and an inhumane action. The Prophet PBUH said:

Another strong opinion regarding water trench or stream states that the owner has a right to restrict others from taking water to water plants or crops without his permission.

The same goes for the right of drinking, if its usage is excessive, for example, a large volume of water is used for drinking water for farm animals from water trench, most scholars including scholars of madhhab Hanafi are of the opinion that the owner has a right to restrict its usage for it does not bring harm to others.

Stored water in containers such as a pail is owned by the person who stored it. Others do not have a right to drink or water, except with the permission of the owner.

However, in desperate situations that could lead to death when there are no other water sources available, then a person can take the stored water, the same as explained for watering matter.

Hopefully, we all understand the rights of life included in this chapter of drinking.