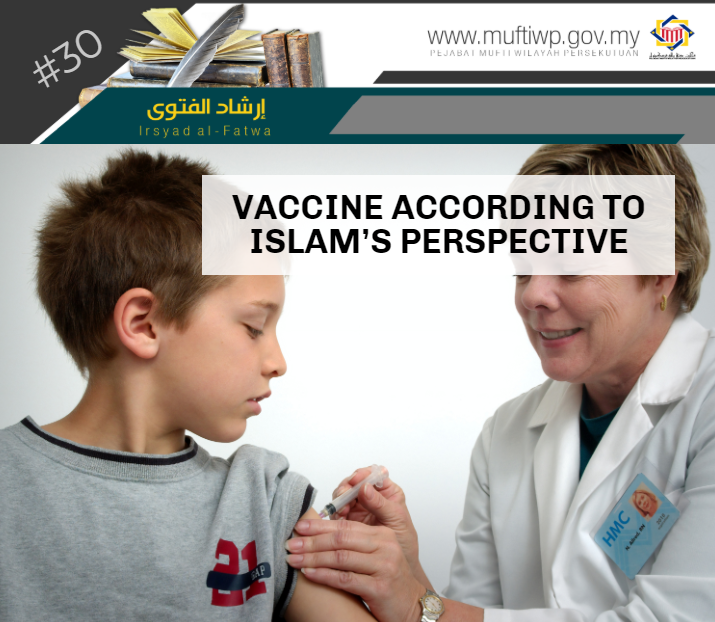 I was previously invited to the National Symposium discussing Islam in Science and Medical Health. Thusly, I would like to detail the discussion in this series of Irsyad Fatwa so that it would provide a clear understanding to us all.

What’s interesting is, a person with strong faith does not only mean he is strong spiritually but also physically. A high spiritual level will protect people from the illness of the heart that will, in turn, strengthen the immunity of the body. According to al-Qudah (1987) there are several researches conducted that prove the status of a person’s psychological and spiritual level affect the healing process to several organic illnesses.

The word vaccine originates from the Latin word vacca (cow) and vaccinia (cowpox). A vaccine is an antigenic material that is used to produce an active acquired immunity of a certain disease that could prevent or decrease the infection of the natural or “wild” organism. A vaccine can be made from weakened virus or bacteria which are no longer infectious. A vaccine can also be made from dead organisms or purified forms of protein, peptide, or particles similar to a virus or bacteria. The vaccine will provide an active acquired immunity for humans and animals to be immune against the attacks of a certain pathogen, especially bacteria, virus or toxins. A vaccine could help the immune system to fight against degenerative cells (cancer). Vaccination or inoculation stimulates the immune system of the body to produce specific antibodies to protect the body from diseases that could be prevented through vaccination. There are several types of vaccine. However, no matter what type it is, the function is the same, which is to stimulate the immune response.

Among the types of vaccines are:

A live vaccine made from weakened bacteria or virus where the virulence is weakened through repeated cultures, however, it can still stimulate the same immunological response of infections which happens naturally.

A vaccine made from several types of bacteria which causes a disease by injecting the weakened toxoid into the bloodstream.

There are 2 types of vaccine; either live or dead. To produce a live vaccine, the live virus must be weakened by injecting the virus into the tissues and blood of animals (such as the kidney of monkey and dog, chick embryo, bovine fetus serum, rabbit’s brain, pig’s or horse’s blood and pustule of cowpox) several times (through a gradual process) of approximately 50 times to decrease its potency.

Harmful effects of the vaccine on a human body are stated by several prominent figures, among them are:

Vaccine: History, Hope and Its Future in Malaysia

Immunizations have a great impact on the health of children. It is the easiest and cheapest method of disease prevention in children. Immunization services in Malaysia have started since the time of the British colonization in the year 1868. At the time, only smallpox immunization is given. It starts in the Straits Settlements and it is given by the headmasters – Malay headmasters in a Malay community. In the year 1950, smallpox immunization is given to the whole country. It is an effort of the government to eradicate smallpox at the time, immunizations are made compulsory and who fails to get it will be fined RM 1000. The mass immunization managed to decrease the outbreak of smallpox and afterwards, smallpox was successfully eradicated in the year 1980.

In the early 1990s, a vaccine for diphtheria and tetanus are introduced; these diseases have a high mortality rate. With the advancement of technology, in the year 1961, the BCG immunization to prevent tuberculosis is given as the country’s effort to control the disease. Poliomyelitis immunization starts in the year 1972 after the outbreak of the disease is reported the previous year. In the same year, the Ministry of Health Malaysia (MOH) starts the National Children Immunization Program organized with the cooperation of the World Health Organization (WHO).

To date, immunizations under the Immunization Program MOH are given to prevent 12 types of diseases. This service is provided for free in Government Medical Clinics. While immunizations service given by private clinics and hospitals covers a wider range of diseases. However, customers will have to pay for the vaccine and consultation costs. See Vaksin: Sejarah, Harapan dan Masa Depan Di Malaysia (Vaccine: History, Hope and Its Future in Malaysia) by Dr Rohani Jahis, MOH.

The Ruling of Using Vaccine as a Preventive Measure Against Diseases

“There is a remedy for every malady, and when the remedy is applied to the disease it is cured with the permission of Allah, the Exalted and Glorious.”

"He who eats seven 'Ajwa dates every morning, will not be affected by poison or magic on the day he eats them."

This includes preventive measures against a disease before it happened. The same is for when there are concerns of a certain disease or infection in a certain place or anywhere else, then it is not an issue, for it is included as a prevention. The same for a disease that needs treatment and also a disease that is trying to be prevented.

The modern terminology used is quarantine.

The Advantages of Preventive Measures Against Diseases in Islam

According to al-Qudah (1987), the principle of prevention of diseases in Islam has several advantages, among them, are:

The principle of prevention in Islam is sourced from the revelation of Allah SWT and the sunnah of the Prophet PBUH. If we review it, the principle is included in several syarak rulings that have always been practised by Muslims regardless of whether there are medicinal benefits. There are several civilizations before the emergence of Islam in the Arab Peninsular. The Arab land is surrounded by two huge civilizations during the time; Rome and Persia. However, if we analyse the ruins and history of both these civilizations, it can be said that there are no evidences that showed that they practise any medical preventive measures. In short, Islam is the pioneer in the principle of medicinal preventive measures against diseases.

Islam does not need anything to support the guidance that it contains. However, with the advancement of science and technology, the truth of the teachings of Islam are becoming apparent. This can be seen regarding the principles of prevention measures against diseases in Islam is in line with today’s scientific discovery. Thus, this increases and reinforces the faith of the Muslim ummah on the truth of Islam.

The principle of prevention of diseases in Islam is an easy step to employ. It does not call for huge financial budget nor a long time to be realized in society.

The Ruling of the Usage of Vaccine

Several Fatwa Regarding the Usage of Vaccines in Malaysia

107th National Muzakarah Council Fatwa Committee on Islamic Religious Affairs Malaysia which convened on 10-11 February 2015 has discussed the Ruling of the Usage of Menactra ® vaccine. The Muzakarah has decided as the following:

81st National Muzakarah Council Fatwa Committee on Islamic Religious Affairs Malaysia which convened on 31st March 2008 has discussed the Ruling of the Usage of Biothrax and Rotateq Vaccines Which Contain Elements of Swine in Their Production Process. Muzakarah has decided the usage of both BioThrax and RotaTeq vaccines is impermissible because:

“And why should you not eat of that upon which the name of Allah has been mentioned while He has explained in detail to you what He has forbidden you, excepting that to which you are compelled. And indeed, do many lead [others] astray through their [own] inclinations without knowledge. Indeed, your Lord – He is most knowing of the transgressors.”

Among the evidences that Islam emphasized the maintenance of health is as the following:

Al-‘Aili Abdul Hakim in his book Mausu’ah Huquq al-Insan fi al-Islam, state that maintaining the health of an individual is a commandment of religion and life, where it will benefit the whole lives of the Muslim ummah. In this issue, a vaccine is no longer a choice but a necessity of the general public. The phenomena where parents are reluctant or refuse to get their children vaccinated in clinics is worrying. This action is harmful not only for their children but also for our future generation, for it could be the cause of an outbreak of dangerous diseases.

In this matter, Islam emphasizes the safety of humans. When implementing or deciding on something, it must not contradict the maslahah (benefit) of the ummah and Maqasid Syar’iyyah which is to protect the religion, life, intellect, lineage and property. According to jurists, any disease should be prevented, treated and medicated. In the context of the prevention of any form of outbreaks that could harm the health and lives of people, this is the priority of the teachings of Islam.

Hopefully, this explanation will ease our worries in permitting the usage of vaccine by the Ministry of Health Malaysia for the maslahat (benefit) of our society.