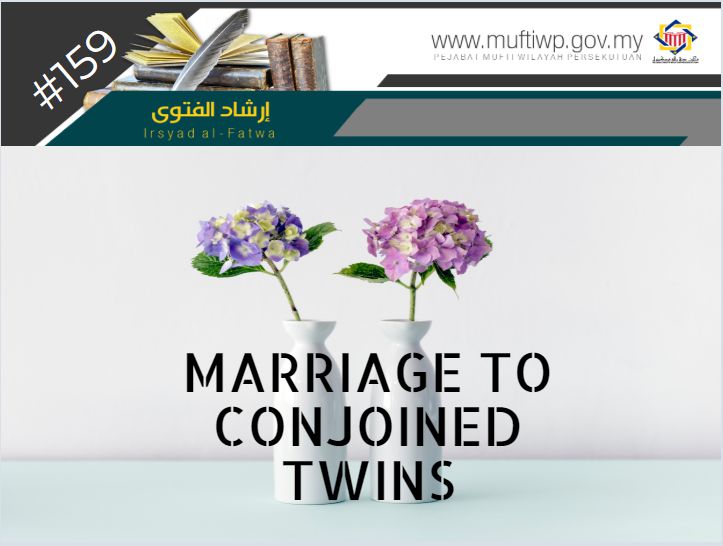 What is the ruling of someone marrying conjoined twins?

‘Nikah’ or also known as marriage literally means meet, assemble and mixing together. According to syarak, it is ‘Ijab and Qabul (‘aqad) which make it permissible for the man and woman to have intercourse. It is done through words meant for marriage, in accordance with the conditions set in Islam.

Evidences of the Sanctioning of Marriage

“Then marry those that please you of [other] women, two or three or four.  But if you fear that you will not be just, then [marry only] one or those your right hand possesses. That is more suitable that you may not incline [to injustice].”

The desire for marriage is natural for humans created by Allah SWT. Each adult human, physically and mentally healthy would need a partner of the opposite gender, a partner who can fulfil human’s biological needs and the need to love and be loved, and to work and live together peacefully and be happily married.

"O young people! Whoever among you can marry, should marry, because it helps him lower his gaze and guard his modesty (i.e. his private parts from committing illegal sexual intercourse etc.), and whoever is not able to marry, should fast, as fasting diminishes his sexual power."

The Ruling for Marriage

The ruling for marriage is divided into 5:

If someone is able and have the financial means to pay dowry and provide for his wife (maintenance; expenses and well-being). He has no intention of harming or mistreating his wife if they were to marry. Furthermore, he is certain that he would fall to sin (fornication) due to his strong sexual desires if he does not marry.

For people who are able but are able to control themselves from falling into sin. This is the original ruling for marriage.

For someone who is able and certain he would not commit fornication if he does not marry.

When someone is worried that he would mistreat his wife, or if he has a physical weakness, and he is unable to fulfil his wife’s conjugal rights then, even if he is able to financially provide for her it is makruh for him to get married. It is also makruh to get married during wars.

For someone who cannot fulfil his wife’s financial and conjugal rights and is certain that he would mistreat his wife.

Medically speaking, conjoined twin is a monozygotic twin, where the fertilized egg is separated partially (fission). This happens when the zygote started to separate 12 days after fertilization but failed. It is an extremely rare phenomenon, the occurrence is estimated to range from 1 in 49,000 births to 1 in 189,000 births, with a somewhat higher incidence in Southwest Asia and Africa. Approximately half are stillborn, and an additional one-third die within 24 hours. Most live births are female, with a ratio of 3:1.

Most conjoined twins nowadays are assessed for surgery to separate them into two separate functioning bodies. The separation surgery ranges from easy, to very difficult, to almost impossible depending on the organs or important structures that they share, such as, brain, heart and liver.

The History of Conjoined Twins

During the rule of Caliph Sayyidina Umar bin al-Khattab, there was a girl born with two legs, two vaginas, two bodies, four hands and two complete heads. One of the them asked to get married. Whereas, the other half does not wish for a marriage. The matter was brought to Amirul Mukminin Umar bin al-Khattab to resolve it. He then assembled all his Companions to discuss the issue. However, none of them are willing to decide on a ruling regarding the issue. Sayyidina Umar then ask Sayyidina Ali RA regarding the matter. Sayyidina Ali replied: “Leave the twins for three days.”. After three days, the twin that wanted to get married died. Thus, Sayyidina Umar decides to surgically remove the dead twin’s body. However, the twin who is alive refuses saying, “Do you want to kill me?”. Sayyidina Umar now faced a quandary. Not knowing what to do, he consulted with Sayyidina Ali RA again. Sayyidina Ali RA responded: “Leave the twin for three days.”. And after three days, the other twin also died and thus, the matter is resolved.

According to Islamic jurisprudence, the situation for conjoined twins can be viewed as the following:

The Opinion of Early and Contemporary Scholars

There are several opinions of early and contemporary scholars regarding this issue. We detail their opinions as follows:

According to the above opinions of scholars, we are inclined to state that marriage to conjoined twins is not permissible if they cannot be separated, for the great problems that they would face. This opinion is built from the following basis:

Thus, let all us pray to be blessed with pious and obedient children that would be the source of calmness of our hearts, who will in turn contribute to our religion, race and country. Amin.