IRSYAD AL-FATWA SERIES 214: THE RULING OF SENDING SUPPLICATION (DOA) TO THE HOLY LAND 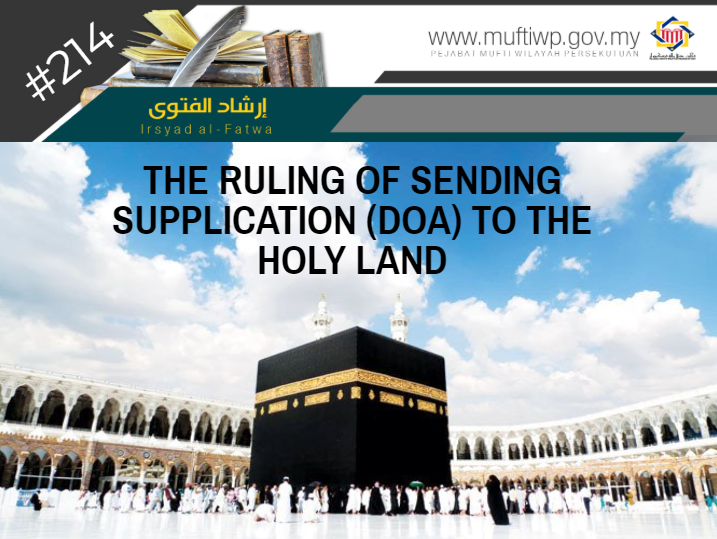 Alhamdulillah, praise and thanks to Allah SWT for the countless blessings He has blessed us all with. Blessings and salutations to the prophet Muhammad PBUH, his family, companions and all those that follow his teachings.

The act of supplication (doa) is a form of worship that is encouraged in Islam. There is a lot of Quranic and prophetic evidence that explains the importance of supplication to Allah SWT. One of it is a hadith from An-Nu’man bin Basyir RA, the Prophet PUH said:

And then he recited the verse of Allah SWT:

Imam al-Hafiz Ibn Kathir Rahimahullah when commenting on this verse cited the words of Imam Sufyan al-Tsauri: “O the beloved servants of Allah SWT, they are among those who ask to Him and they ask a lot. And among the people that receive Allah SWT’s wrath is those that did not ask to Him.”

He also includes the words of a poet: “Allah SWT’s wrath befalls those who didn’t ask from him. Whereas the son of Adam is angry when others ask something (from him).” See Tafsir al-Quran al-Azhim, Ibn Kathir (7/156).

There are a few manners and situations that should be observed for Allah SWT to grant what we ask from Him. We detail the manners in supplication as the following:

“Indeed, they used to hasten to good deeds and supplicate Us in hope and fear, and they were to Us humbly submissive.”

The same is stated in a hadith from Abu Hurairah RA, where the Prophet PBUH said:

“Call upon Allah while being certain of being answered, and know that Allah does not respond to a supplication from the heart of one heedless and occupied by play.”

One of the manners of supplication is to glorify and praise Allah SWT before asking for anything. To give a simple example is by analysing Surah al-Fatihah. This is in accordance with a long narration by Abu Hurairah RA, where he said the Prophet PBUH explains about the recitation of al-Fatihah in prayer. Allah SWT divided the prayer into two parts; one is for Him and the other for His servants.

It is clear in Surah al-Fatihah where there are five praises in the first few verses until the fifth verse from Allah SWT. Then on the sixth verse, it is followed by a request or the first supplication, which is:

“Guide us to the straight path,”

The same is mentioned in another verse of the Quran where Allah state the supplication of the Prophet Abraham AS, he begins his doa with:

“Who created me, and He [it is who] guides me. And it is He who feeds me and gives me a drink. And when I am ill, it is He who cures me. And who will cause me to die and then bring me to life? And who I aspire that He will forgive me my sin on the Day of Recompense."

All the phrases above if studied would show that it is the praises of a servant to his God. Thus, the Prophet Abraham AS did not stop with these five praises but also added five requests to Allah SWT, as recorded in the Quran:

"My Lord, grant me authority and join me with the righteous. And grant me a reputation of honor among later generations. And place me among the inheritors of the Garden of Pleasure. And forgive my father. Indeed, he has been of those astray. And do not disgrace me on the Day they are [all] resurrected –”

Hence, it is understood through the Quranic evidence that we should begin our supplication with praises to Allah SWT.

Supplication in the Holy Land

Making doa in the holy land is undeniably a great act of worship and has its own benefits and priorities. Here, we share the statement of Imam Ibn Rajab al-Hanbali Rahimahullah from his book Lathaif al-Ma’arif (pg. 269) that states:

There is an increase or amplification for the rewards of worship for several reasons as stated below:

First: The honor of a place where the worship is performed, for example, the holy land. This is the reason why praying in the two great mosques in Mecca and Medina would result in the manifold of rewards. This is in accordance with a sahih hadith from the Prophet PBUH, where he said:

“Prayer in this mosque of mine is better than a thousand prayers. or. is like one thousand prayers observed in other mosques besides It, except that it be in al-Masjid al-Haram.”

To close, we hold the opinion of the act of asking the chosen people of Allah SWT to perform worship in the holy lands to make good doa for us, while they are there, which is known as sending supplication in our culture is permissible. We would like to share the narration from Saidina Umar al-Khattab RA, where he came to ask for permission from the Prophet PBUH to perform umrah, and the Prophet gave his permission and said to Umar:

“My younger brother, do not forget me in your supplication.”

We would like to add that, at the same time, we ourselves should not neglect our supplication in our own country, following the manners that have been stated above. May this explanation give us a clear understanding of religion. Ameen.